The project designed by the C+S Architects studio for the urban regeneration of the former Royal Cavalry Barracks complex in Tervuren, Belgium, has received a green light. The project designed by the Italian firm received all the necessary authorisations and work is expected to begin shortly on the restoration of the historic complex immersed in the centuries-old park, together with the development of new residences, offices and services for the local community. 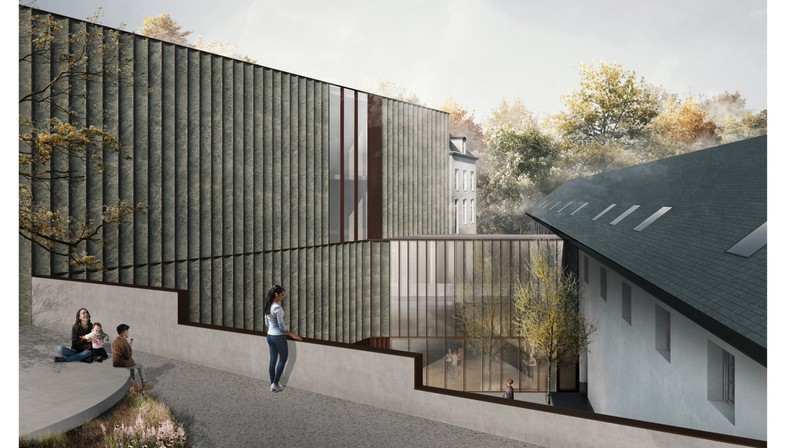 The C+S Architects studio, founded by architects Carlo Cappai and Maria Alessandra Segantini, has won the international competition for the urban regeneration of the former Royal Cavalry Barracks in Tervuren, Belgium. The project, which covers an area of nearly 37,000 square metres, has recently received all the necessary “green lights”, including authorisations from Belgium’s Monumental Heritage and Landscape Protection Authority. The works, for which a total investment of approximately 100 million Euros is expected, are set to begin shortly. “The project”, as explained by the C+S Architects studio, “involves the restoration of the horseshoe-shaped historical complex immersed in the centuries-old park, which also includes the recently inaugurated Royal Museum of Central Africa and the Orangerie building. These will be transformed into hospitality buildings, with a luxury hotel offering 108 rooms, restaurants, common rooms and a spa (also open to the local community), as well as residences, offices and services”.
The architects paid very close attention to the design of the public space, creating a series of urban micro-squares and a large raised square. The team of architects and designers from the C+S Architects firm came to these solutions and ideas following a very careful study of the historical documentation available and the various transformation processes that the existing complex has undergone over time. The study conducted, in fact, allowed the team to identify the specific points where the new urban micro-squares could be inserted, therefore starting an urban stitching process, so to speak, that enables urban continuity. The starting point was precisely the “reinvention of the public space as a space for playing, resting, local markets and entertainment”. These elements have therefore become the backbone of the project, while the raised square represents an important and happy design solution, as it also conceals the bulkier volumes of the parking lots and of the spa from the users’ view, hidden thanks to the difference in height. 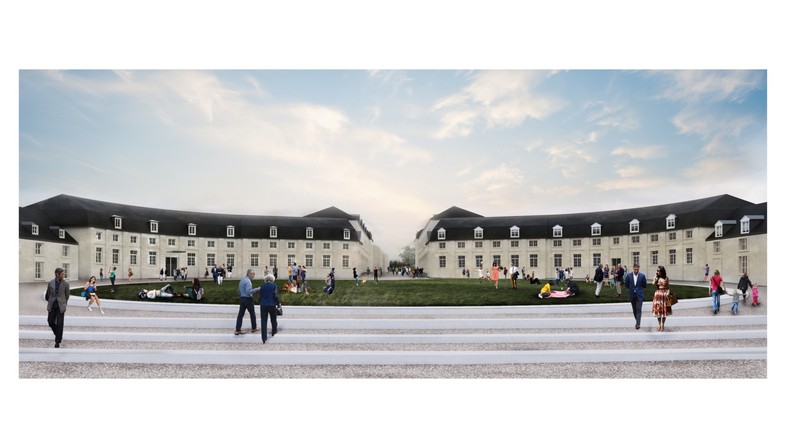 As the architects explained, ““we have always been particularly interested to address the relationship with the memory and identity of places, trying to create a dialogue between the techniques of the past and the contemporary world”. Examples of this approach are certainly not lacking. To establish a visual dialogue between new and old, for example, the architects re-proposed the original elements of the historical façades, like the shingle crowning or the window frames, in a contemporary key and relying on new materials. In the first case, slate has been replaced by oxidised zinc, while in the second, the frames will be created “in discontinuous prefabricated concrete elements, with fillings in a white Venetian plaster finish”. Another important aspect is that once completed, the project will return to the citizens of Tervuren a part of the city that was previously closed off to them. The complex of the former Royal Cavalry Barracks is, in fact, delimited by a continuous enclosure closed off to the public, which, thanks to the project designed by the C+S Architects firm, will open up to the city again, with a new passage point in the pre-existing historical wall. In correspondence to this element, the architects designed a small bridge that will allow visitors to cross a pond. A new body of water which, in addition to playing an important water collection function, will become part of the system of small lakes in the area, completed by the large lake immersed in the centuries-old park. 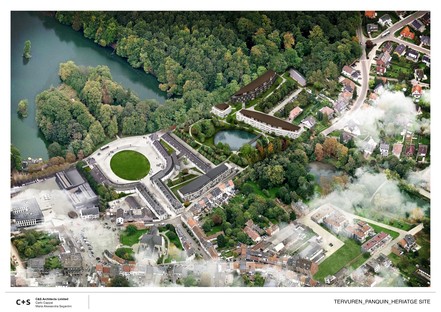 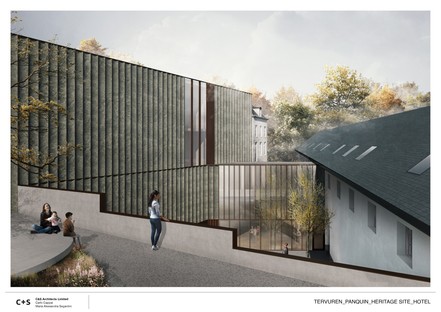 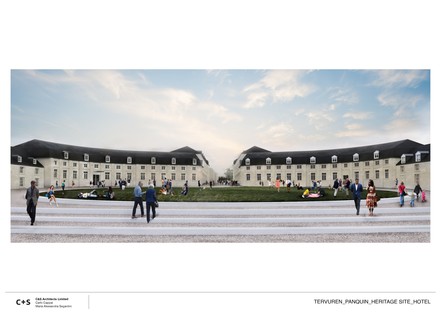 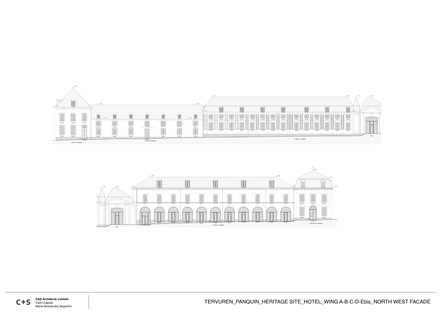 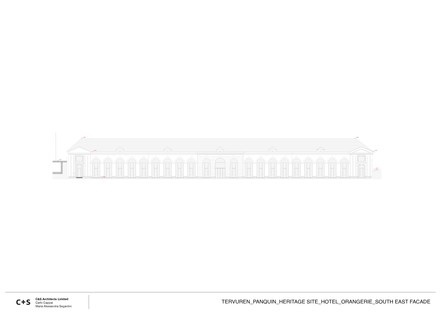 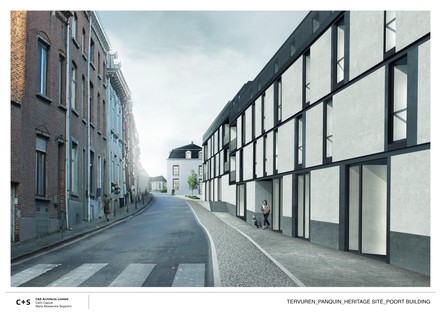 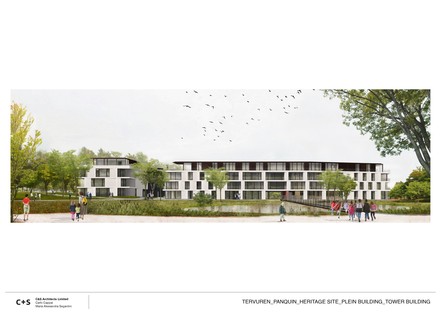 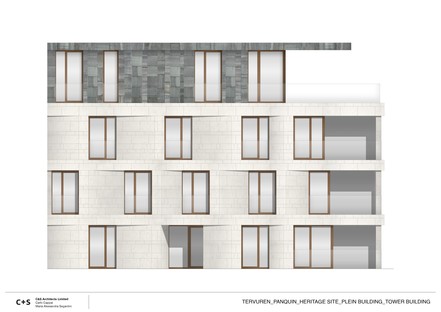 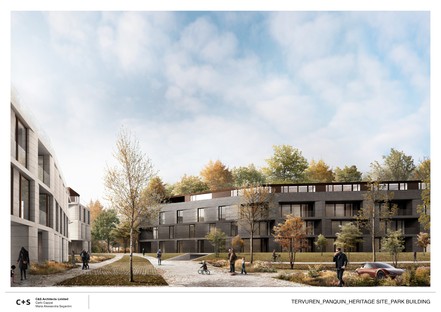 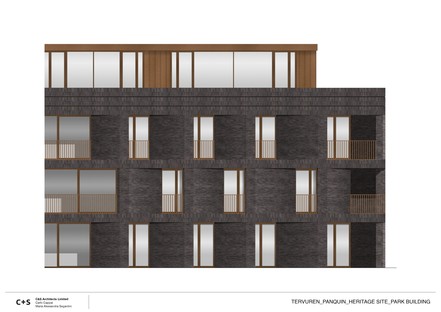 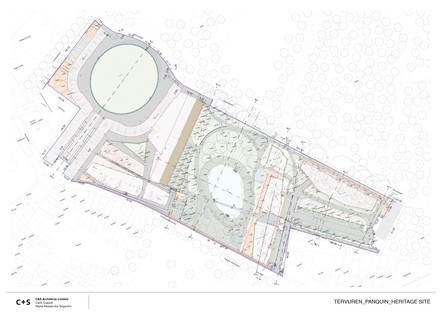