The multimedia library and cultural centre designed by Chapuis Royer Architectures in Montbonnot Saint-Martin, near Grenoble, France, revitalises the historic 13th-century priory of Saint-Martin. Concrete and corten steel are the materials the architects use to work on the site, which is a particularly complicated one in terms of its topography and wealth of existing historic and architectural constructions. The result is thorough restoration of these existing constructions with a new, boldly contemporary expansion that fits harmoniously into its surroundings and establishes a dialogue between the new, the old and the natural landscape around them. 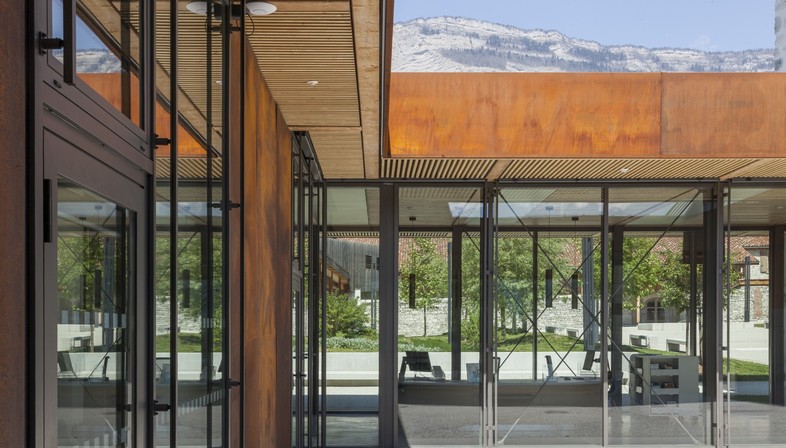 Chapuis Royer Architectures designed a new multimedia library and cultural centre in Montbonnot Saint-Martin, a small town in the French department of Isère, not far from Grenoble. An ancient village with a history of wine-making, Montbonnot Saint-Martin has grown in importance in the agglomerate of Grenoble over the years thanks to important industrial development, which has not, however, altered its rural character: the town still preserves its historic and architectural heritage and has a pleasant atmosphere on a human scale. Located on the right bank of the Isère River, it is surrounded by the massif of the Chartreuse foothills of the Alps to the north and the Belledonne mountain chain to the south. Its relationship with its natural surroundings and with the town’s historical and architectural heritage is a key element of the new multimedia library project by Chapuis Royer Architectures. The architects were appointed by the local government to build a new cultural centre for the young, a multipurpose hall and a multimedia library on a historic site dating back to the 13th century, the old Priory of Saint-Martin. The same area is home to the Maison des Arts, a building completed in 2014 and used for social and cultural activities such as theatre, dance and music, built in the 16th and 20th century constructions in the same historic complex.
The architects therefore found themselves working on a particularly complicated site, in terms of both topography and the wealth of its historic and architectural heritage. The result is painstaking restoration to protect the remaining portions of the old buildings with construction of a new, boldly contemporary expansion that fits harmoniously into its surroundings and establishes a dialogue between old and new and with the natural landscape around them.

Chapuis Royer Architectures recently completed two more projects in the Grenoble area: Diderot university restaurant and expansion of the Institut d'Etudes Politiques on the campus of the Université Grenoble-Alpes. The three projects have one thing in common: use of materials such as concrete and corten steel, which the architects consider the best materials for building dialogue with the nature of the place and, in the case of the library, with the historic constructions dating back to the 13th century. The old stone parts of the priory provide the base for the new complex, on which the volume of the expansion covered entirely with corten steel stands.
The presence of a stone base solves the problem of the differences in level present in the area and guarantees continuity with the nearby Maison des Arts building, constructed in stone in the lower part and wood in the upper part.
An entirely glassed-in patio mediates between the old stones of the priory and the new expansion, while permitting enjoyment of panoramic views over the natural setting of the surrounding mountains. 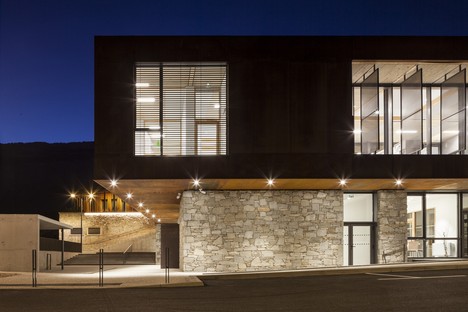 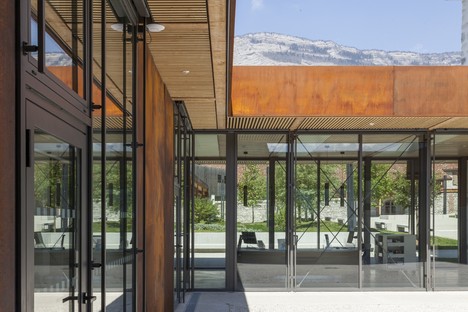 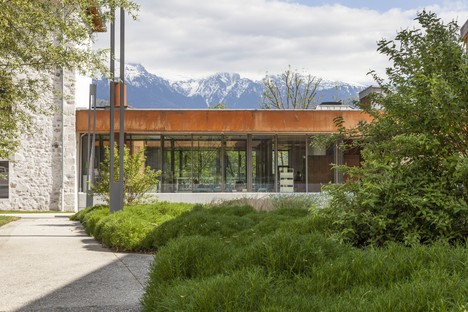 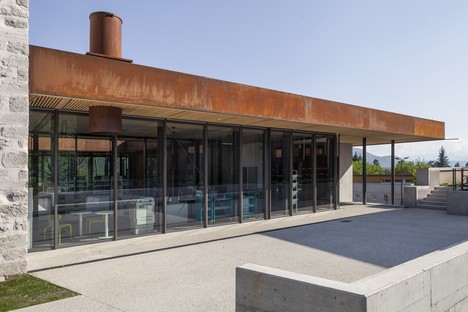 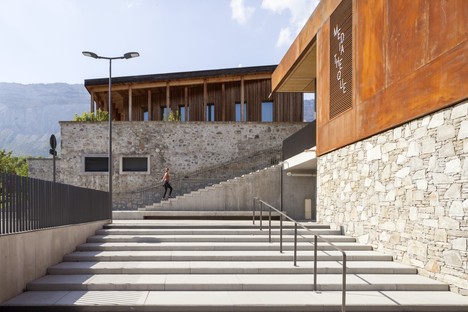 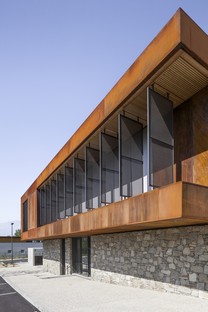 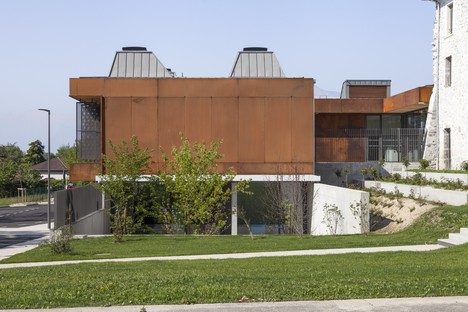 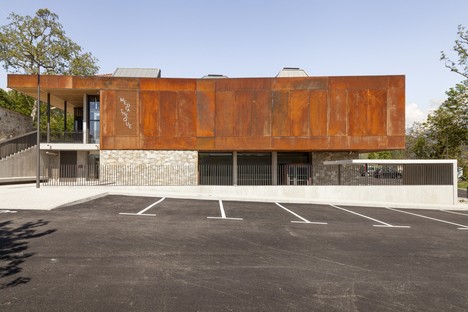 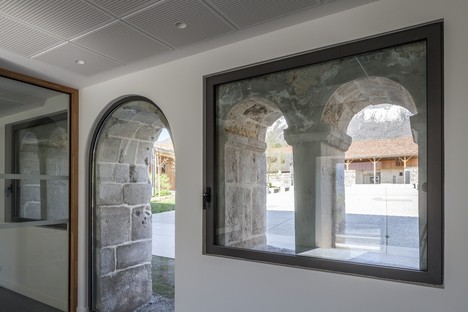 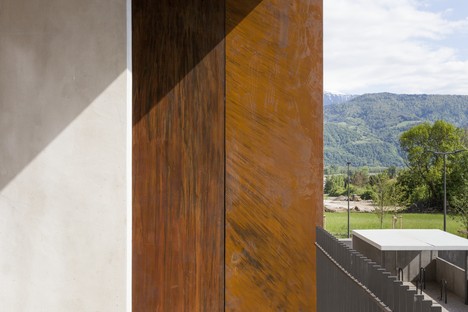 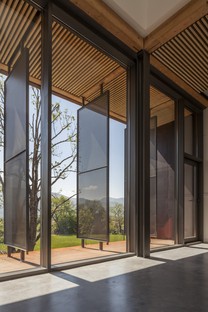 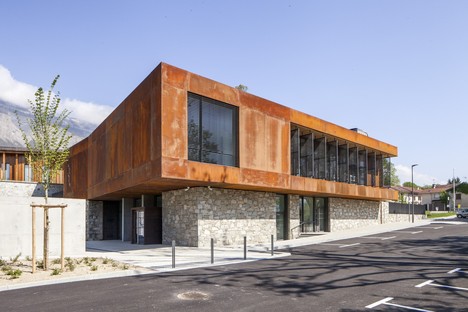 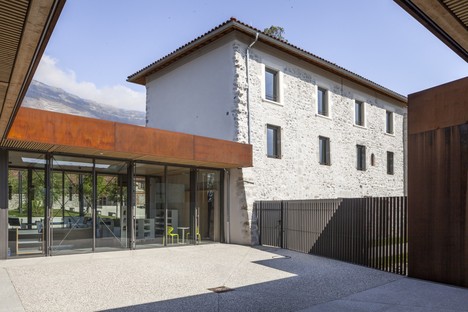 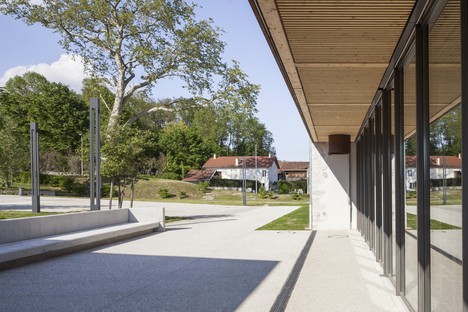 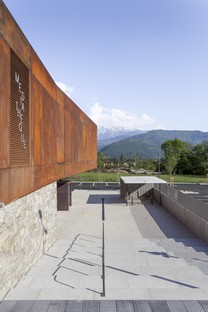 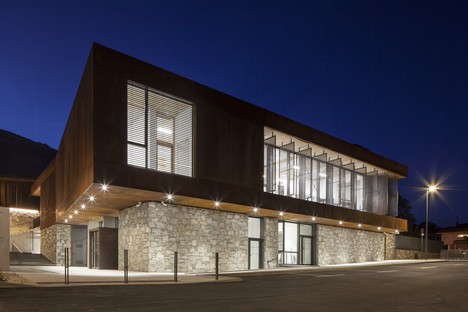 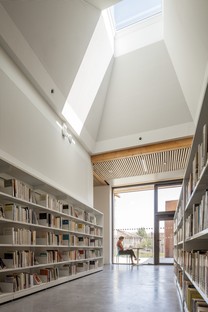 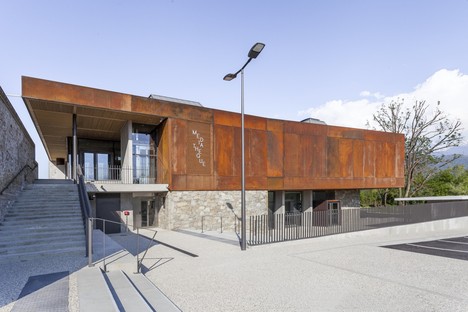 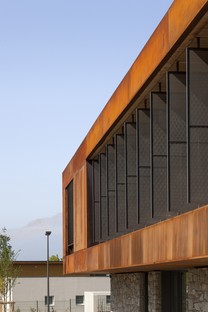 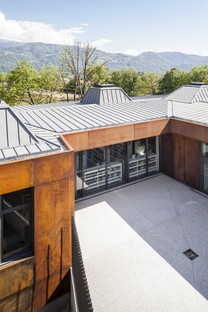 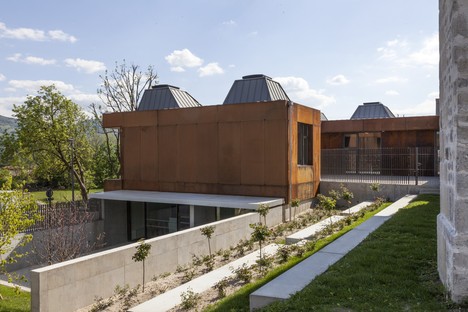 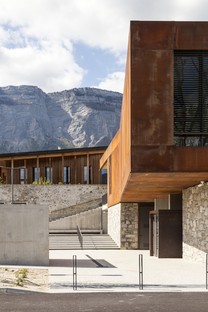 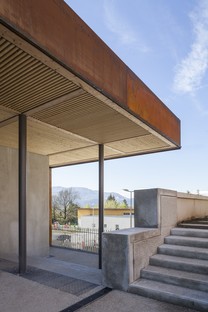 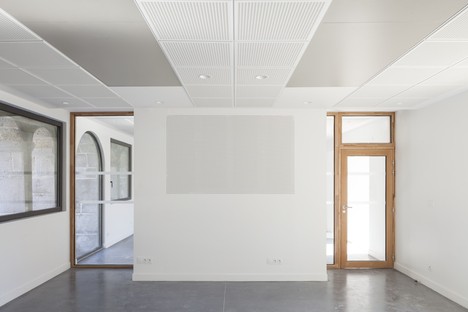 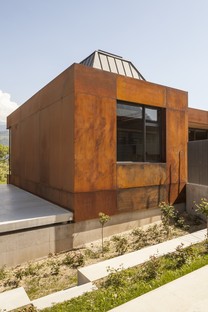 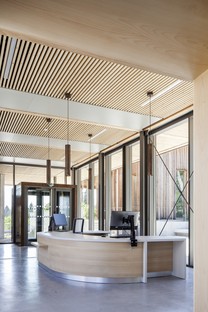