Shortlisted for the 2017-2019 Aga Khan prize, Jarahieh School for Syrian refugee children in Lebanon is an example of the power of the environment and architectural design in constructing a sense of belonging, the result of a participatory design process conducted by CatalyticAction. 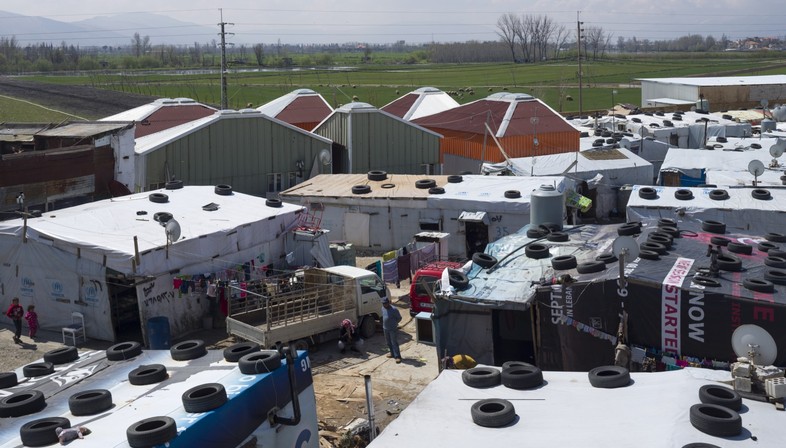 The architects of CatalyticAction coordinated a world-class design team of major international players and individuals in the construction of the school in Jarahieh, a Syrian refugee camp near Al-Marj, in Lebanon.
CatalyticAction is a non-profit design studio that works internationally, focusing on the most vulnerable parts of the Middle East. Established only 5 years ago on the basis of an idea by three young people of different origins who set up the studio in London, CatalyticAction works on projects that “catalyse” radically positive change in society through architectural design. The strong points of their way of working are participatory design, sustainable architecture and active involvement of social groups in the construction process.
All these values are put in practice in the construction of Jarahieh School for a community of Syrian refugees near Al-Marj, in the Beqa Valley’. According to CatalyticAction, Lebanon hosts one million and eight hundred thousand Syrian refugees who have had to flee their homes because of the war, representing almost a third of the total population of Lebanon. More than 50% of these Syrians are children, and the Lebanese government is unable to provide them with adequate education: in 2016, Human Rights Watch reported that 250,000 school-aged Syrian children registered in Lebanon were not receiving any education.
In response to this situation, NGO Jusoor and non-profit organisation Sawa for Development Aid set up a school, temporarily located under a tent in the settlement of Jarahieh, established by the United Nations High Commission for Refugees (UNHCR). The school taught 320 children a year, but was structurally inadequate in that it could not, for example, protect children against the mud that accumulated on the land in rainy weather, it was poorly lit, and it gave an impression of temporariness.
In the design of the new building housing this important educational project, CatalyticAction’s priorities were creating a sense of belonging, so that the building would appear to belong to the community and vice versa, along with clean interiors, proper climate control, and appropriate lighting and soundproofing. Qualities of this kind might be taken for granted in many parts of the world, but not in Jarahieh, where CatalyticAction focused primarily on solidity, structural simplicity, rapid construction of the building, and the possibility of obtaining materials among the community that would be using the school. It all began at Expo 2015 in Milan, with an installation set up by Save the Children Italia and designed by Argot ou La Maison Mobile, which championed use of the structure for a charitable purpose right from the start. The pavilion with its wooden frame was adapted for the purpose, converting it from an open, permeable structure into a complex of indoor spaces arranged around a courtyard, forming a village within the village of Jarahieh. It was built using OSB (Oriented Strand Board) panels and a fabric similar to the one supplied by the UNHCR for the refugees.
The design of the school got the inhabitants of Jarahieh involved right from the start, in a process involving use of the imagination, focus groups, and interviews with children and adults, teachers, parents and members of associations. This made it possible to develop the project as a choral idea, modified to make use of local labour and skills, thereby supporting small-scale local economies. For the thermal and acoustic insulation, for example, they used sheep’s wool produced and processed by farmers in the Bega Valley, who welcomed the opportunity to learn about new ways of using wool from CatalyticAction.
Use of simple, familiar but appropriate materials, such as wood and the canvases used to build the tents in the camp, established a bond between the families and the school. Instead of constructing a single big building with internal subdivisions, the school is a complex made up of separate classrooms arranged around a courtyard. The school is built on the same scale as the homes, but at the same time it stands out as a visual landmark thanks to the single roofs emerging on the horizon and use of colour. To customise the building and give each class an identity of its own, every classroom is made different from the others, with truncated pyramid roofs at different heights and angles.
The skylights at the ridge of each roof are designed to solve the problem of indoor lighting, as the inclined walls ensure that sufficient indirect light enters the classrooms.
The classroom walls opening onto the internal walkways or the streets of the camp are covered with educational and decorative murals made by the inhabitants themselves, avoiding the anonymous look characteristic of the streets of tent cities and offering a symbol of community pride. 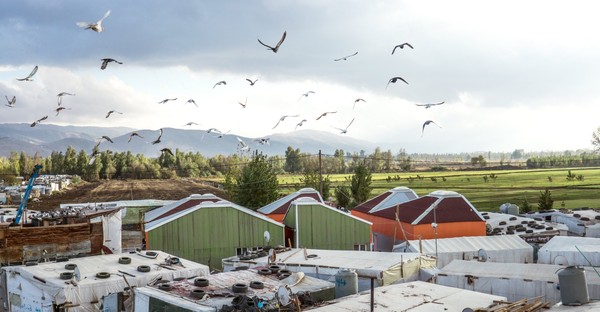 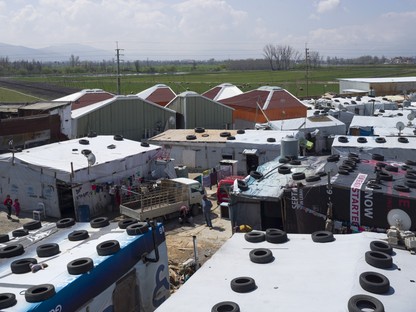 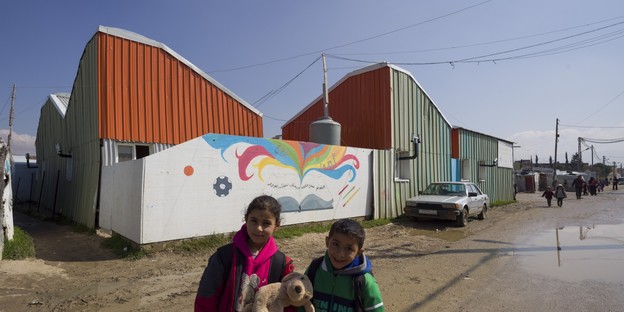 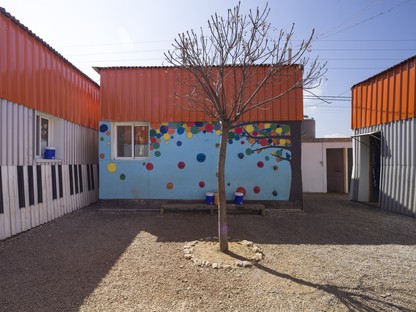 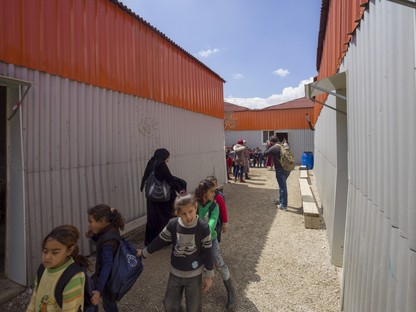 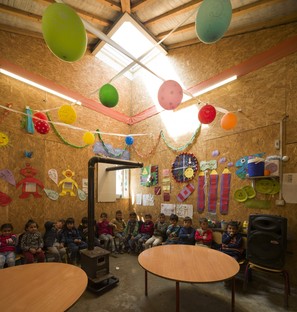 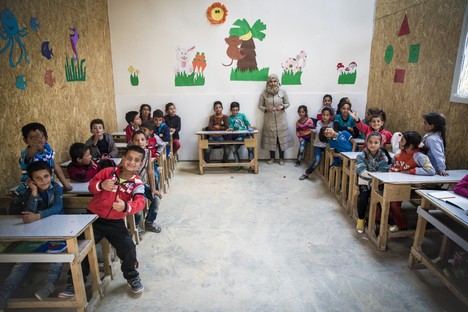 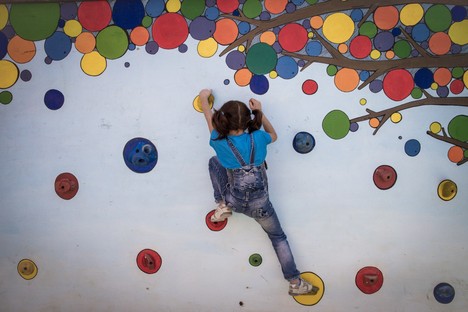 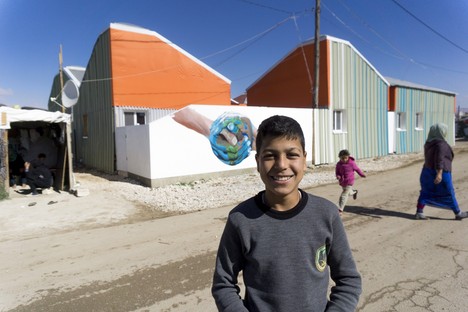 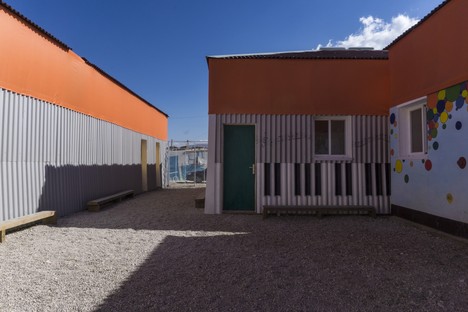 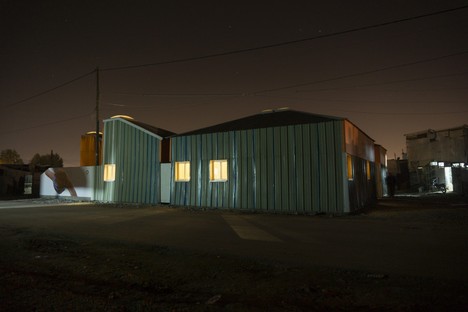 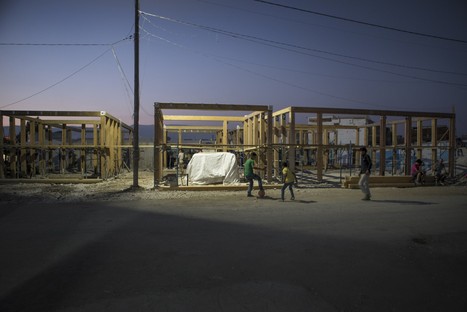 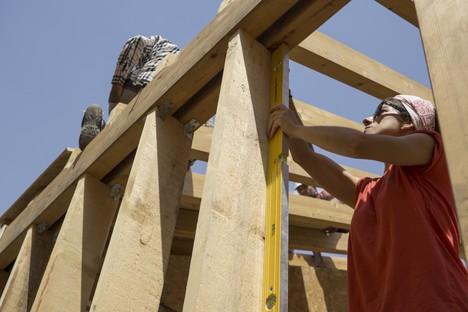 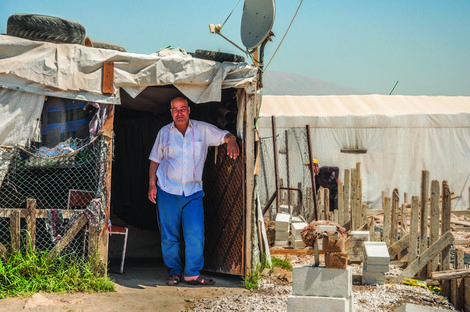 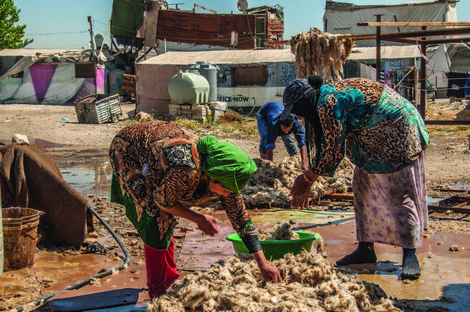 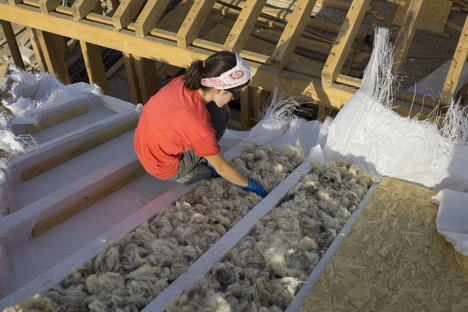 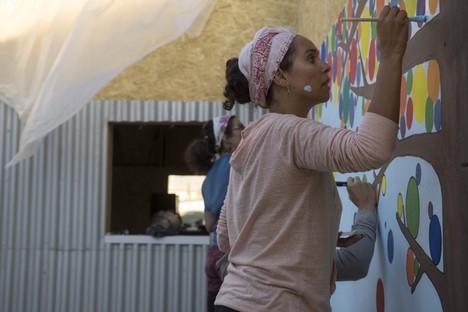 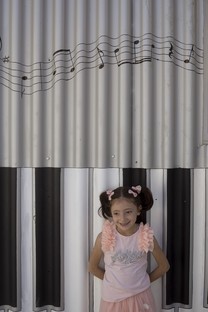 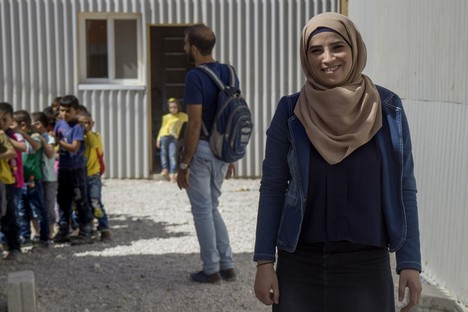 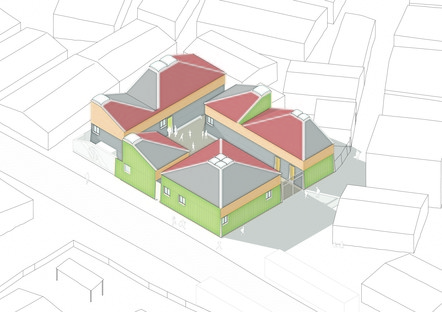 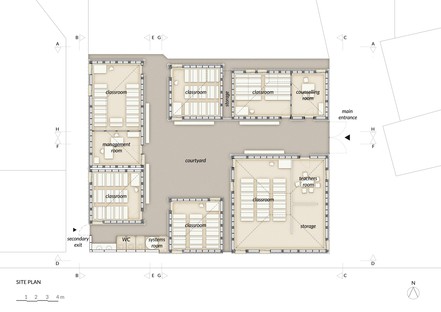 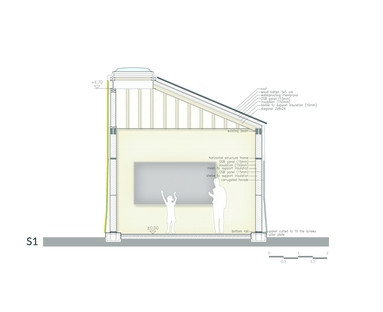