In New York, the Büro Koray Duman architecture studio has designed the new SIMÒ Pizza restaurant. The architects created an interior design focused on three key concepts: the open kitchen as a culinary performance space, a decorative pattern inspired by tradition and the square as a social space. The restaurant is located in Manhattan's bustling Greenwich Village and becomes a celebration of the historic New York district and of Naples, the client's home town. In New York's historic Greenwich Village district the Büro Koray Duman architecture firm has designed the new SIMÒ Pizza restaurant. The architects have designed a space that welcomes one of the most famous Italian culinary traditions in the world – that of pizza – while at the same time becoming a celebration of the historic district of Manhattan as well as of Naples, chef and client Simone Falco's city of origin. The project conceived by the Büro Koray Duman studio gives life to a sophisticated and original space that fits perfectly on the ground floor of the historic University Place building, drawing as much inspiration from the rich history of the Greenwich Village district, as well as from Naples' pizza tradition.
Three key concepts drive the restaurant's interior design: the open kitchen as a culinary performance space, a decorative pattern inspired by tradition and the square as a social space.

The kitchen, in fact, becomes an open and visible environment from the street. Fully exposed as in the tradition of Naples' pizzerias, the food preparation space holds a central position in the planimetric distribution of the restaurant. On the large counter the pizza ingredients and toppings – specially imported from Italy – are visible for customers who can directly assist in the preparation of their pizzas. A direct reference to Naples' small street food kiosks and to the social aspect of the pizza preparation ritual. The open-concept kitchen is also a way to emphasise the authenticity of the culinary preparation, transforming it into a culinary performance to be followed and, if desired, to be learned.
Pizza ingredients are also used as decorative elements in the architects' design. The image of flour packaging becomes a colourful pattern which, revisited as wallpaper, completely covers the walls of the dining area, transforming it into an intimate space with wooden tables and seating. Authentic pizza ingredients and toppings, on the other hand, are also celebrated and transformed into objects of art and as such exhibited on the long wall that extends from the entrance to the dining tables facing the kitchen. For this wall, the architects designed a series of volcanic stone shelves inspired by ashlar, the typical stone finishing that covers the base of Naples' buildings. The shelving, with its angular pattern, adds a sense of thickness and gives three-dimensionality to the wall, while also being echoed in the geometric decor of the original mosaic tile floor. The original building was, in fact, a famous hotel in the neighbourhood, the Albert Hotel, built between the end of the 19th and the beginning of the 20th century. The restaurant's logo has also been transformed into a decorative element which, repeated based on geometric motif, personalises the sides of the long counter and the upper part of the kitchen. An outdoor sitting area with round tables has also been created, surrounded by potted Mediterranean plants and herbs. All the different external and internal elements contribute to creating an ideal square or a courtyard, recreating the social and convivial atmosphere typical of these open spaces. The interior lighting also contributes to enhancing this image: a grid of strung lights suspended over the kitchen illuminates the space, without blocking the view of the decor of the carefully restored historic ceiling. 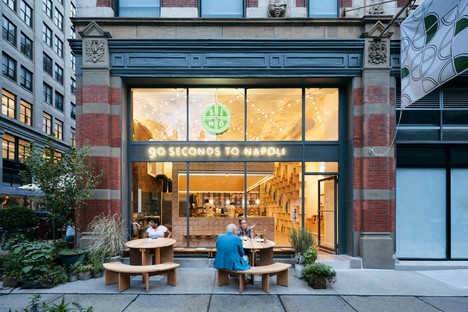 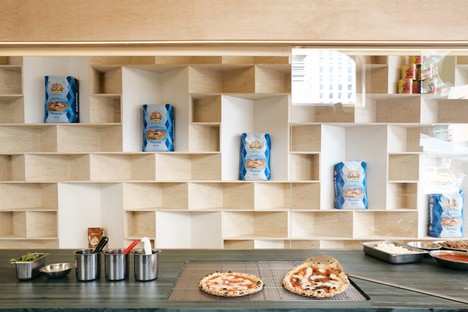 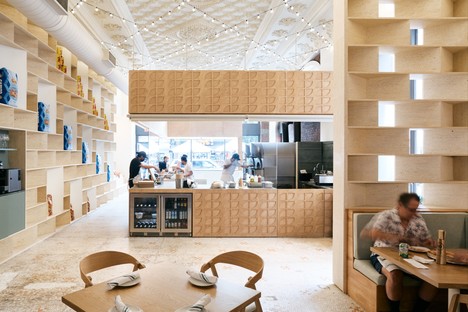 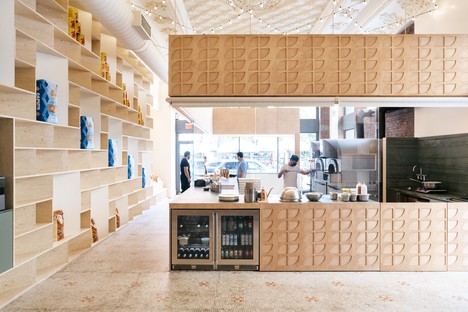 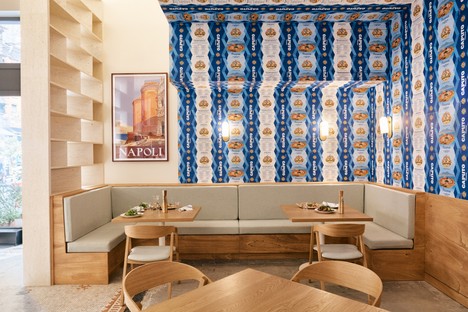 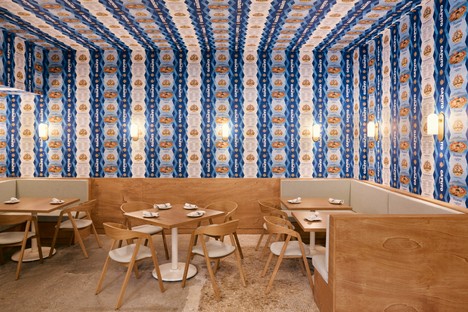 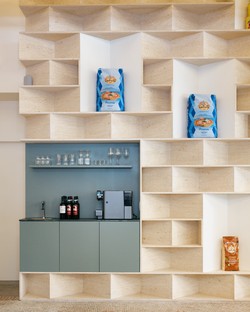 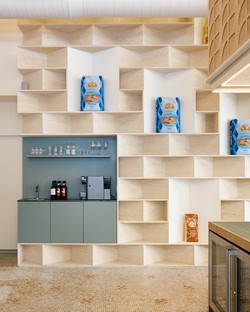 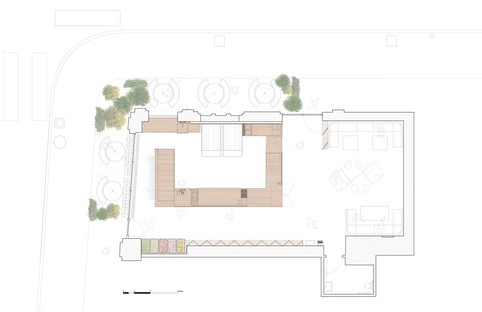