Sunset Chapel, by the Mexican architects of BNKR, stands on the hills of Acapulco, a work packed with religious significance, which the project links to use of materials to valorise the landscape around it. In this project sustainability is defined in terms of respect for the building’s surroundings, which it does not modify but fits into, drawing on them as inspiration for the architectural composition. 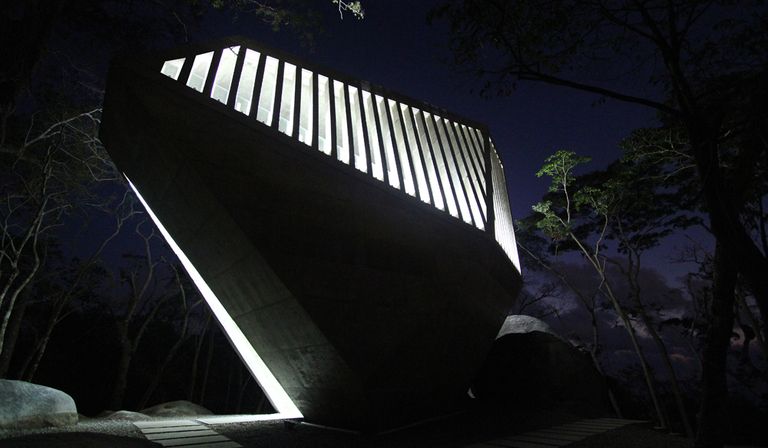 Overlooking the Pacific Ocean, Acapulco Bay seems to open its arms to welcome the tourists and pilgrims who come to the port town in search of a fun holiday or the local mystic tradition. One of Mexico?s best-known beach resorts and an important holiday destination, the town was featured in “Love boat”, the famous television series of the `80s about love stories on a cruise ship that always came ashore in Acapulco. Here, alongside widespread construction of hotels, restaurants and other attractions to satisfy the tourists? most ephemeral desires, there is also a deeply rooted tradition of spirituality which is manifested in the presence of privately commissioned religious buildings. The architects of BNKR, who completed the Sunset Chapel on a hill over the bay in 2011, say that they had already had two commissions of this type in the past, inspired by different requirements: the first was to celebrate a marriage, the second to commemorate the death of loved ones. The religious building is also linked with tourism in the area due to the presence of La Quebrada, the cliff over the ocean where the famous and very dangerous diving ritual is performed, location of the chapel dedicated to Our Lady of Guadalupe, to whom the daredevils pray before jumping. There are a lot of cliffs in the area where BNKR recently completed the Sunset Chapel, and the architects had to deal with the granitic rocks that emerge from the soil. One huge rock resting on the lot obstructed the view of the sea from the chapel, and so the architects decided to overcome this barrier by building the heart of the chapel over it. The building, made entirely out of cement, is in fact organised on two levels, with the completely closed-in ground level acting as the base and containing the stairway for accessing the level above, where liturgical functions are performed. While the ground floor is sealed-in and hermetic, the upper level is completely open to the outside, so that the landscape helps create a mystical atmosphere inside: the side walls are a regular alternation of full and empty volumes formed by openings in the cement which, like so many cracks, offer glimpses of the church?s surroundings as a scenario for the architecture. The usual frescoed walls or mullioned windows are ideally replaced by images of vegetation, the sky and the sea, and no further decoration is necessary. On the main façade overlooking the sea, which is completely open, two panels of frosted glass form a big cross, alluding to the Christian themes of the presence of God in nature and God as everything and infinite.
The iconography inspiring the building is clear, for when seen from outside it appears to emerge from the ground, like one of its granitic rocks: the rough finish of the cement underlines its intention of camouflaging the artificial in the natural. 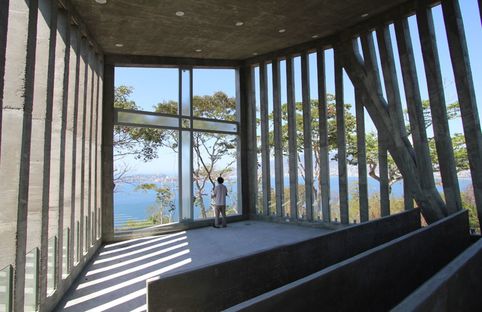 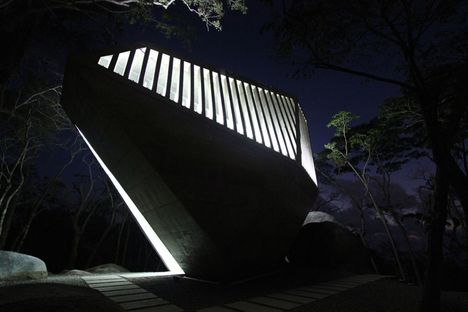 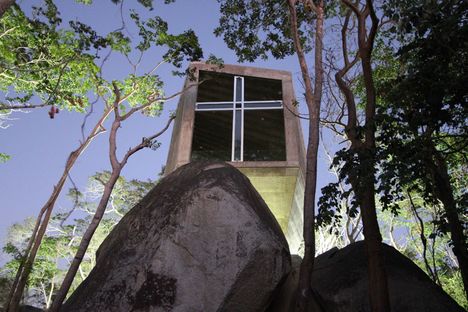 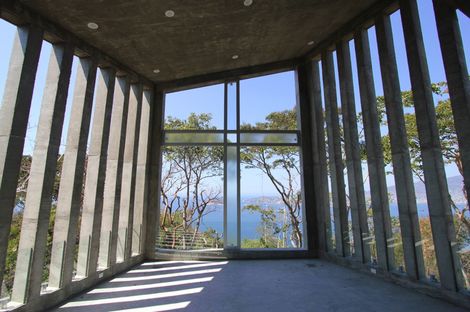 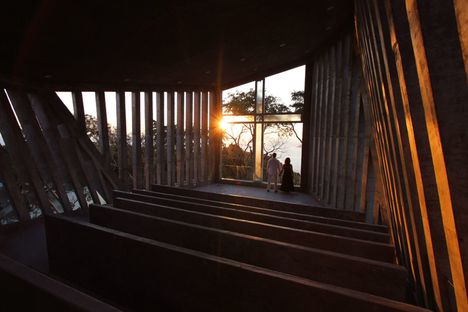 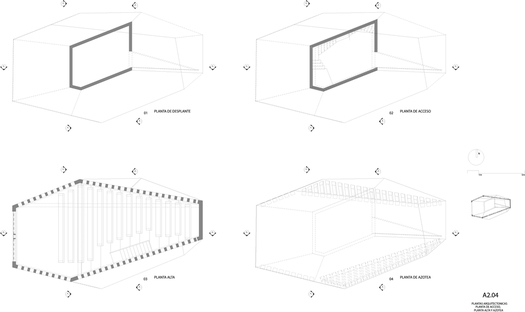 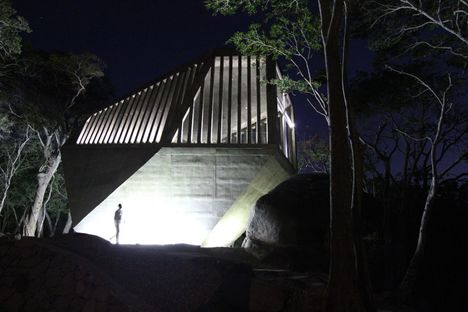 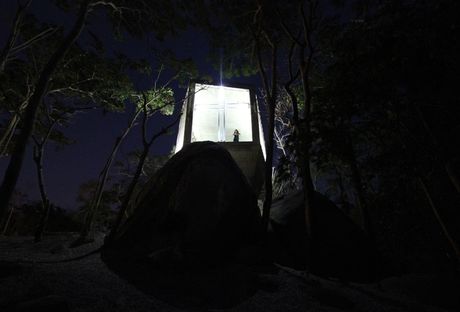 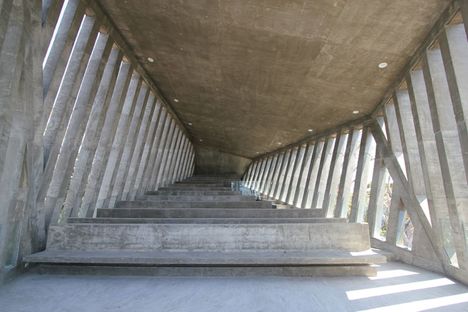 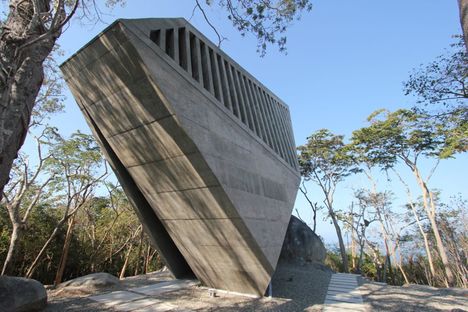 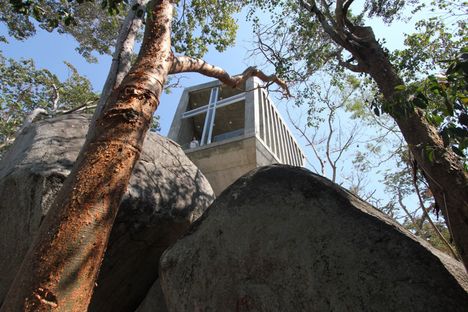 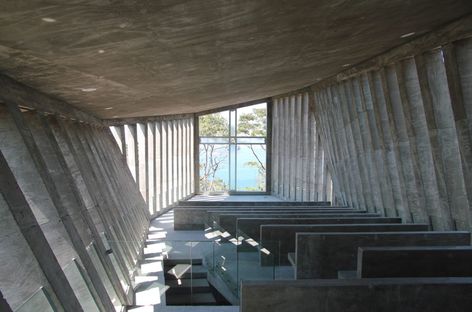 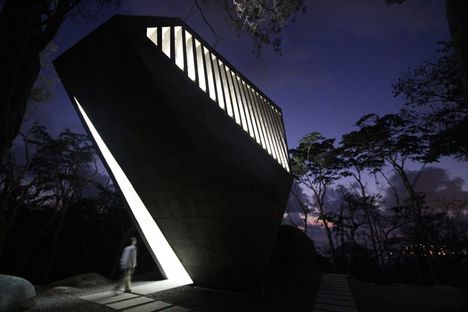 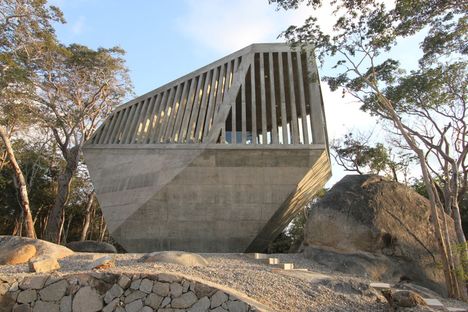 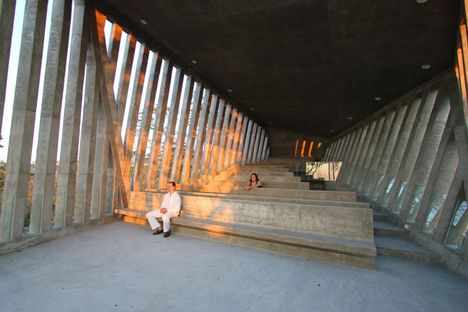 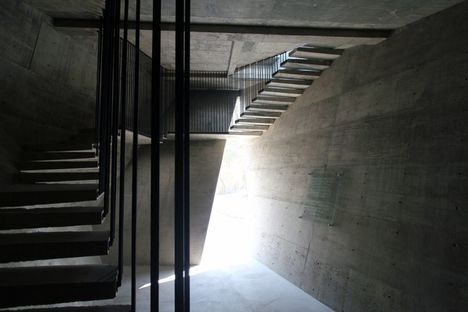 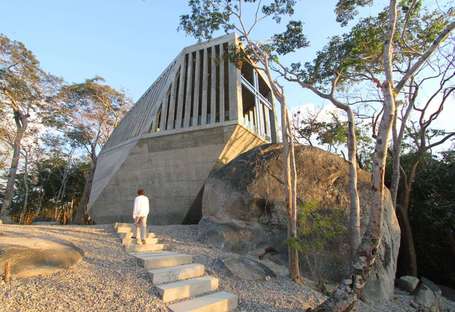 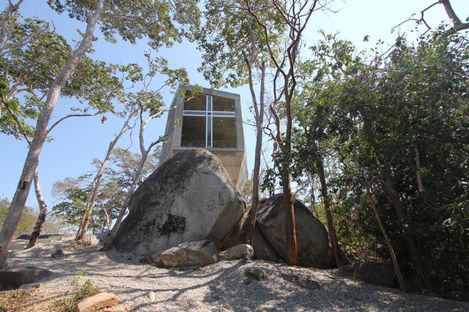 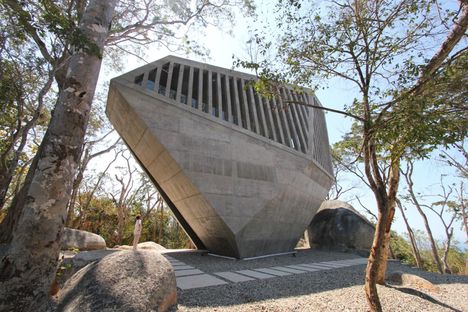