A secluded retreat in a bustling city, is how Chinese designer Wanmu Shazi describes his interior design project for T.T.Pilates, a centre for professional practitioners of pilates, an introspective form of exercise. Despite its location in the bustling centre of Xiamen, the studio is an oasis of tranquillity, a calm place in which organic shapes and warm materials create a rarefied, serene atmosphere. 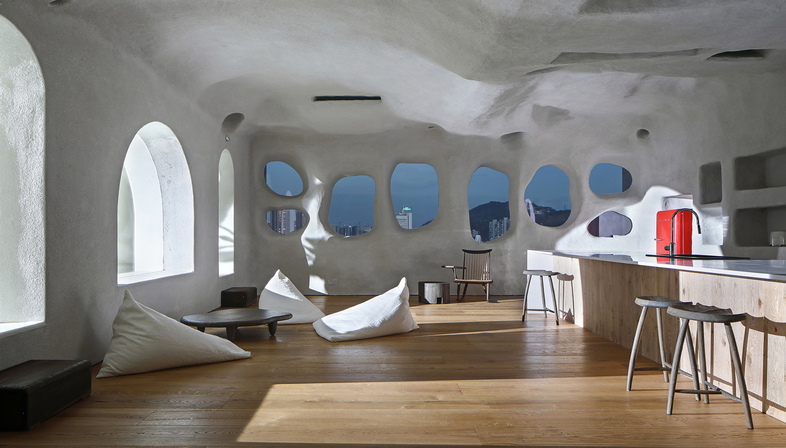 How to create a place outside of its context, outside of its time, to allow people to get away from the frantic pace of city life and learn about the discipline of pilates? This introspective form of exercise helps people get to know their bodies better, in order to improve their posture and self-awareness.
Chinese designer Wanmu Shazi has proven this is possible, even in a 29-storey tower block such as Xin Jing Centre in Xiamen, a metropolis with a population of more than 5 million on China’s southeast coast. On the basis of the idea that there is little difference between “hiding in wild nature or hiding in the city”, the designer creates a space measuring more than 730 square metres which amazes us with its natural feel despite the absence of plants.
Visitors arrive at the pilates studio via the classic route through the foyer of the skyscraper to the lift. But as soon as the elevator bell rings and the door opens, they enter a parallel universe of soft colours and rough natural textures. At the entrance, they sit on wooden seats casually arranged around the room to take off their shoes, enjoying a sensory experience right from the start.
What is most striking about T.T. Pilates studio is the fact that the design does not adopt a solution of complete isolation from the world “outside” to resolve the "contradiction" between the bustling city outside and the need for a calm, immersive space in which to exercise. Wanmu Shazi’s design gestures are delicate, replacing the traditional steel frames and French windows of office towers with "openings" of different sizes distributed on the basis of a precise design. In the teaching area, which demands tranquillity and total immersion, the windows are raised and reduced in size to conceal the city skyline, leaving only the sun and the sky in view, while the windows in the spaces for resting and socialising are bigger to bring in the beautiful city skyline and neon lighting, allowing students to relax and slowly reconnect with the world after exercising in this tranquil space.
In a note for the press, Wanmu Shazi explains the philosophy behind the interior design of the gym based on the idea of “qi” energy: "Many people said the space looks like a cave. But actually at the beginning of the design, [no] particular style and form popped in my mind. Instead, I just hoped to create a pure space that reveals a natural, austere, immersive and serene vibe. Once pilates learners walk into the space, they can immediately calm down and relax the body. I hope to endow the space with 'qi'. In turn, the space is born by ‘qi’”.
The result is a calm space in a bustling, fast-paced city, a space offering an experience made precious by nature, in its organic, primordial form. For, as we can see, anything is possible, even in a skyscraper! 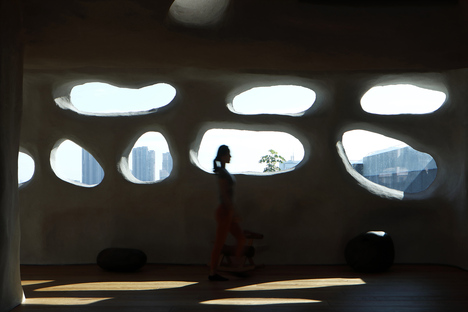 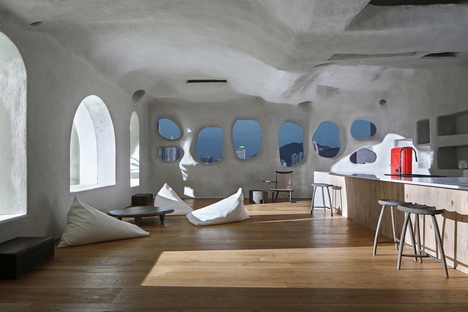 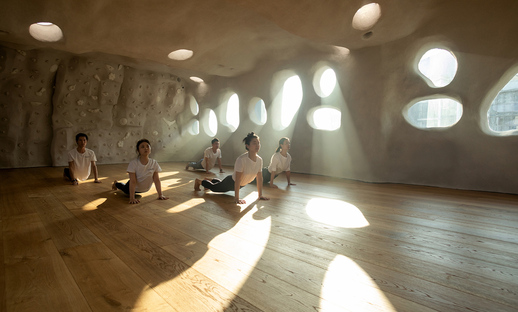 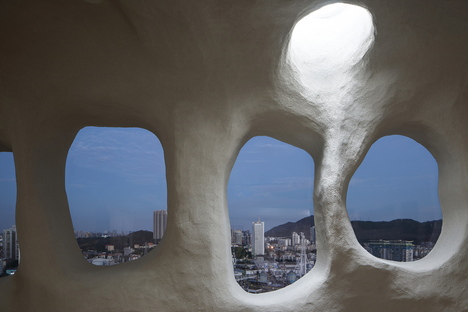 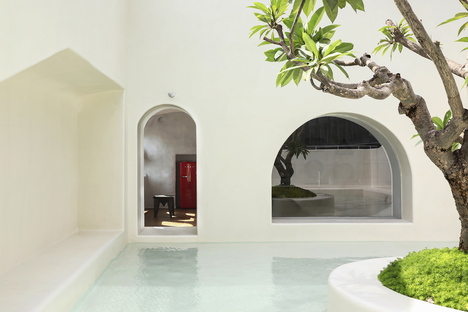 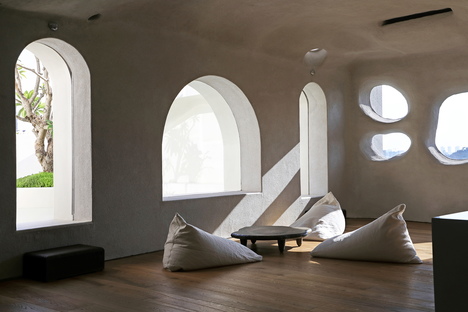 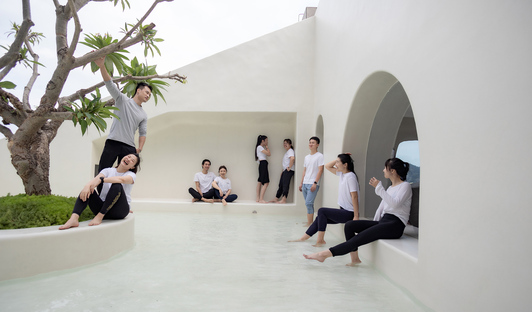 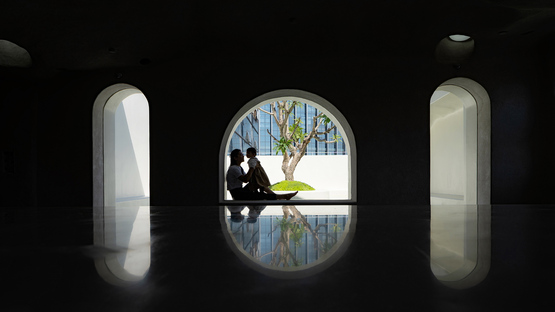 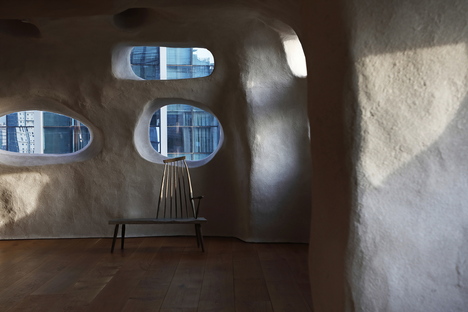 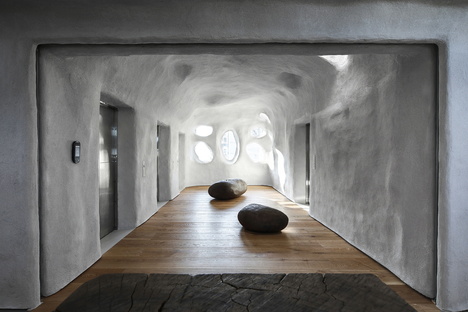 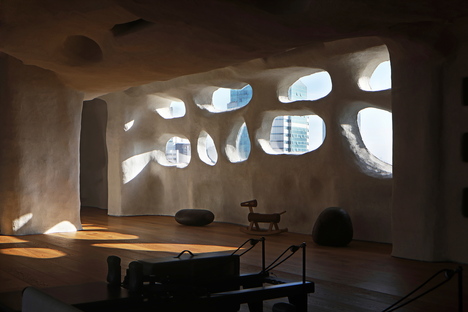 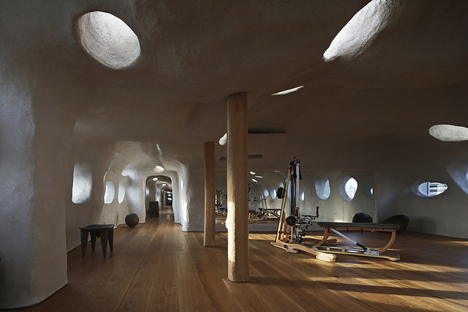 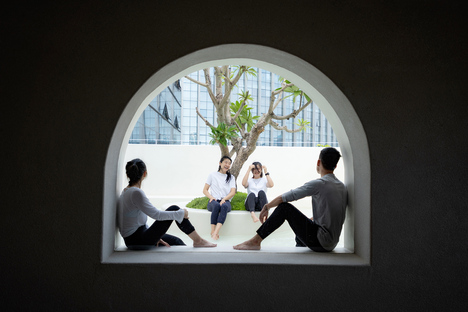 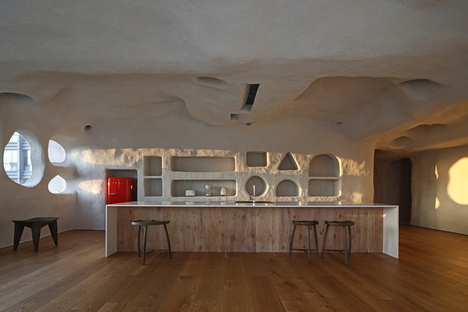 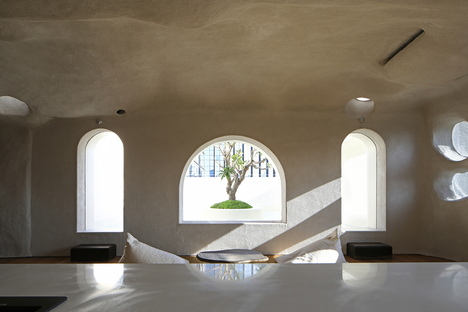 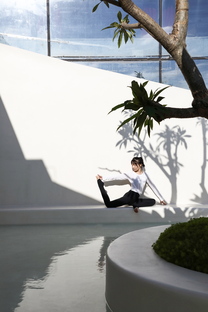