A house by Josep Ferrando Architects in Sant Cugat

The Catalan architect Josep Ferrando resolves the complex urban conditions of the context and location of the house with a project by crafting a brand new house in between two party walls of different heights. Site-specific is a buzzword right now, not just because of the art installations that respond to the specific characteristics of a given place, as we saw with LeuWebb Projects in Canada (see link).
And if you Google “site-specific architecture” - architecture which is of its time and of its place - you’ll get more than 36,500 Ghits. Site-specific architecture is designed to respond to both its physical context, and the metaphysical context within which it has been conceived and executed. The physical context includes its location, local materials, planning framework, building codes, etc., whilst the metaphysical context includes the client’s aspirations, community values, and architects’ ideas about the building type, client, location, building use, etc. In this respect, the house designed by Catalan architect Josep Ferrando in Sant Cugat, a picturesque town half an hour from downtown Barcelona full of historical heritage, is a unique example of the term.
The starting point for this project was to create a brand new home between the party walls of a row house in the centre of Sant Cugat, classified as a cultural heritage, which meant the building’s street facade and roof had to be preserved. Not only that but the residence had to fit into a gap measuring less than five metres wide, in response to the site’s complex topography between two streets of different heights.
Far from being limited by the constraints of the context and the project, Josep Ferrando decided to solve the complexity of the task by using the shape of the volume as his starting point. He completely gutted the existing building and dropped a new house made from concrete blocks into the shell. This made the party walls with the neighbouring houses thicker and he used the separating wall on one side for a system of staircases and on the other as an enclosure for storage and technical installations. The gap between these two service spaces is the living area and the heart of the house.
In the interior of the concrete house, L-shaped metal profiles sustain wooden panels which adapt to the topography and the openings of the existing facade. Due to a drop in ground level across the site, the living room is sunk below ground at the front but sits slightly above a garden at the back. An atrium area with the living room provides an additional source of daylight for the kitchen and dining area above. Three shed-like volumes - bathroom, bedroom and study - on the upper storeys are closed off from the atrium, and lead over to a balcony, the main bedroom and a roof terrace. Ferrando has organised the interior space into a fragmented sequence, ensuring that it both meets the needs of the occupants and conveys a warm, friendly atmosphere at the same time. He has adopted a unique construction approach throughout the house as if he were carving a block of wood, shaped through light, void and interior and exterior images. A perfect example of site-specific architecture. 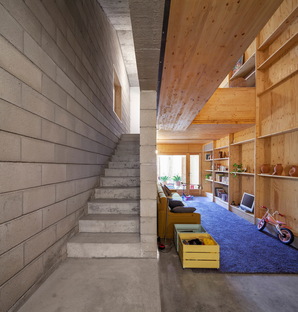 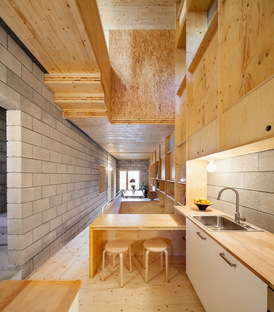 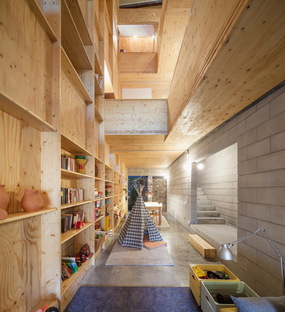 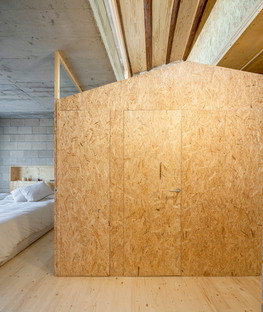 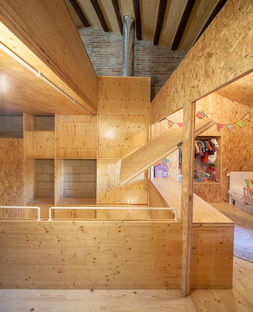 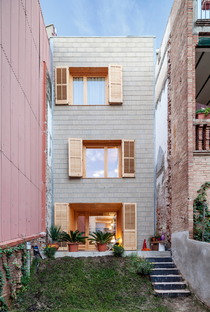 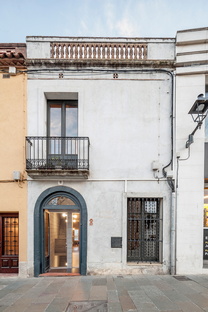 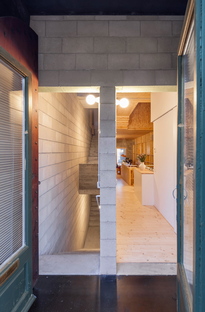 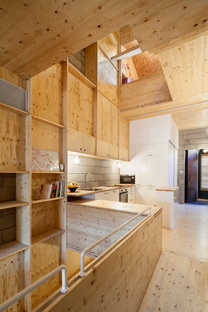 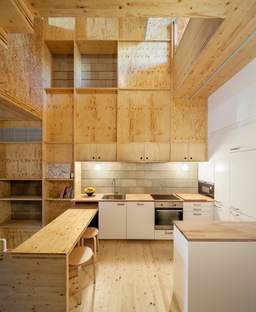 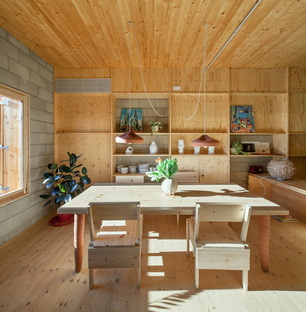 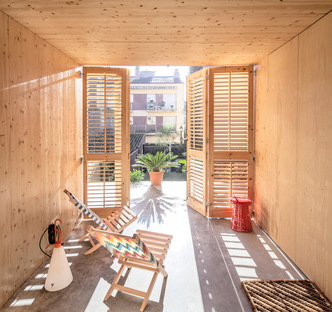