As part of the International Festival of Urban Art Asalto in Zaragoza, Spain, the Spanish architects from ENORME Studio have created new street furniture centred on a forgotten picnic table in a public space. 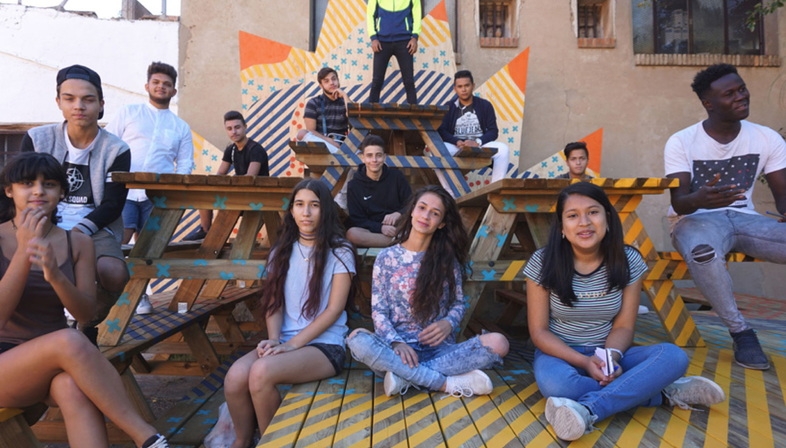 As part of the International Festival of Urban Art Asalto in Zaragoza, Spain, the Spanish architects from ENORME Studio have created new street furniture centred on a forgotten picnic table in a public space.


For many years engaged in improving the quality of life in urban contexts thanks to their eye-catching, sustainable operations, the architects from Madrid-based studio ENORME, also known to our readers as winners of the 2015 Next Landmark international contest, have participated in this year’s Asalto, the International Festival of Urban Art. For several months each year since 2005, this festival has been bringing avant-garde art, participative works and eye-catching proposals by individual artists and national and international groups to the streets in the historical centre of Saragozza. Basically, the whole city is turned into a massive art workshop that accommodates the whole creative process and its execution. Asalto has turned into a festival that seeks to explore, reveal and rediscover the urban space through artistic activities, actions and urban experiences that turn the public space into a participatory, colourful, friendly and culturally open and active setting.
Which is the backdrop for the work called PICNICTOPIA by ENORME Studio completed with the IES María Moliner secondary school. They took a common but solitary picnic table lost in a public space and used it as the focal point for a reflection on how to revisit this piece of furniture both in terms of its primary function and for hundreds of different configurations, from a ping-pong table to impromptu stage.
The creatives from ENORME Studio took a total of 17 of these picnic tables with incorporated benches, assisted by students and teachers from the María Moliner high school and by designers and architects from the city to build a multifunctional piece of furniture to extend the urban experience of the schoolyard. On the last day, this sculpture was painted by the students with a powerful, bold graphic that underpins the idea of a recently landed supernova in the school’s public space.
With PICNICTOPIA, an urban utopia crafted from a basic piece of street furniture, the architects from ENORME Studio showed once again that the real limit to urban planning that focuses on the needs of the population and, as a result, on a better quality of life, is not so much the budget as a lack of imagination.
A project that reflects the philosophy of Festival Asalto that looks at urban art as a game where the whole gamut of the population, including school students are invited to participate. 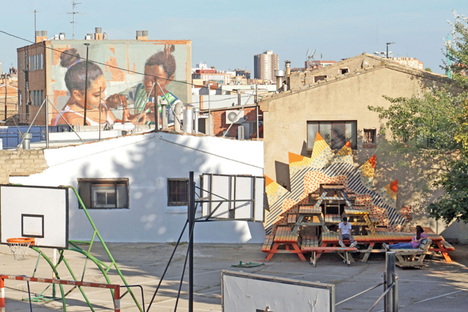 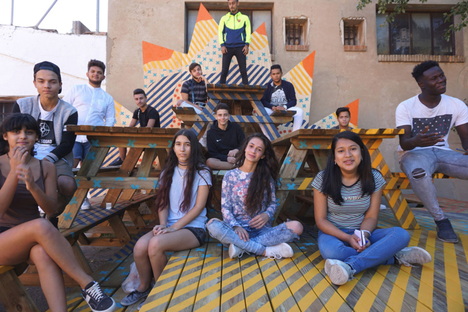 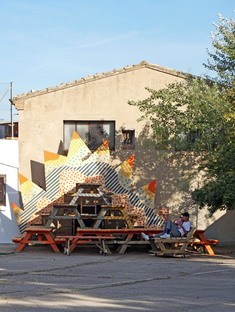 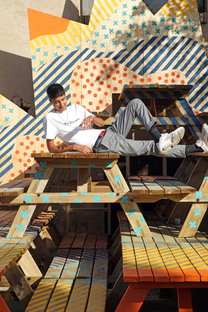 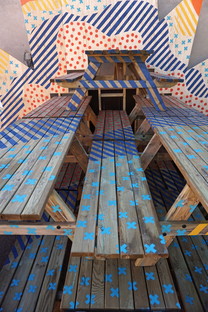 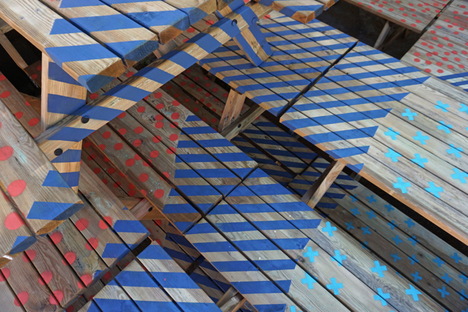