British artist Morag Myerscough, whose colourful works greet visitors to the Design Museum in London, has designed a series of permanent artworks for building 1FA in Broadgate London, renovated by AHMM architects. 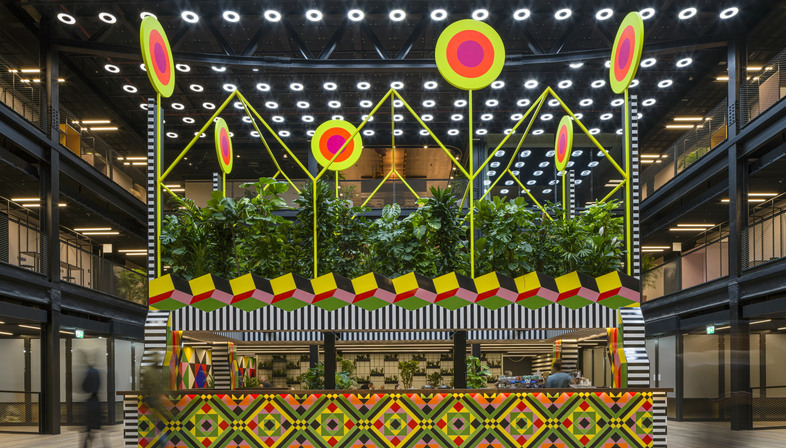 Broadgate is the largest pedestrianised neighbourhood in Central London and its joint owners, British Land and GIC are redeveloping the over 455,000-square-metre area as a mixed-use community, helped in this by its strategic position adjacent to the busy transport hub of Liverpool Street station and surrounded by Shoreditch, Spitalfields, Old Street and London City.
The first building to be completed is Estate 1 Finsbury Avenue Square (1FA), Broadgate, originally designed in the 1980s by Arup Associates and now Grade II listed ("of special interest, warranting every effort to preserve it”). The refurbishment of 1FA by architects Allford Hall Monaghan Morris (AHMM) for British Land has been enhanced on the ground floor of the public space with a series of permanent works by British artist Morag Myerscough,  providing a visual welcome in the artist’s signature style. Myerscough is known to our readers for her permanent work in the Design Museum, London and for other temporary installations.
The striking centrepiece is the biophilic installation ‘Atoll’ - a colourful permanent 7.5m high structural intervention housing a cafe. A real interior landmark that transposes the ambition to re-establish a primary east-west public route through the building, helping to activate the ground floor while creating a new connection between Wilson Street and Finsbury Avenue Square on the Broadgate campus, making a formerly corporate space accessible to all.
Morag Myerscough’s drew inspiration for Atoll from her own ties with London, where she has lived her whole life, and from the biophilia hypothesis, which suggests that humans possess an innate tendency to seek connections with nature. “My fascination with how the Victorians made public parks for city workers to get fresh air at weekends (as a child I lived very close to Finsbury Park) has inspired me to bring the park to the workplace at 1FA”, explains the artist.
The lower level is occupied by a café, run by Butterscotch Bakery, whilst the upper level of the Atoll incorporates the outline of three London terraced houses, surrounded by dense planting and completed with six neon suns signifying joy and energy.  The houses make reference to Broadgate’s residential history, introducing a sense of intimacy and domesticity to the space.  At the public entry lobbies on the eastern and western sides of 1FA, Myerscough reprised a concept, which she also successfully executed in her scheme for the Design Museum's ‘Designer Maker User’ permanent exhibition: rotating Tri-wall advertising boards, animating three patterns with a 3D effect to give a warm welcome to visitors. The semi-open nature of 1FA also means that anyone on the mezzanine levels can look down at the verdant planting within the Atoll structure.  Myerscough’s installation spreads through the whole of the atrium with large-scale patterned walls and an expansive seating area with hand-made and hand-painted overstuffed velvet cushioned seating, tables, benches and planters, designed and made by Myerscough and Luke Morgan at their local Hoxton studio.
Public artworks have been part of the DNA of Broadgate since its inception. Broadgate’s long-standing commitment to art and design is evident in its carefully curated collection. Prominent permanent works include Richard Serra’s ‘Fulcrum’, Jim Dine’s ‘East End Venus’, Fernando Botero’s ‘Broadgate Venus’ and David Batchelor’s ‘Chromarama’.  These artworks enliven public spaces and extend into the lobbies of buildings and across the neighbourhood.  Visitors can take in the works via the Art Trail or simply explore London’s most diverse and welcoming art gallery which includes the newest additions at 1FA by Myerscough, Atoll. 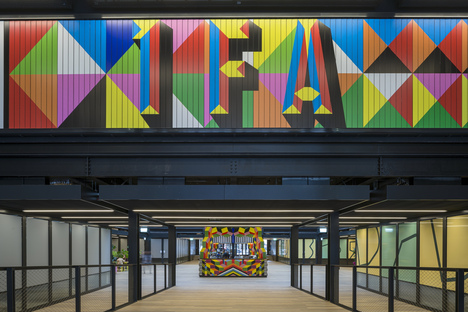 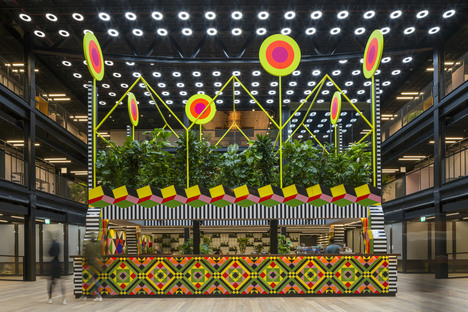 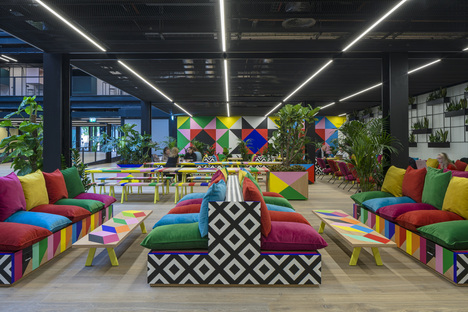 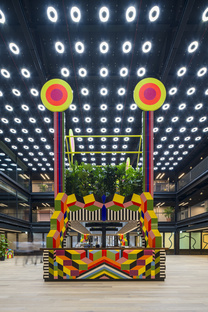 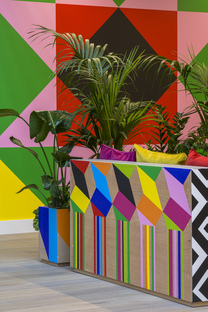