The Kiwanis Methow Park Kiosko is a facility that serves as a community hub for a park in Wenatchee, Washington. Commissioned by the Trust for Public Land organisation and the city of Wenatchee, the project designed by the Fivedot architectural firm with the Site Workshop landscape architects studio, has become a point of reference for the local community. 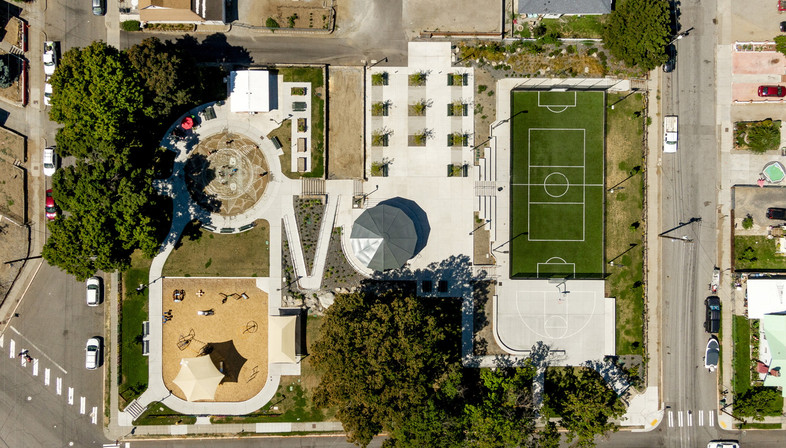 Kiwanis Methow Park is a park of just over 5,000 square metres, purchased by the city of Wenatchee as far back as 1933. The Park consists of an equipped recreation area which features a seasonal swimming pool as well as a skate area and a basketball court. In other words a place that offers various opportunities for recreation to the population of the city of 35,000 inhabitants in Chelan County, central Washington, at the foot of the Cascade Range, just below the confluence of the Wenatchee and Columbia rivers.
Kiwanis Methow Park is one of the few public green spaces in South Wenatchee, a majority Latino neighbourhood whose needs had historically not been a priority. The area was in need of some work to fix the old, run down football field, the netless basketball hoops and the rather unappealing chain-link fence, so much so that many residents did not consider Kiwanis Methow Park a place where it was safe for their children to play.
When The Trust for Public Land – a non-profit organisation founded in 1972 with the conviction that all people need access to nature and the outdoors, close to home, in the cities and in the communities where they live, as a matter of health, equity and justice – learned of the need for a high quality park in South Wenatchee, they first went to talk to people in the community to understand what a high quality park meant to them. More than 500 South Wenatchee residents participated in the process to make sure the park reflected the community's priorities: family gatherings, cultural festivals and community events.
Building on the deep community involvement initiated by TPL, the Fivedot architecture firm, based in Seattle, collaborated with the Site Workshop landscape architects studio specialised in community-based design.
During the meetings with the predominantly Latino local community, it immediately became clear that the park needed a physical place to host gatherings and celebrations. The decision to build a kiosko echoes the traditional central gathering places typical to the cities of the first and second generation Mexican families who reside in South Wenatchee. The deep overhangs of the small structure measuring just 81 square metres shade casual gatherings during the week, while the graceful steel arches frame traditional mariachi performances in the evenings: the kiosko thus becomes a real aggregator for members of the Latino community.
The murals that adorn the concrete benches were created by artist Claire Barnett with Seattle Mosaic Arts using drawings from the artist-led workshops, where community members created the various plates that have been installed. These creative interventions were led and coordinated by Wenatchee artist Terry Valdez.
Thanks to the Trust for Public Land's work with the local population, together with the Fivedot and Site Workshop studios, Kiwanis Methow Park has regained its central role in Wenatchee's urban life and its perception has profoundly changed. An effective example of the great power of true participatory planning. 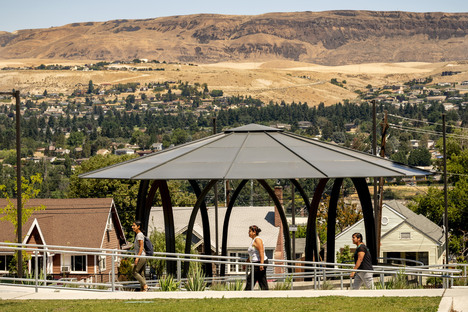 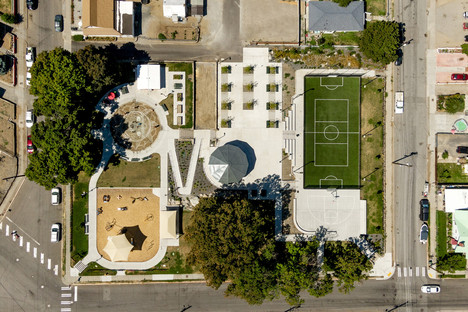 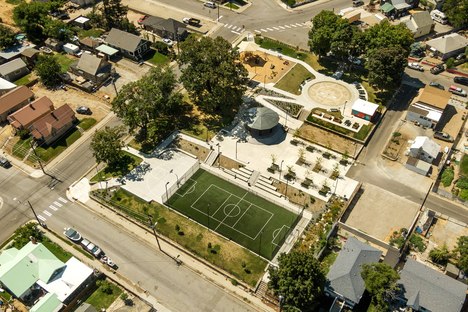 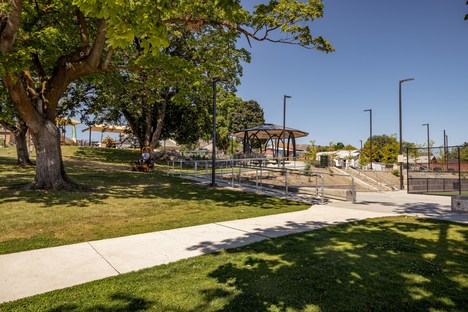 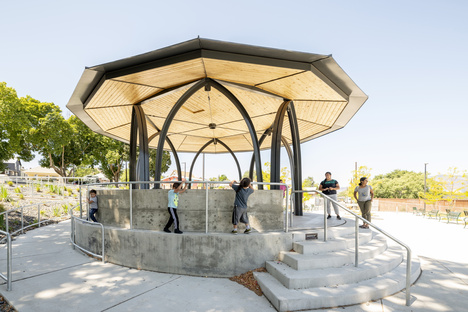 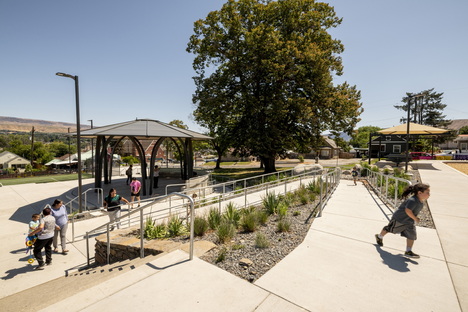 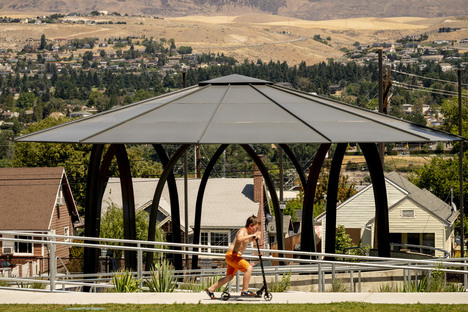