The Mechanized River Valley Access by DIALOG connects downtown Edmonton, Canada with its spectacular Saskatchewan river valley. The project is one of the recipients of the 2020 National Urban Design Award, organized by the Royal Architectural Institute of Canada (RAIC), the Canadian Institute of Planners (CIP) and the Canadian Society of Landscape Architects (CLSA). 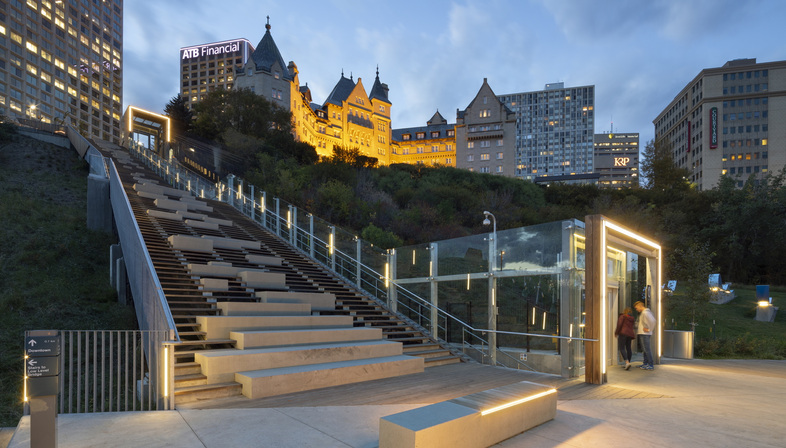 The not-very-romantic name of the project - Mechanized River Valley Access - belies the full range of elements, including a funicular, which is part of a broader process to connect the Saskatchewan river valley to downtown Edmonton, capital of the Canadian state of Alberta.
The goal of the initiative supported by the River Valley Alliance is to increase equitable access to the river valley for all citizens and visitors in Edmonton, making it more accessible to people of all ages and abilities in a selective approach. Since 2012, several options have been discussed with City Council to determine how to best implement the connection of the downtown to the North Saskatchewan River valley. Because the vast elevation difference and steep slopes of Edmonton’s river valley are part of its exceptional beauty but make access difficult for users with mobility challenges. The proposal decided by DIALOG architecture studio includes a funicular, staircase, promenade and park, pedestrian bridge, lookout, and elevator, allowing people to overcome the steep riverbank slope. This is more than a major infrastructure and accessibility project, it’s a remarkable urban space defined by the best kind of placemaking that, since its completion, has captured the hearts of the people.
DIALOG has created a top promontory that provides panoramic views of the valley and offers places to sit and take in the view or wait for the funicular. The city council preferred this mechanized system because it has a small station footprint, is generally very safe and enables groups of wheelchairs, cyclists, pedestrians, families with small children and other people with mobility issues to safely cross the valley. Parallel to the funicular, DIALOG added a broad staircase with ample seating—a place to actively traverse the slope or take a relaxing break.
Once down in the valley, a promenade presents dynamic public art incorporated into benches to evoke river waves and curving valley contours.
From the promenade, a gently sloping pedestrian bridge carries people over the roadway to the Frederick G. Todd Lookout rising above the forest, providing an immersive experience that you can’t get anywhere else in Edmonton. A glass elevator acts as both a structural support for the pedestrian bridge and a direct connection to the trails below, so they are fully accessible for everyone.
The system designed by DIALOG was a recipient of the prestigious Canadian National Urban Design Award - 2020, in the Civic Design Projects category. According to the jury, it is “A beautifully-conceived ensemble of built structures, open spaces, and public art that successfully connects Edmonton’s downtown to the river valley. The juxtaposition of landscape attributes—in particular, its topographical and visual qualities—and the architectural details and materiality of the downtown milieu are compelling. How the project also integrates various existing infrastructures, such as the pedestrian/cycling paths and the vehicular roadways, into a cohesive threshold experience is remarkable.” And it is all to experience the urban environment of Edmonton at its best. If you like, you can quickly move from downtown to the majestic nature and beauty of the Saskatchewan. 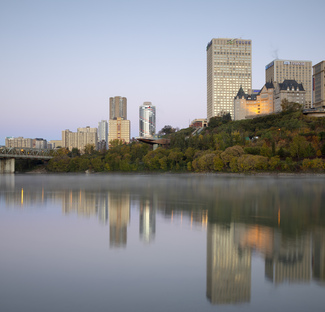 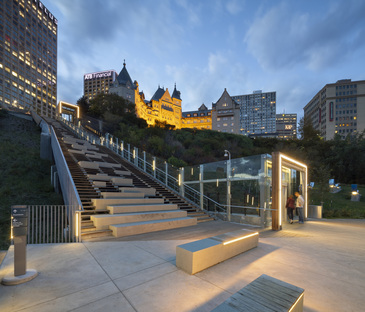 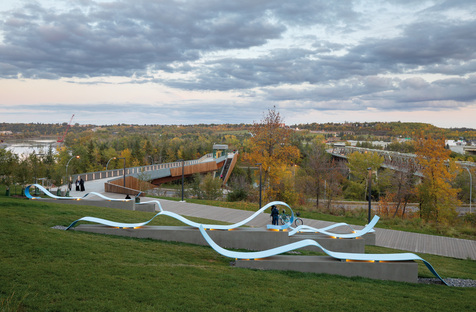 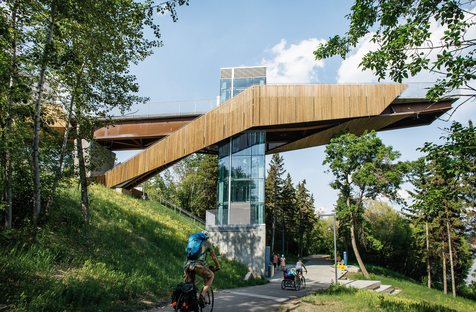 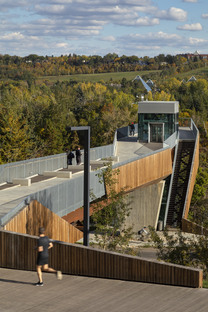 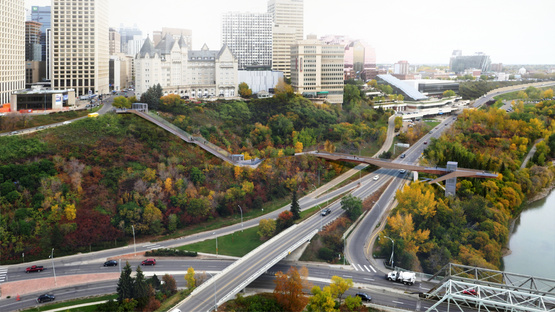