Markthal in Rotterdam with MVRDV

Markthal by MVRDV in the city centre of Rotterdam has been a major attraction of the Dutch city since it opened in 2014, and after seeing it “live” we can confirm the great appeal of this landmark architecture.

Markthal by MVRDV in the city centre of Rotterdam has been a major attraction of the Dutch city since it opened in 2014, and after seeing it “live” we can confirm the great appeal of this landmark architecture. 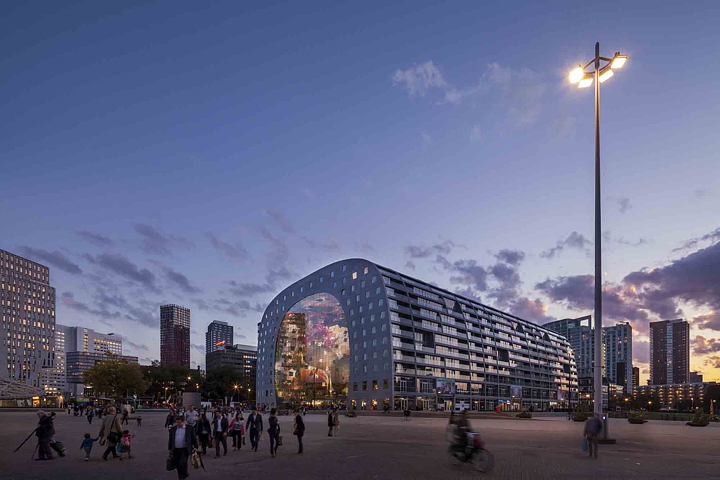 “Rotterdam celebrates the city”: Rotterdam is celebrating 75 years of Reconstruction after World War II. This anniversary is a great excuse to spend a few days in one of Europe's most architecturally interesting cities.

On our tour of the city - by bike, of course - we saw two examples of this urban transformation, which began after the war and that is still continuing now with great intensity. In addition to visiting KleinpolderpleinPARK (we will present the coming week) with Andre Dekker from Observatorium, we met Jan Knikker, partner of the firm MVRDV, who accompanied us on a tour of the Markthal and to visit the new offices of MVRDV. On 20 June, they moved into part of a historical building from the 1950s designed by renowned Dutch architect Hugh Maaskant, and refurbished by MVRDV themselves, more about that in the near future.

One of the landmarks of the new Rotterdam, Markthal fits in really well on the Hoogstraat and the market square of the Laurens district, despite its massive size - it has been compared to a hangar, although we saw it more as one of those beautiful late 19th century railway stations. It's natural to go inside, the square pavement draws visitors into the large market hall in the shape of a large upside-down U with some 100 stands and an extensive culinary offer at affordable prices. The ground floor is home to eateries and shops and the 10 upper floors are filled with some 228 apartments, including 10 penthouses. These are true split-level gems, with views of both the internal market through the tempered glass skylights fitted in the floor, and of the city from the large scenic terrace.

The basement levels of the Markthal have parking spaces for 1200 cars, with a guided system for drivers to find a parking spot within 2 minutes, and prices that are adjusted to the sustainability of the car - so electric or hybrid cars get discounts. You then go up to the actual market hall on the escalator called “Time stairs” designed by Kossman.dejong that give you an overview of the history of this place. There is no air-conditioning inside the market hall, it uses natural ventilation; the only concession to climate control is the floor heating that prevents the formation of ice in winter.

An architectural landmark it is, but it doesn't have that star-vibe even with all the people admiring and photographing the eye-catching interior facade based on a countryside theme and made using 11,000 square metres of aluminium panels printed with automotive paint to guarantee it will last for 30 years. Hollywood's Pixar was also involved in its making. In truth, a visit to the Markthal by MVRDV is a bit like stepping into a sci-fi journey, in line with a city full of surprises that we will discuss again this summer! 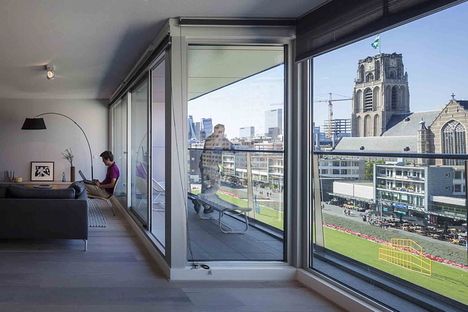