Layering Courtyard in Beijing by ARCHSTUDIO

With its project called “Layering Yard”, ARCHSTUDIO has reinvented a traditional industrial building and quadrangle near Beijing’s historic Qianmen gate. 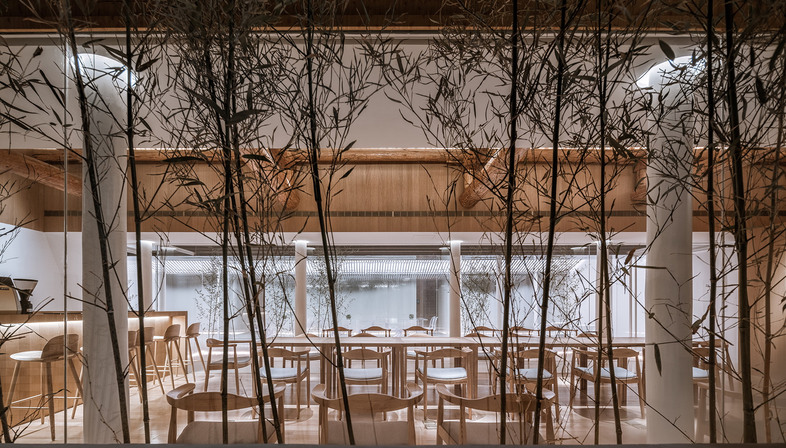 With its project called “Layering Yard”, ARCHSTUDIO has reinvented a traditional industrial building and quadrangle near Beijing’s historic Qianmen gate. The work of the architects revolves around the courtyard, characteristic of the Chinese Hutongs, a type of traditional building that is currently going through a renaissance.


The Chinese architects from ARCHSTUDIO have already worked on recovering existing constructions in the past, making them over for new uses. Their work is distinguished by highly elegant solutions that are in line with contemporary needs but they never lose sight of the importance of preserving architectural heritage as a testimony of the past. This trend is on the rise in China, like elsewhere, not least because of the gentrification of city centres with a demand for living spaces of a certain quality.
Layering Courtyard by Archstudio concerns a traditional industrial building and quadrangle whose features are characteristic of the houses in China’s Republican era: here there is a row of arched doors and windows on the south along the street, and a two-storey building behind it facing north. It has already been through a number of reincarnations but now Han Wenqiang and Huang Tao, the architects from Archstudio have given it a complete makeover to improve the intrinsic qualities of the architecture and to attract the urban population to this multipurpose complex reminiscent of other typical scenarios involving Hutongs in China’s capital.
In the first place, the architects knocked down two side roofs that delimited the courtyard, in order to increase the available space. They dropped in a new building with a sloping roof here, and its position has created two parallel courtyards. These courtyards mean all the interiors are filled with natural light and have direct visual and physical contact with the bamboo decorating the yard.
The sequence of environments broken up by the courtyards is layered to move from the most public areas to the most private. The first house is the most public, with a reception space, dining room, bar, kitchen, storage space, and an office. Here, the original wooden beams and columns have been preserved as much as possible, while two new wooden service booths divide the space. An intelligent solution because not only are the different-sized spaces divided off, it also recreates, at least in part, the typical feel of the Chinese Hutongs. The middle building has been turned into a flexible multifunctional space, which can be interwoven with other activities - an extension of the restaurant, or a separate exhibition room, or integrated into the guest apartments beyond as a rest area.
The architects strived to keep a harmonious relationship between the new addition and the old building with a sloping roof on both sides, giving it scale, light and distance. The interiors of the centre building have been constructed around a linear water garden, using mostly translucent materials and furniture to lighten its physical presence. It ends up with a light atmosphere, sort of floating in the middle, much different from the ambience of the original building. This skilful play of old and new is where all the design power of Layering Courtyard comes forth. Archstudio isn’t afraid of cross-contamination because these lead to the creation of a place that is rooted in history and in its context, reminiscent of the past but interpreting tradition with a totally modern language. At the same time, it doesn’t go with the current vogue of elevating nostalgia for the past to a hallowed status. 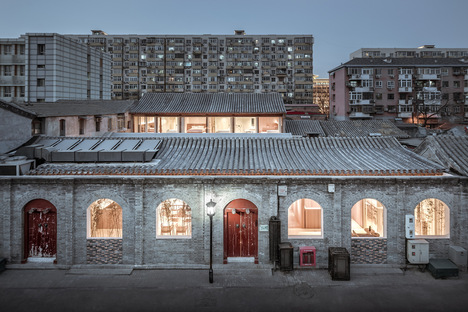 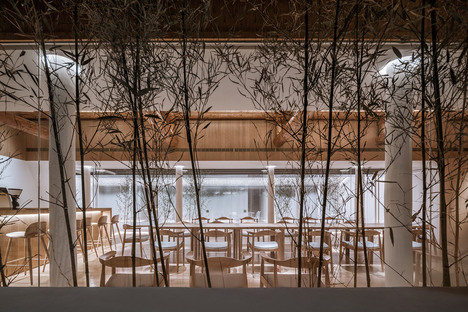 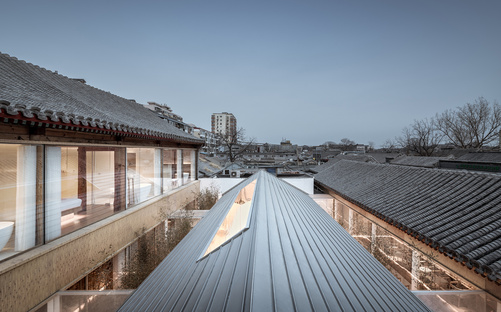 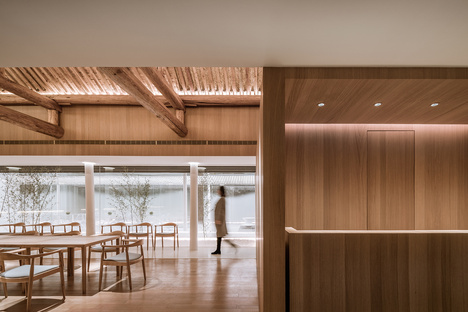 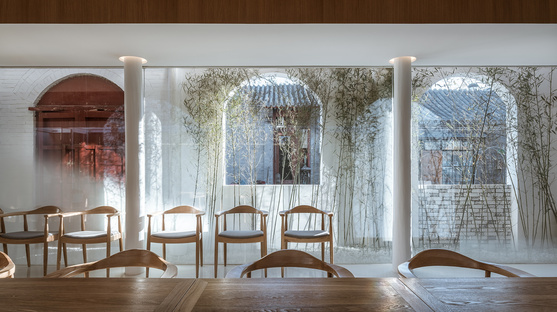 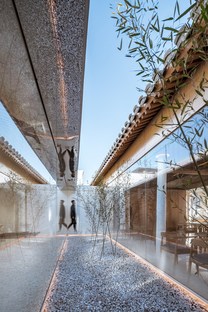 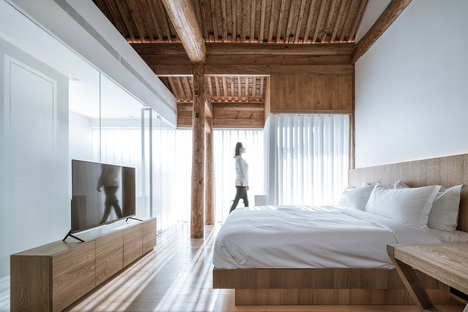