Parade is a travelling Dutch theatre festival that decided to expand its offer with the Parade Museum.

Parade is a travelling Dutch theatre festival that decided to expand its offer with the Parade Museum. Where there's a museum you need an exhibition, and Kossmann.dejong was commissioned to create this triumph of images and emotions.

Happiness, sadness, courage, battle and vitality are the keywords of the exhibition designed by creative studio Kossmann.dejong, commissioned by the Nederlands Fotomuseum Rotterdam (Dutch photography museum in Rotterdam) as curator of the new museum concept to be rolled out during Parade, the travelling Dutch theatre festival that kicked off from Rotterdam and will conclude in Amsterdam on 28 August. 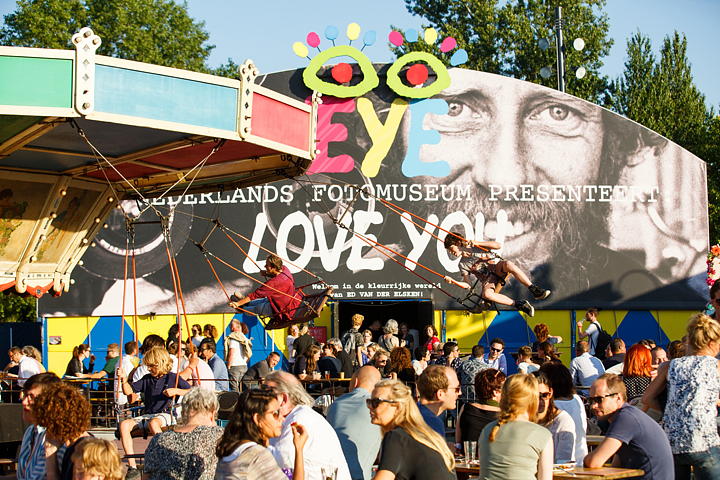 Parade Museum will also be travelling with the festival, aiming to share with visitors the core emotions that affect our lives, for good and for bad. The Nederlands Fotomuseum Rotterdam therefore asked Kossmann.dejong to create an exhibition based on the famous book “Eye Love You” by Dutch photographer Ed van der Elsken (1925-1990), one of the most influential photographers in the Netherlands. In the last thirty years of his work, Ed van der Elsken went from predominantly black and white photography to colour photography, and in 1977 he declared his love for people and for life in his book “Eye Love You”.

Kossmann.dejong came up with the concept and Tungsten Studio then created the multimedia contemporary slide show, so visitors can travel with Ed van der Elsken and look through his eyes to see how love, life and death are experienced all over the world.

The multimedia show is accompanied by the extensive restoration project of around 45,000 slides of Ed van der Elsken to be able to fully relive a piece of visual history, told by one of the grand masters of Dutch photography.