GROUP A, renovating the Oostlijn in Amsterdam

Architectural studio GROUP A has recently finished renovating the Oostlijn (East Line) of the Amsterdam Metro. 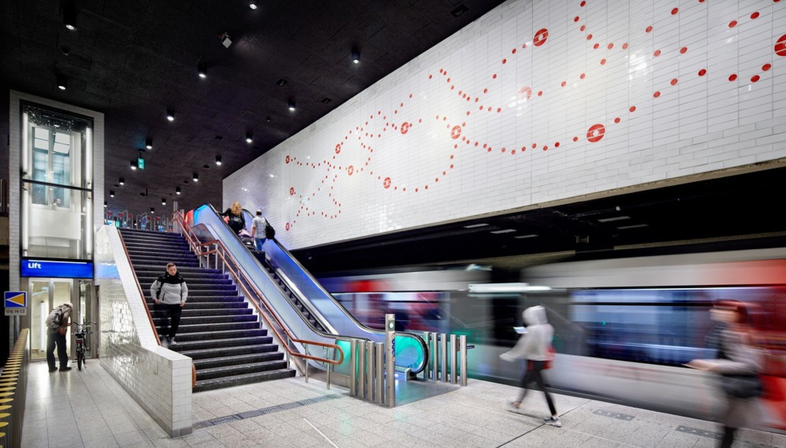 Architectural studio GROUP A has recently finished renovating the Oostlijn (East Line) of the Amsterdam Metro. The project includes 5 underground and 11 above ground stations. The work has taken almost 10 years and has injected new life and functionality into the metro line.


If you're heading to Amsterdam to celebrate the King’s Day this weekend, you'll be presented with a new, sustainable addition: the renovated Oostlijn metro line, which runs from the central station to Amsterdam Zuidoost, partially underground and partially above ground. It was built in the seventies in a signature brutalist style.
Over the years, with lots of changes made, the metro line and its stations had lost their clarity. Passengers constantly complained about the lack of safety with overly narrow and insufficiently ventilated escape routes. The metro operator also needed a complete restyling of the graphic design and signage in general, to bring together a coordinated image in keeping with the times and to set up the stations for future use.
GROUP A, a Dutch architecture, interior, urban and product design studio founded in 1996 and led by Adam Visser, Folkert van Hagen and Maarten van Bremen was commissioned to give the line a facelift. The architects developed a design vision that was based on boosting social security, comfort and identity. Their goal was to create a modern, functional metro system, which would be well-organised and enjoyable to use. The team proposed achieving this goal without destroying the metro line's brutalist DNA or - horror of horrors - demolishing it completely. They worked with what was there.
The 16 stations on the Oostlijn line are all different from each other, so the first thing GROUP A did was to develop a  generic design. This consisted of a set of general site unspecific design options, which included transparency, fundamental to make passengers feel safer. These design options also bring more daylight deep into the station halls, which allows for natural orientation. At the same time, the points of sale and the signage elements are based on a modular cluster design: easy to maintain and to accommodate future changes.
Then, the use of indirect lighting emphasises the spatial qualities of the original stations and their brutalist identity. Added to this is a strategic use of colour, intended for wayfinding and used solely to emphasise points in the space that require the passengers’ attention: entrances, ticket vending, information and vertical connections. GROUP A contrasted the original concrete surfaces with new materials like glass, hardwood and glazed tiles to showcase the interiors. In order to give the Oostlijn line its own Visual Identity and boost its image, the modular system of wall tiles was used to create an Oostlijn specific “alphabet”.
A huge task carried out on a limited budget and without interrupting daily commuter traffic. After almost ten years of hard work, the Oostlijn has once again become a functional and appealing element in Amsterdam's public transport system, ready for the next 30 years and certainly a plus for anyone travelling to Holland for King's Day on 27 April. Because on that day, anything goes – except using your car! 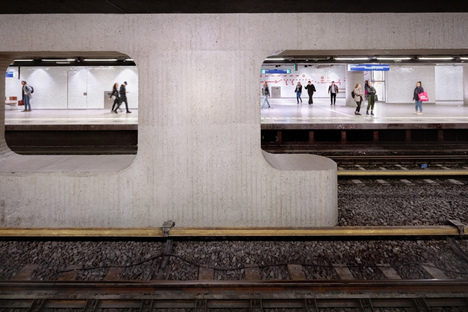 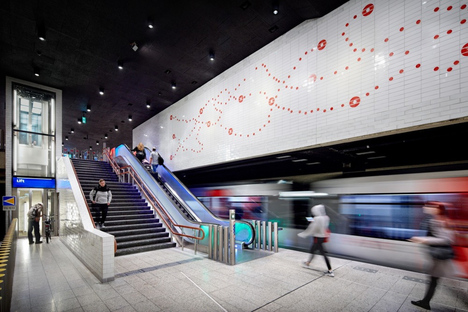 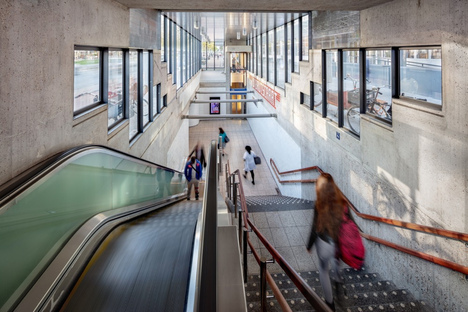 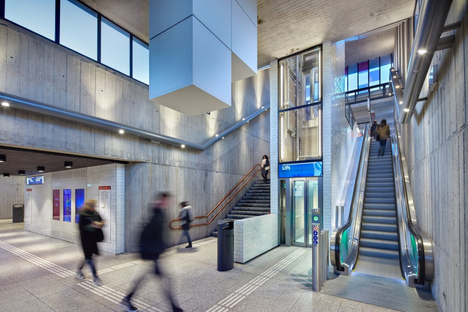 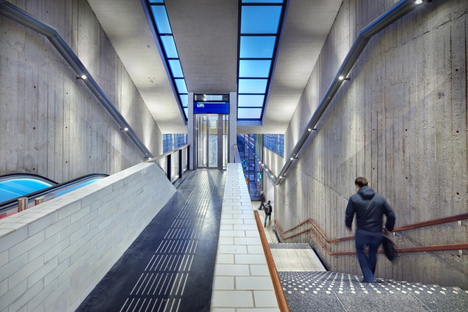 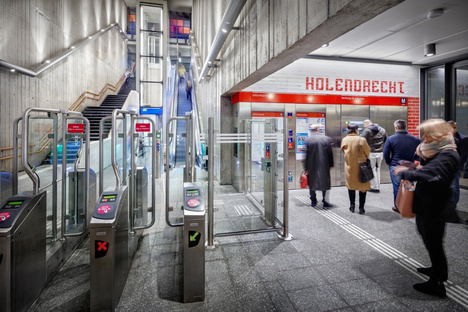 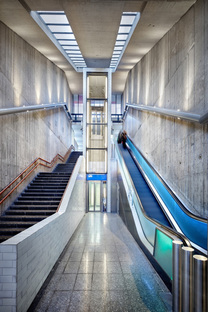 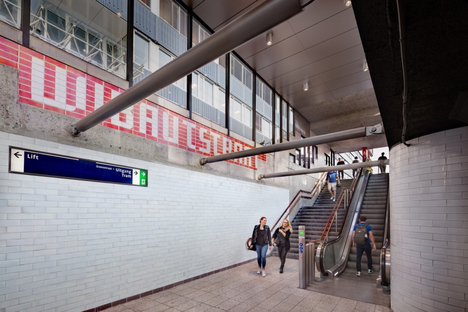 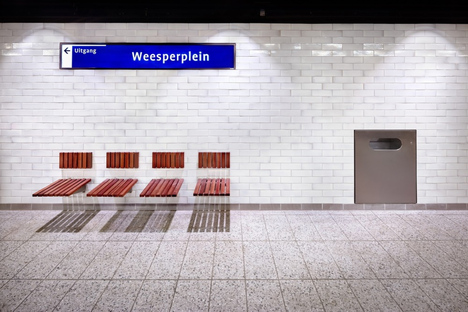 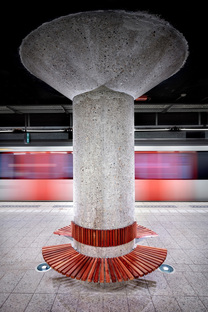 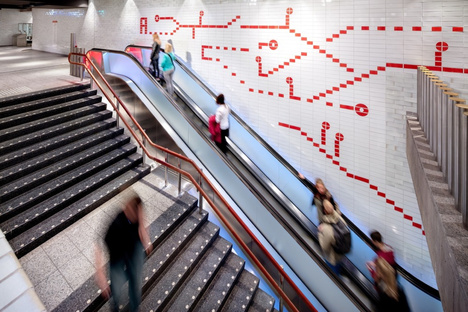 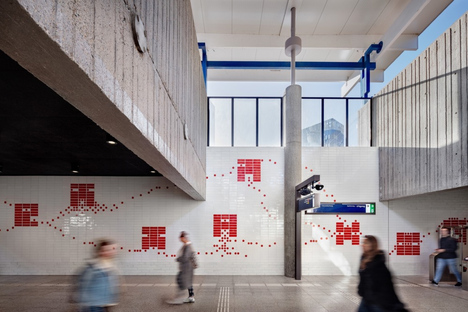 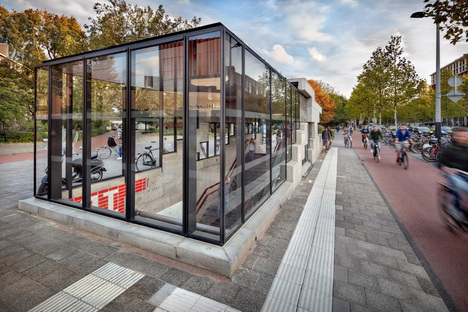 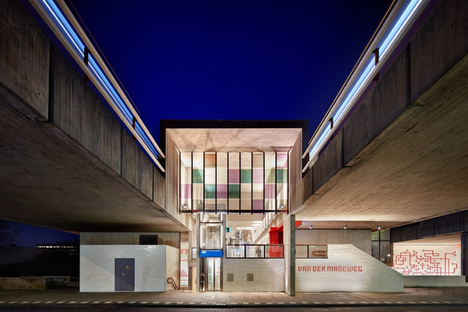