Turin’s Green Pea building by ACC Naturale Architettura Cristiana Catino and Negozio Blu Architetti (Ambrosini, Gatti, Grometto), who designed the first Eataly, is a symbolic building and the last piece fitting into the puzzle of redevelopment of the Carpano Lingotto former industrial zone as part of the initiative for regeneration of the southern part of the city of Turin. 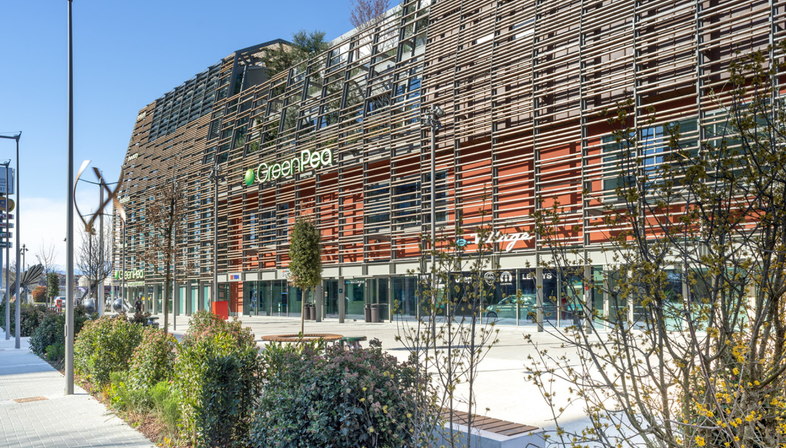 Green Pea in Turin’s Lingotto district is the world’s first Green Retail Park, extending over 15 thousand square metres with a focus on the environment. It is also an example of application of the dictates of sustainability, a project in which form, materials and content are perfectly compatible, and the true protagonists are sustainable materials, vegetation and natural light.
Commissioned by Eataly Real Estate, Green Pea is the last piece completing the puzzle of redevelopment of the former Carpano Lingotto industrial zone, a key project in the process of regeneration of the southern part of the city of Turin. The new building designed by ACC Naturale Architettura Cristiana Catino and Negozio Blu Architetti (Ambrosini, Gatti, Grometto), who designed the first Eataly, is a manifesto, constructed using new technologies and natural materials that use architecture to convey the idea of respect for the environment and harmony with nature. The organic volume has an unusual multi-faceted shape, rising through five floors to a height of 25 metres, in continuity with the existing building, as an extension of the Eataly façade. Defined by a weave of natural materials and permeated by light and greenery, it is a resilient ecological building to the core. The architects apply passive solutions such as a north-south orientation, a tapered shape for the top floor, and an iconic form of external cladding with surfaces on two levels. Taking a closer look, the external shell of wooden slats forms a sunbreak, supported by steel ribbing, creating a high-tech form of latticework that acts as a filter between inside and outside so that the building can breathe, open up to the city and shelter from the sun. Plants grow on the organic wooden weave of the façade, rising from a series of terraces in which tall trees are planted in big tubs, so that the building looks like a natural organism vibrating according to the light and the growth of the plants. Native Italian plant species are preferred as most suitable for the climate and for the microclimate of the building’s façades.
The inner cladding consists of KVH hardwood sandwich panel boards insulated with wood fibre and covered with sheet metal, which are dry assembled so they can easily be dismantled, broken up by large windows flooding the interior with natural light.
Lastly, the interiors respond to a clear, simple concept conveying the Green Pea brand’s identity and values of conscientious consumption. Technical installations are left in view as a reference to the site’s industrial origins as the former FIAT factory, while the building’s walls define a sequence of paved pedestrian areas and landscaped areas.
Active and passive ecological strategies for maximising energy efficiency and reducing CO2 emissions, such as use of geothermal, photovoltaic, wind and solar energy, have earned the project an Itaca Protocol score of 3.5, making it a class A3 NZEB (Nearly Zero Energy Building).
In this way, the Green Pea building offers not only an invitation to conscientious shopping, but a tangible example of sustainable architecture to be experienced first-hand. 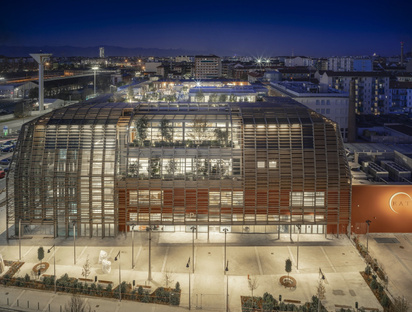 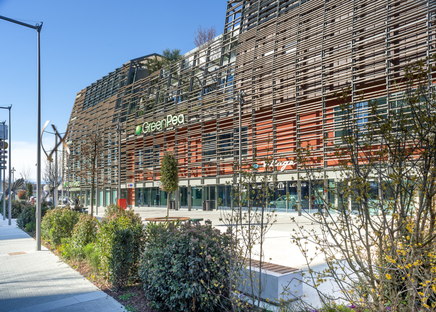 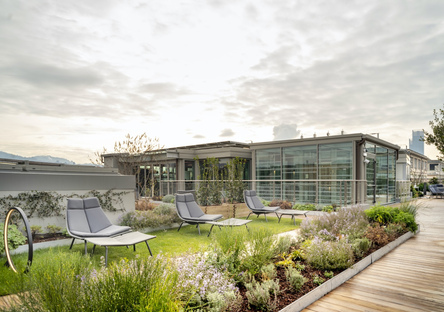 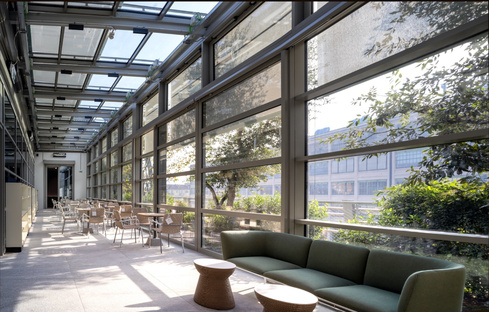 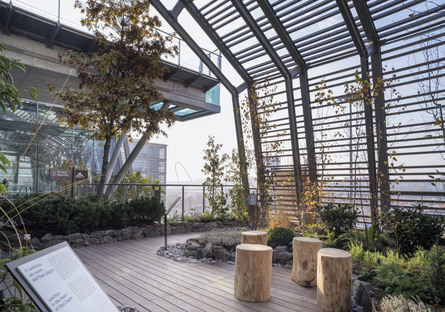 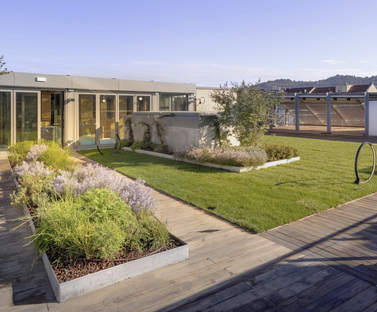 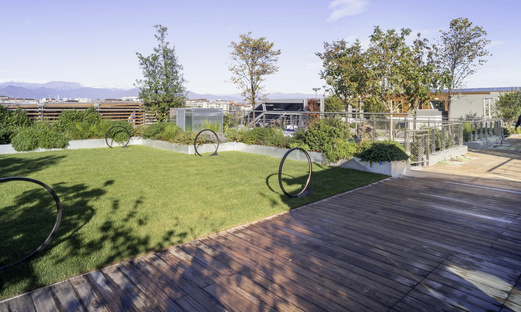 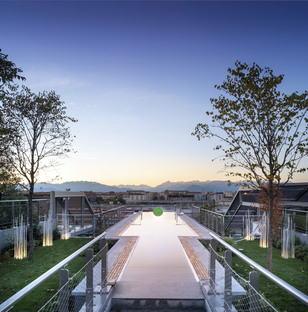 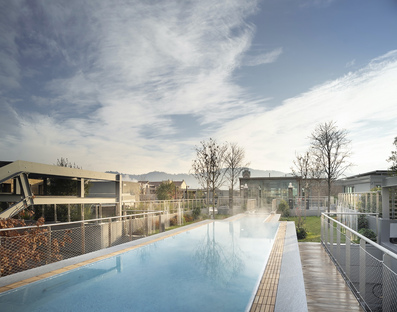 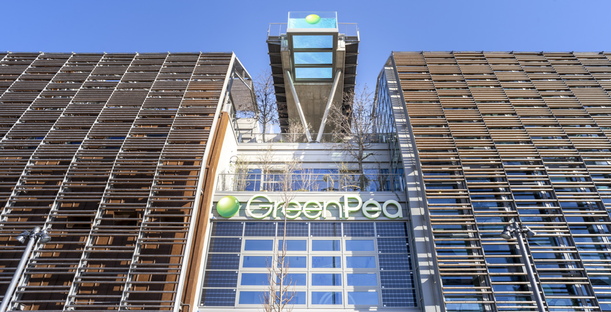 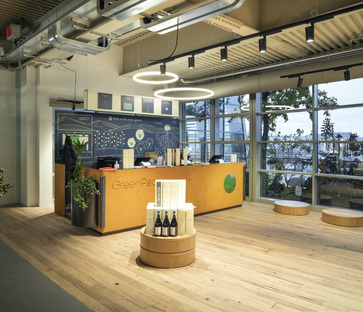 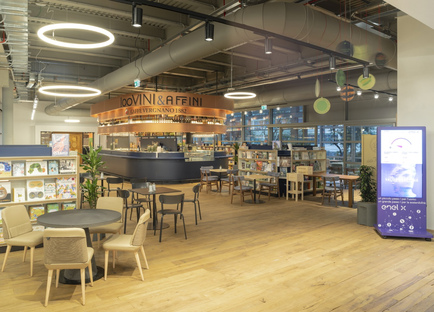 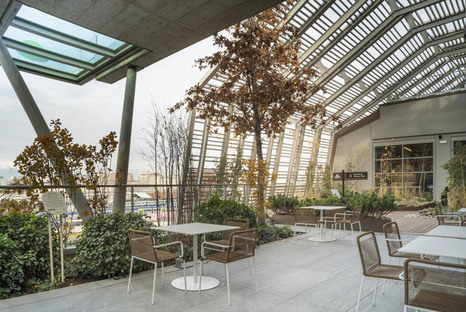 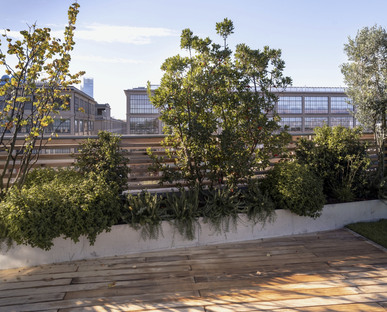