Fogon, a restaurant in Riyadh by Hitzig Militello Arquitectos

The Argentine studio, Hitzig Militello Arquitectos led by Fernando Hitzig and Leonardo Militello has designed the Fogon Restaurant inside the Saedan shopping mall in Riyadh, Saudi Arabia. The architects paired the typical materials of a British pub with a contemporary aesthetic to match the context. 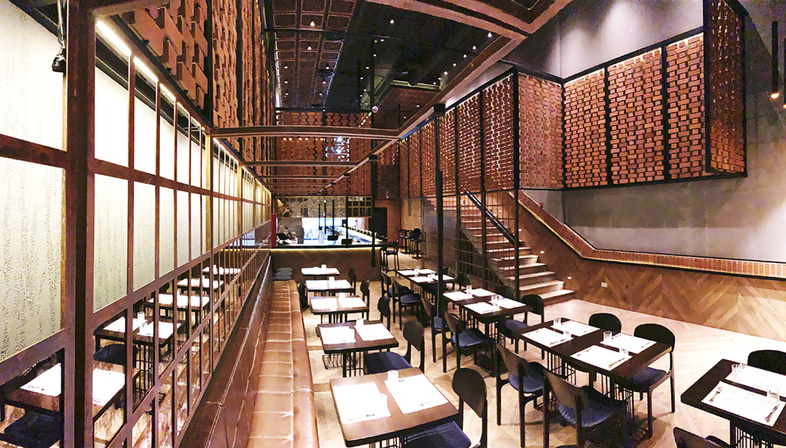 Very few of us really know much about the lifestyle and social dynamics in Saudi Arabia. We got a bit of an idea during the 2018 Venice Architecture Biennale when we visited the Saudi Arabia pavilion at the Arsenale. What surprised us about their first participation at the Biennale, called Spaces in Between was the feeling that Saudi Arabia is starting to be more open to a new approach to present-day problems, the same ones that are affecting not only the kingdom but our whole world in general, where attitudes are increasingly moving towards design-driven solutions (link article).
For instance, the proposal by Argentinean studio Hitzig Militello Arquitectos for a pub to be built inside one of the many shopping malls in Riyadh stems from the design to come up with an eye-catching solution that meets the customer's needs. Everything starts from the fact that the demographics in Saudi Arabia are changing and there are lots of small cities around Riyadh whose inhabitants are quite used to visiting the capital at weekends. This is because they are attracted by the shopping malls where they can meet up with friends in a comfortable, air-conditioned environment and spend a day or afternoon buying what they need for the week.
So, Hitzig Militello Arquitectos was asked to come up with a response to the client’s brief for a typical, traditional London pub which would recreate its aesthetics without falling into the trap of stereotypes and at the same time focus on a European-style venue with a contemporary artistic touch. And they were asked to do all of this in a rather nondescript shopping mall in the Saudi capital.
To create an eye-catching visual impact, the architects studied the typical pub materials and then went with two key elements for their spatial narrative: iron window frames and bare bricks. These two elements were then used in different ways throughout the venue and basically set the location’s mood. Fernando Hitzig and Leonardo Militello developed a metal framework system, a kind of breezy brick lattice that is vaguely reminiscent of the mashrabiya, a kind of projecting oriel window characteristic of Arabic residences, in this case much less ornate than the traditional carved woodwork. Glazed sections have different levels of transparency and are used to divide the venue into smaller spaces, referencing the smoked glass of British pubs. The wooden bar and floor are references to the pub and also add a touch of warmth to the environment, underscored by the partially coffered ceiling featuring floral decorations.
Fogon by Hitzig Militello Arquitectos alludes to the customary material language of English pubs but here the architects have interpreted it in a way that fits its location. This has made the venue new, unexpected, resulting in a very Saudi feel! 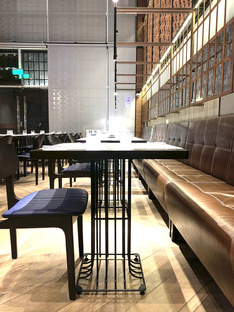 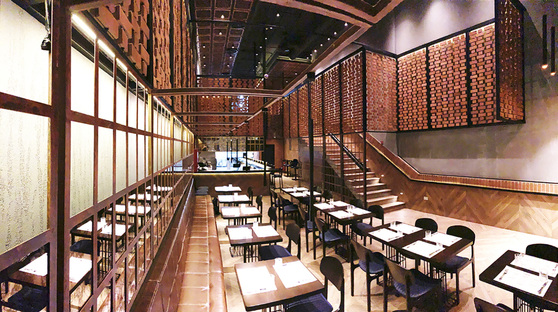 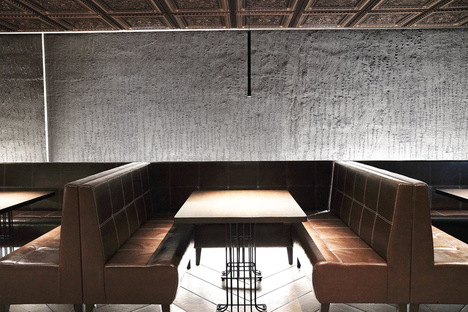 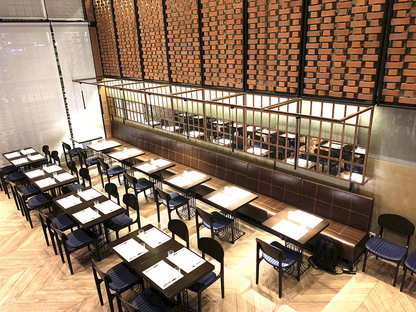 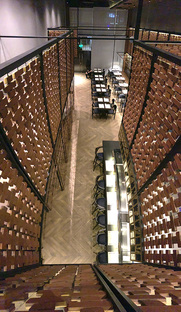 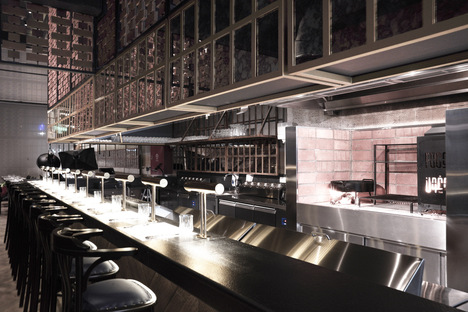 Spaces in Between, Saudi Arabia at the 2018 Biennale for the first time