The world-wide success of EarthHour, held on March 31, is partly due to the social media that brought people together for a common cause: to protect the planet.What is now a world-wide event was first held in 2004 on the initiative of WWF Australia, in the conviction that something must be done to attract people’s attention to climate change and its consequences for future generations. Leo Burnett advertising agency in Sydney and WWF Australia planned a campaign based on positive involvement of the population. The message is that we can all do something to protect the planet. The first name “The Big Flick” (of light switches) was replaced in 2006 by the current one: EarthHour, a concept with a broader significance, going beyond simply “turning off the light”.

The first official EarthHour was celebrated in Sydney in March 31, 2007 and international interest was already high, and in fact the next year 371 cities in 35 countries participated, growing to 6494 cities in 150 countries this year. The record-breaking participation is due not only to the world population’s growing awareness of environmental issues but to the power of social networks which provided viral promotion of the initiative.

Different kinds of initiatives and celebrations were held in different parts of the world, depending on the local time, and at 8:30 PM many cities turned off the lights in symbolic buildings such as the world’s tallest skyscraper: the Burj Kalifa in Dubai. Turning off the lights in iconic landmarks was an important way of publicising the initiative. As if in a relay race, Luzhniki Stadium in Moscow, little castles in Transylvania and the Eiffel Tower in Paris were switched off in sequence: key buildings in the public imagination which played an important role in conveying Earth Hour’s message, which Nelson Mandela summed up on Twitter on March 31, 2012 as: “Let us stand together to make our world a sustainable source for our future as humanity in this planet.” 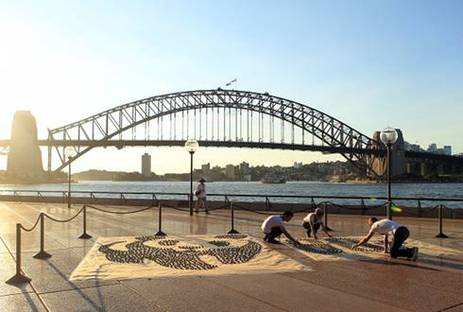