The Canadian architecture firm, Menkès Shooner Dagenais LeTourneux Architectes has redeveloped the iconic Dow Planetarium in Griffintown, Montréal and converted it into the new facilities of ÉTS Centech, an incubator for tech start-ups in Canada. 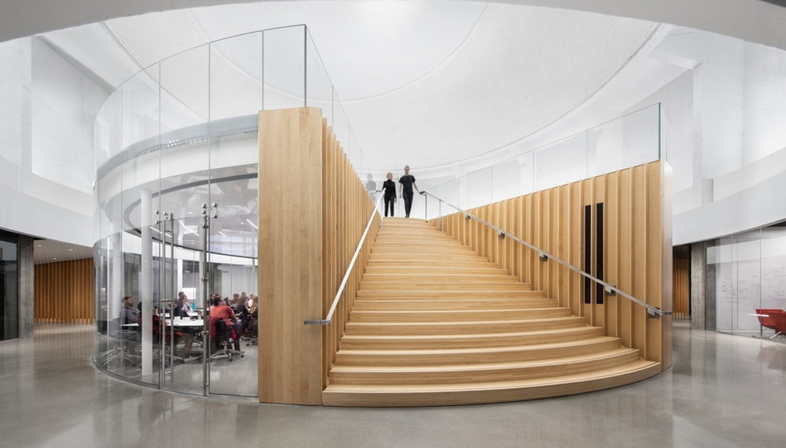 The Canadian architecture firm, Menkès Shooner Dagenais LeTourneux Architectes has redeveloped the iconic Dow Planetarium in Griffintown, Montréal and converted it into the new facilities of ÉTS Centech, an incubator for tech start-ups in Canada.


Closed since 2011 after operating for 45 years, the City of Montreal-owned Planetarium building was handed over to École de technologie supérieure (ÉTS), a public engineering school in the Quebec University system. The conversion project by Menkès Shooner Dagenais LeTourneux Architectes involved renovating and refurbishing the iconic Dow Planetarium building located in Griffintown, in the heart of the Quartier de l’Innovation and turning it into the new Centech premises. Founded by ÉTS, Centech is a non-profit organisation that aims to support tech start-ups by promoting their economic development and technology transfer.
So what better headquarters than architecture that is synonymous with research? The Dow Planetarium was designed by the architectural firm of David-Barott-Boulva and opened the year before Expo 67. It has been waiting for a new purpose since it ceased activities and the new Rio Tinto Alcan Planetarium opened in 2013. The client's idea was to set up an alliance between the university, the start-ups, the citizens and the ÉTS community by converting the site into spaces that foster encounters, collaboration and reflection connected to state-of-the-art tools and technologies. In addition to this, they wanted to create spaces of social diversity that could act as platforms for sharing knowledge.
The main challenge facing Menkès Shooner Dagenais LeTourneux Architectes, apart from improving its energy efficiency, was to find a way of bringing daylight into the centre of this building, designed and intended, by definition and function, to be both dark and opaque. At the same time, it was important to keep alive the memory and nature of the place, firmly rooted in the mindset of the people of Montréal.
The team of architects based their design around the concepts of revolution (about an axis) and the circular shape imposed by the building's intrinsic nature. Inspired by the perpetual movement of the universe and by the curious complexity of ancient instruments such as the astrolabe or the Orrery machine that translate it, the architects turned the former Dow Planetarium not only into a place that showcases and explains the cosmic movement but into a dynamic place which uses that. After the end of the era of observation, this building has now become a generator, accelerator and source of inventions. So the architects pursued a formal language to make the movement and acceleration real and perceptible: from the gears that are reminiscent of walls formed of a juxtaposition of vertical slats, to the concentric circles which are superimposed in the plan, everything is about mechanical rotation and spinning.
The core is an open circular space accessible on all sides that commands the entire spatial organisation of the building. Designed to be the heart of the accelerator, it is also reminiscent of the image of a crucible of innovation, the symbol of a facility intended for unplanned encounters and opportunities that are often at the origin of major discoveries. Similar to the ingenious principle underlying watchmaking and the cogwheel, from here a concentric circulation path leads to the café, the meeting space and the concept room.
Menkès Shooner Dagenais LeTourneux Architectes has preserved an icon of local architecture and has used the site's historical memory for the architecture storytelling of the premises, making all the adjustments required for its new intended use. 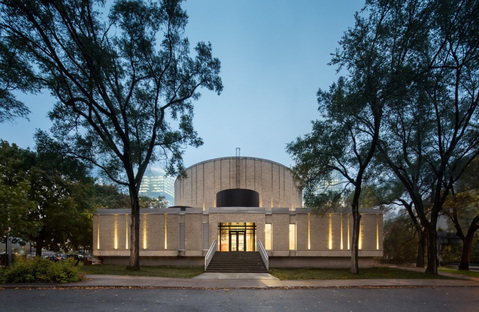 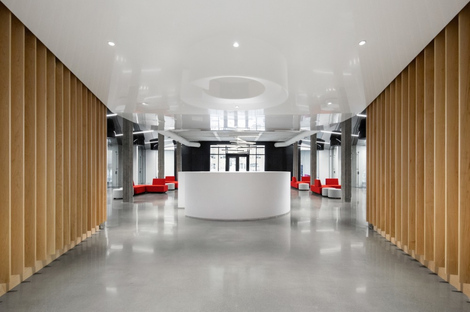 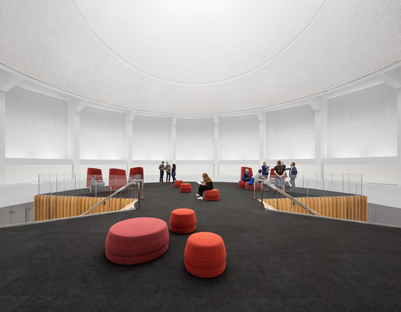 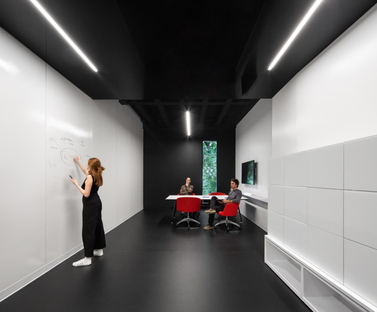 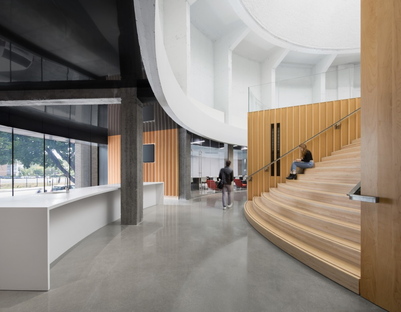 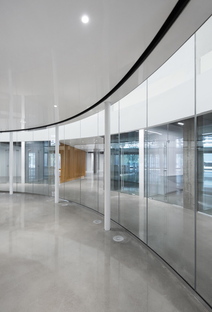 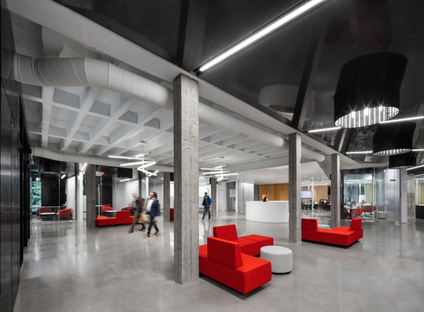 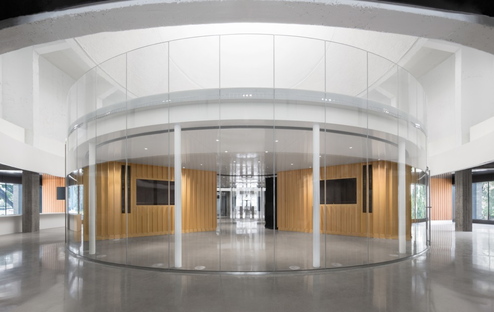 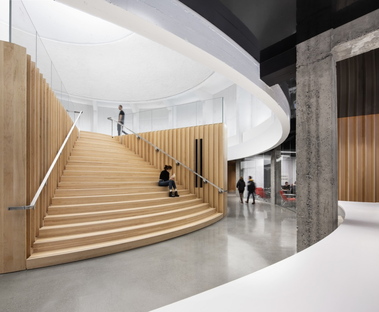 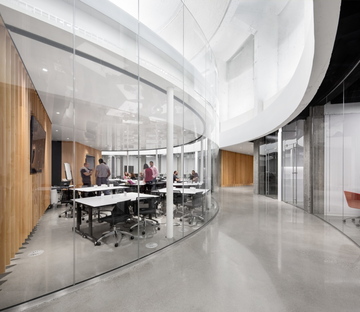 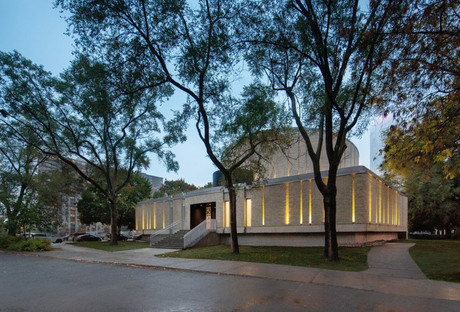