Designed by ABCP architecture, the ice-skating rink in Parc des Saphirs, Boischatel, Canada is a sporting facility sheltered from the weather in both summer and winter by an iconic glulam roof. The award-winning structure made out of locally sourced materials is very popular with the locals. 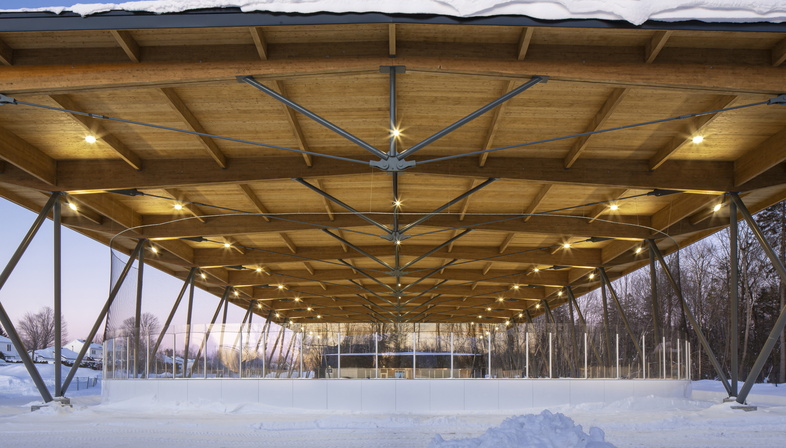 Boischatel is a municipality in southern Quebec, about 15 km northwest of the provincial capital. Since last year, the town’s population of just over six thousand has a covered ice rink in Parc des Saphirs which is popular not only with sports fans, as ice hockey is Canada’s national sport and skating one of the most common winter recreations, but with architecture fans too!
This is because the architects of studio ABCP architecture in Quebec City, commissioned by the Boischatel town council, built a glulam and steel roof with a harmonious slender silhouette that fits perfectly into its natural surroundings in the Domaine du Boisé. The elegant new structure not only shelters the outdoor skating rink from the weather but provides shade for athletes who use the surface as a playing field in summer.
A system of steel tie rods provides the free span of 28 metres required for official hockey games as well as practice. The roof’s unusual shape makes it an innovation in itself: the main trusses, with variable inertia, are scaled to optimise the volume of wood at all points in the roof. Each truss is made of two identical pieces of wood, put together to conceal the connections between trusses, tie rods and columns. The columns on either side of the playing surface create a zig-zag pattern which is not only beautiful but supports the roof.
On the north-eastern part of the roof is the service building where visitors are received, supported by a lightweight wooden frame and covered with a spruce canopy that emphasises its relationship with the big roof.
ABCP’s strong focus on detail goes hand-in-hand with the choice of locally sourced materials and local craftspeople to build the roof. The high-impact result is not only popular with the people of Boischatel but has attracted interest at the national and international levels.
In addition to the "Prix d'excellence" awarded by Centre d'expertise sur la construction commerciale en bois (Cecobois) in the "Outdoor Infrastructure” category, the covered skating rink project was awarded the “Prix d’excellence en architecture 2021” by the Ordre des architectes du Québec (link news Agnese). The judges praised the design of “this sporting facility permitting the continuation of the Quebec tradition of playing hockey outdoors”. Before this, the facility won an Honour Award in the international Wood Design & Building Awards for its outstanding use of wood.
Vadim Siegel, an architect with ABCP architecture, says he is very proud “of the impact of this project, which demonstrates that even the simplest infrastructure deserves careful thought and an innovative approach.” He also emphasises the role played by the client: “The vision of sustainable urban development integrated with the environment supported by the town of Boischatel allowed us to work as a team on the design of the building that is now receiving these honours, and above all being appreciated by the townspeople”.
The skating rink at Parc des Saphirs combines beauty with function in a structure that would normally be considered of minor importance, demonstrating that architecture with a capital A has a place even in small provincial communities. 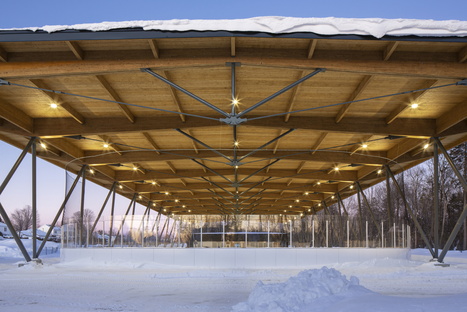 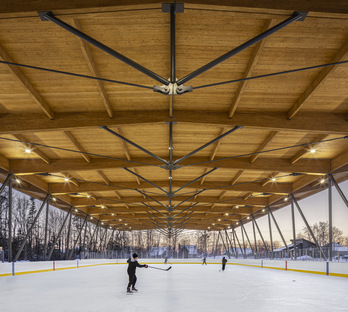 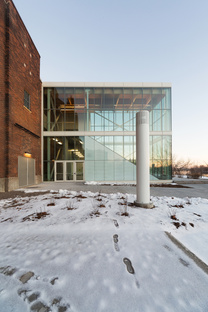 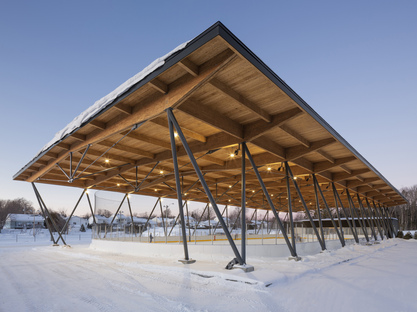 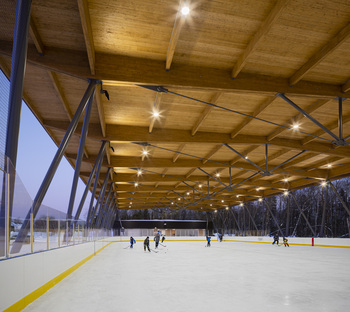