The Chinese architecture and design firm, Co-Direction Design, has worked on the reconstruction of an old village near Boshan, China, a city famed for its ceramics decorated with coloured glazes. The Chinese architecture and design firm, Co-Direction Design, has worked on the reconstruction of an old village near Boshan, China, a city famed for its ceramics decorated with coloured glazes. Reviving tradition thanks to their Pottery and Colored Glaze Workshop for the elderly.


Boshan is a city in its own right and a district of Zibo, a rapidly expanding metropolis in the Shandong province, central China. Here, like in many other parts of China, we can see an interesting trend taking off: preserving the historical memory of places through architectural reconstruction and requalification projects.
One of these is the project by the architecture firm Co-Direction Design, in Guyao village, near Mount Yuwang close to Boshan in a zone of fine natural beauty and with a fascinating culture of ceramic craftsmanship and art. In this context, the client decided to build a kind of township for the third age, a place where people could retire to after their working days are over but without being forced to give up the pleasures of creativity. Which gave the designers the idea of refurbishing an old ceramics factory and turning it into a creative workshop dedicated to art pottery.
Taking into account the legacy of local traditional culture and the essence of design, the project team decided to restructure the industrial space and integrate historical and cultural elements into it, with the goal of reaching a balance between past and present.
The whole space features a limited colour palette of ochre, black and white that is set off by the hues of the wood, stone, copper and brick materials used. Together they create a calm, restrained feel and into this backdrop the architects incorporated symbols of the culture of handcrafted ceramics dating back one thousand years.
Every detail in the interior design project by Co-Direction Design aims at reinforcing a solid and calm image to help the workshop users feel relaxed and at ease. The large block of granite that acts as the reception desk underscores these sensations and welcomes people into a foyer designed with a symmetrical layout that conveys a kind of oriental aesthetic.
Soft lighting is provided by means of regularly spaced wired glass screens that lighten up the solid materiality of the original architecture. The unusual ceiling draws your eyes upwards. This curved structure of thin slats is reminiscent of the ancestral Chinese architecture.
Traditional materials like glazed bricks alternate with white walls and grey concrete blocks to create the typical mix of languages seen in contemporary life, where the boundaries between eras and styles are blurred.
Which is exactly what the team from Co-Direction Design wanted with the new pottery workshop in Guyao, where not only did they craft a recreational centre, they actually turned it into a manifesto of this mashup of modern design and traditional aesthetics, combined with the legacy of Chinese culture. 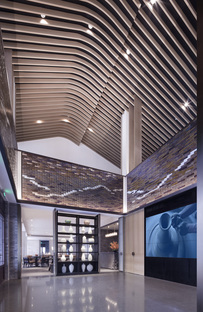 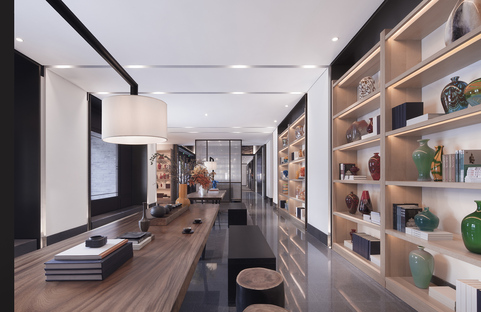 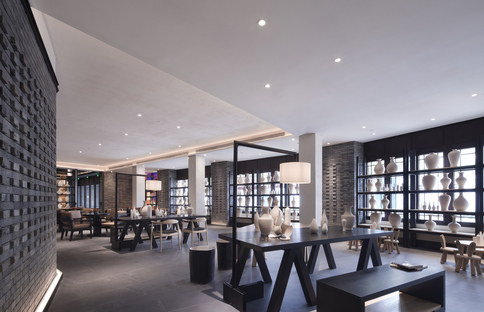