The municipality of Hirosaki decided to open a new contemporary art museum in its former cider and saké distilleries. Following a PFI competition (Private Finance Initiative), the project was awarded to Atelier Tsuyoshi Tane Architects, which has completed a painstaking reclamation of the brick structures. 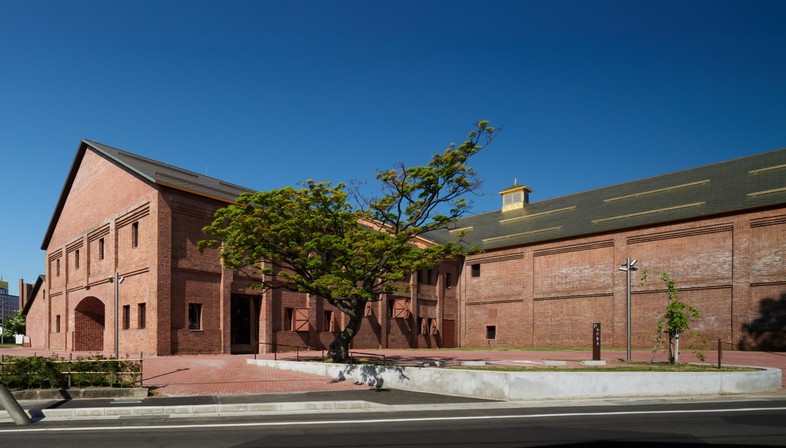 In central Hirosaki, Japan, a complex of abandoned warehouses stands to the south of the city’s famous castle, its most important monument, dating back to the Edo period. In 2017 the city government held a PFI competition (Private Finance Initiative) for reclamation of these abandoned buildings, won by Tsuyoshi Tane, a Japanese architect who has set up a big interdisciplinary practice in Paris. After more than two years of work, the city inaugurated the Hirosaki Museum of Contemporary Art in the reclaimed spaces in April 2020.
The warehouses date back to the early twentieth century, when a number of brick constructions rose in Hirosaki to house the city’s first saké distilleries. More and more structures were built over the years, many of which were converted for production of apple cider in this apple-growing region. The imposing brick industrial buildings containing the fermentation rooms and infusion chambers dominated the Yoshino-cho neighbourhood, which had become densely populated over the century. Handed down from owner to owner, the buildings remained in production until the 1960s, after which they were used to store the government’s emergency stocks of rice.
The buildings were eventually abandoned, and discussion of what to do with the warehouses began in the late ’80s; surprisingly, the turning point was an exhibition of the work of artist Yoshitomo Nara held in one of the abandoned constructions. Everyone realised that art could be the key to the conversion and new destination of the spaces, forming a link between the city’s industrial past and its future. In 2015 the city government purchased the complex and decided to hold a design contest for its redevelopment. ’Atelier Tsuyoshi Tane Architects won the international contest held in 2017 with the project that has now been completed.
At that time, Tsuyoshi Tane had just finished work on an important public cultural building that attracted a lot of interest, the Estonian National Museum in Tartu, but the Hirosaki project would be his first museum in Japan. The architect adopted a very different and more conservationist approach to this project in view of the city’s affection for the original structures, their importance in local history and the intrinsic beauty of the series of spaces. The project therefore aimed to safeguard the volumes’ original impact and appearance wherever possible and to establish a relationship between them and site-specific artworks, on the basis of the current requirements and goals for the complex.
Set on a lot of land defined by two streets converging at the tip, the old cider distilleries were composed of an L-shaped main building towering above a second, smaller construction; both had gabled roofs and brick walls, but the presence of pilasters and moulding on the façade confirmed the pre-eminence of the first volume, to which the second had always been subordinate. The setting was a green area extending into what is now Tsuchibuchi River Yoshinochō Green Space, as far as the railway and the river. The interiors were big unfinished industrial spaces with steel pillars, concrete floors and wooden roofs.
The architects eliminated the subsequent additions to the inside and outside of the original constructions that had brought disarray to the complex over the years, using a new outdoor pavement to identify access routes to the spaces, underline the museum area and differentiate it from the street. The basic concept underlying the project has been defined as “continuing memory”, explaining the reasons for preservation of the traces of the history of the site and the city by restoring the warehouses for a new use, hosting a museum and a café. History is viewed as a symbol, but also as a new opportunity, reflected in the museum’s choice of strategy. Hirosaki Museum of Contemporary Art now has a permanent collection of its own and also hosts site-specific artworks created by artists invited to come to the city, experience its life and discover its history.
The L-shaped main volume contains the museum, divided into five exhibition halls, including a 15 metre high gallery, a civic gallery, three artists’ studios and a library, while the smaller volume recalls the complex’s former function of making saké and apple cider, containing a café with a distillery in view that serves the museum but is also open to the general public.
The redevelopment project involved removal of parts of the plaster from the walls to reveal the original red brick. Where reclamation of the original brick was not possible, it has been replaced with new bricks in a similar colour, creating a pleasing change of hue in the walls without accentuating the difference between the original and the new constructions, so that the effects of time will make their surfaces uniform. The original structures were reclaimed by improving their seismic performance to prevent damage in the event of a major earthquake. The original metal window frames have been reclaimed or replaced with new ones where necessary. The main doors have been reinforced with concrete architraves, and the museum door has been reconstructed in concrete with a lowered arch and an intrados covered with new brick featuring a decorative pattern. Continuing to use brick as the identifying material, the new brick floor laid in the exhibition halls has also been extended to the outdoor pathways, ennobling the area surrounding the museum.
Paying tribute to the building’s history in both the museum and the coffee shop, a new titanium roof in a “Cider gold” colour uses a diagonal roofing technique to produce a vibrant hue of gold, so that even when seen from far away, the big red complex with a golden roof serves the function of landmark that a museum should always have. 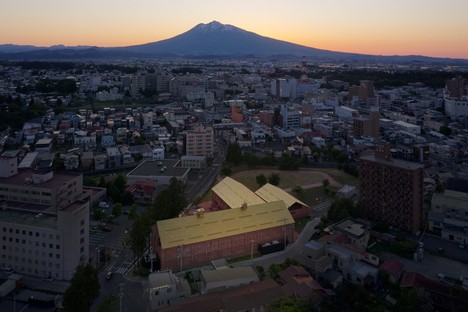 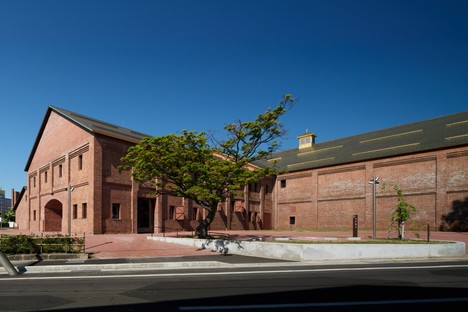 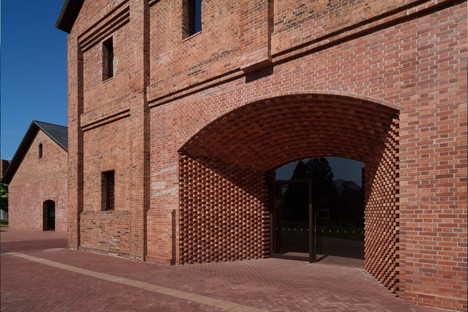 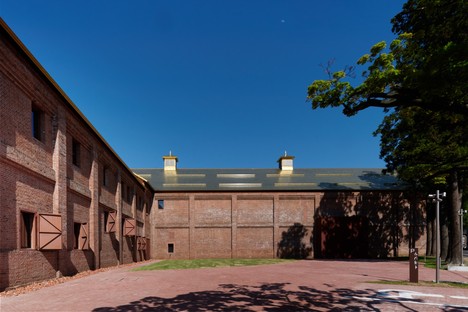 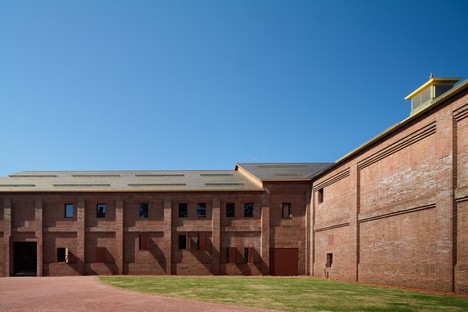 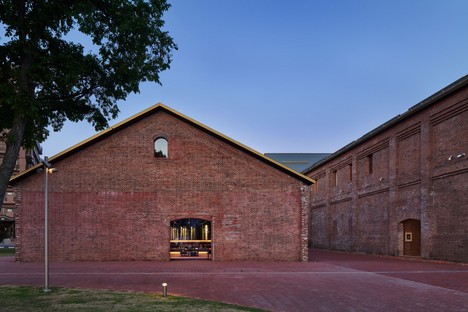 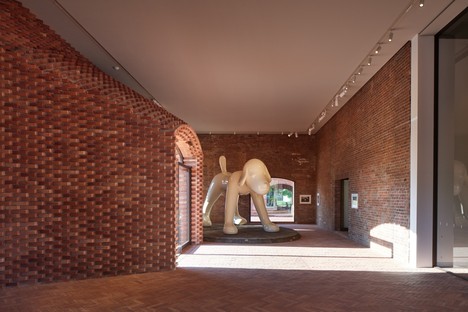 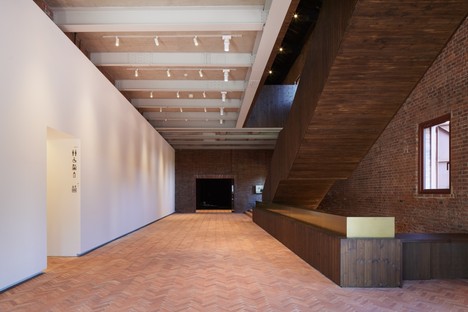 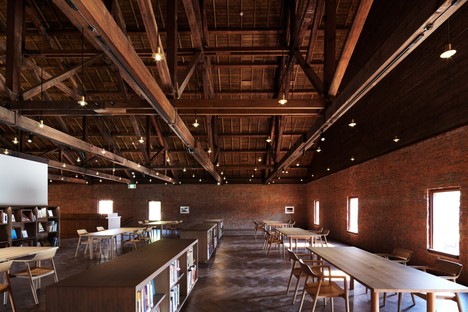 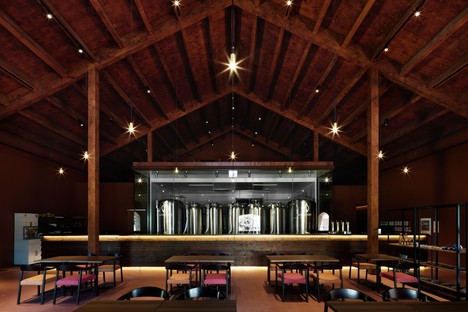 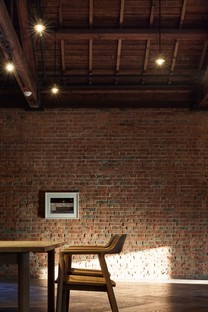 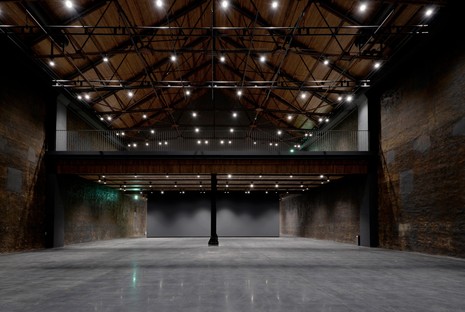 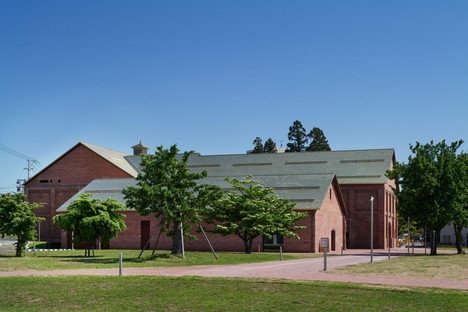 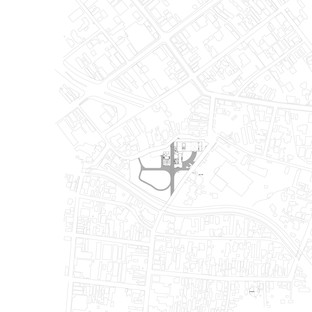 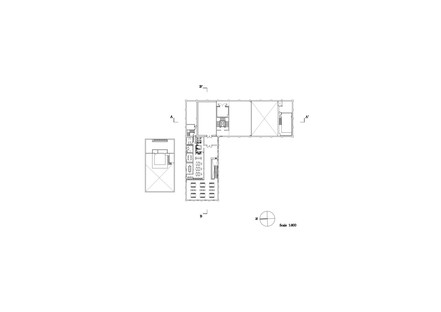 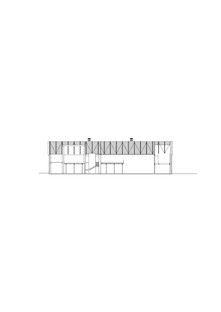 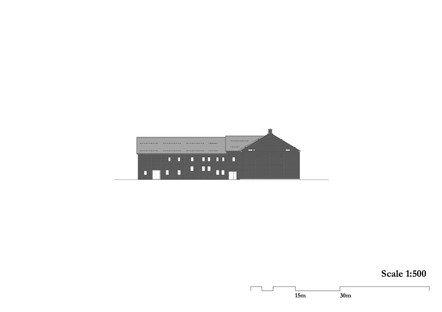 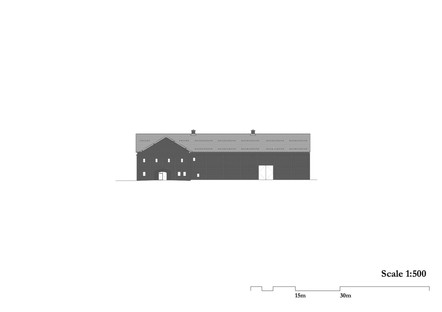