Architect Arthur Casas talks about his plans for the Brazilian pavilion at EXPO 2015. From the inheritance of Paulo Mendes da Rocha and Oscar Niemeyer to environmental policies, the architecture of Arthur Casas’ pavilion for EXPO 2015 abounds in symbols of today’s Brazil. What does your interpretation tell us about contemporary Brazil, and how does the pavilion’s architecture represent the trip across Brazil that your studio depicts along the Amazon River?
We aimed to focus on very simple elements to transmit our idea of what Brazil is today. For instance, a very powerful symbol, that of an amorphous net, contrasts with the rest of the architecture, which is quite sober. Instead of creating contradictions, these ideas are complementary and they speak of contemporary Brazil’s potential as a nation that is inherently complex but at the same time capable of achieving very ‘down to earth’ things, such as being an extraordinarily vivid democracy or one of the world’s greatest agricultural producers. That trip across Brazil should be a trip of discovery beyond stereotypes. The idea of pixelating part of the Amazon River within the plantations was to remember that it is a vital part of our ecosystem and its preservation is not contradictory with agriculture. People seem to ignore that containing deforestation is a huge success in Brazil, though much still has to be achieved to completely halt it. The increase of productivity in Brazilian agricultural is phenomenal and happens within existing planted areas, not through expansion. So that symbol resumes this idea, the Amazon basin can and has to be preserved and our agricultural potential doesn’t imply its destruction, quite on the contrary, it also hinges on its conservation.

The Brazilian pavilion consists of an indoor volume and an outdoor one, a functional architecture that develops into symbolic architecture. Can you describe the concept underlying your design?
The rules established by the Expo 2015 comittee where very interesting, as they requested open spaces, a rationalization of the architecture that should not lead to a bunch of autonomous buildings trying to look more strident than its neighbors. It was very natural for us to come up with the idea of a large plaza, a breathing space that would make this transition from the outside to the inside. That outdoor volume is completely porous, the iron panels protect from the sun, but not from the rain, so in that sense it is indeed a hybrid space. The symbol of the architecture itself hinges on this simplicity of materials that make reference to our soil, such as iron, and to our architectural history of other pavilions such as the ones designed by Paulo Mendes da Rocha, Sergio Bernardes or Lucio Costa and Oscar Niemeyer in the past. Our architecture is still very attached to modernism, to the idea that solutions should be elegant and sober, that symbols are stronger if they don’t abuse of vocabulary and falls prey to mannierism. So, quite simply, one enters a plaza, discovers different plants, their history, they can stroll around the space, climb over this amorphous, generous net that makes reference to the Riposatevi exhibition by Lucio Costa, here in italy, 50 years ago, and they can just relax or play if they want. Gentle ramps invite people to climb and see the space from different viewpoints, then they can choose to enter the closed spaces and stroll around many exhibitions on Brazilian agriculture, technology, design. All should be very spontaneous, we did not want to impose anything on visitors, no spectacularity, just a pavilion that has a lot of interesting information to give on a crucial matter to the world.

How will you get across the message that Brazil is one of the world’s biggest food producers, and so it’s important to invest in agriculture?
I think this message already exists; Brazil is already within the top producers of almost every main agricultural product. The most important message is not to show off some agricultural superpower, what we need to showcase is how this process affects the country, our society, and our ecosystems. Brazil is a country that is very aware of these challenges. We have, by far, the world’s highest rate of biodiversity. There is still this very widespread anachronism that associates our development with the destruction of the Amazon forest or that if we invest in biofuels people will just get hungry and every ecosystem will perish. This is pure false propaganda, Brazil is probably the country with the strongest investments on environment protection these days. This is not propaganda, these are facts: over 50% of the conservation areas created in the world over the last 15 years was made in Brazil. Our productivity rises exponentially, and does so within agricultural belts that are thousands of kilometres away from the Amazon. Of course there are still great threats and nothing is more stupid than tearing down trees and eliminating species that can literally save us to replace them with pasture for farting cows expelling methane! But there is a consensus around this issue, important achievements have been made and huge challenges face us for the future. Our message is to inform people of what’s going on right now and what can happen to address these challenges. How companies such as EMBRAPA are revolutionizing biotechnology by increasing productivity, inventing efficient biofuels and altogether helping the conservation of our planet. Investments in agriculture are quintessential for our future, and as the country with the largest potential for it (we are a top producer but cultivate barely 30% of available areas for agriculture in our territory) we bear the responsibility of feeding the world while preserving our ecosystems. As the marvellous scholar Bertha Becker once affirmed about the Amazon: the forest will not stand on its feet if we don’t deeply understand its value, including its economic one.

There has been a lot of controversy surrounding Expo, from the entrepreneurs in the construction firms who have been arrested to the amount of time it has taken to complete the work, from citizens’ doubts about the purpose of the event to the No Canal and No Expo committees. To what extent has this influenced your conception, design and development of the pavilion, and how; what is your opinion of Expo today?
This is a sad reality surrounding this type of event. We saw this in the world cup in Brazil and the same should happen with the Olympics. We are still far from being able to ensure clean and open processes when it comes to public buildings altogether. Should then our office abstain from participating and deny reality? I don’t think so. It is the same case with other topics we have discussed: let’s abandon agriculture and let nature retake completely our country? We are at a turning point where transparency imposes itself on every public process and this is very challenging and positive. All these scandals happened before, but now they come to public and more people get punished. This ensures next time some of those actors will think twice before participating. The Expo is an opportunity for Milan, for Italy. It is supposed to leave a legacy, not become some cemetery of useless pavilions. Its parameters established that all the buildings had to be sustainable, with easy process of assemblage and disassembling. We made our part and conceived a project within this scope. This expo will teach us good lessons and I think citizens that have all the rights to be dissatisfied with it should take part on its future transformation. It is not just a circus for tourists as some depicts it, it constitutes an opportunity for vital discussions surrounding a crucial issue, and in terms of urbanism, it is an interesting proposal for bringing life to a derelict area. Is it perfect? Definitely not. Is it an interesting alternative? I believe so and it becomes part of a larger debate, which is, how us, mankind, establish much needed forums to discuss the topics that affect societies altogether. Does it have to be in this form of an expo? Does it need to leave large imprints that have no purpose afterwards? Some answers are obvious, other still need much discussion and the next 6 months are an awesome opportunity to do so.

The Brazilian pavilion will not be demolished, because it has been designed to be easy to dismantle and rebuild elsewhere, completely or in part. At the end of Expo it will be given to the City of Milan. How did you come up with the idea of keeping it, and how was the structure designed and developed with this purpose in mind? How will the building be used in Milan in the future?
It was part of the brief: it had to be made this way, easily assembled and disassembled. Which is quite logic for a pavilion, I mean, it’s senseless to make some structure that cannot be recycled or reused afterwards. We had a very very tight budget. The recent devaluation of our currency did not help, as the budget was established in Brazilian reals, of course, and it lost over 30% of its value in recent months. So solutions had to be very economic and still transmit all these messages we have discussed. We really wanted the pavilion to come back to Brazil at first; with its exhibition elements to showcase it to people that won’t be able to make it to Milan. But transport costs were prohibitive for our small budget, so the best was to give it to the city of Milan. It is very flexible as a space; the city can move it elsewhere as it pleases and it won’t be expensive to adapt it for other purposes. I think it should be an issue to be discussed by the Milanese, where should it go, how can you use it? Our roles as architects where fulfilled: a lot can be done with a structure that becomes a pleasant small plaza, with some rooms for exhibitions and an auditorium within a discrete volume. If the city wants to discuss it, we would love to make our small contributions to the debate! 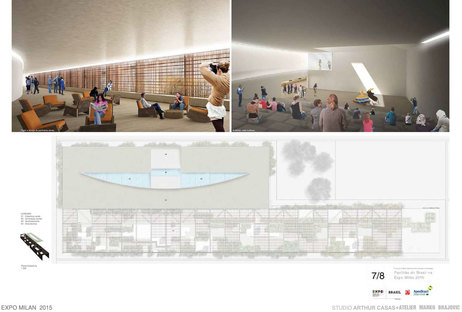 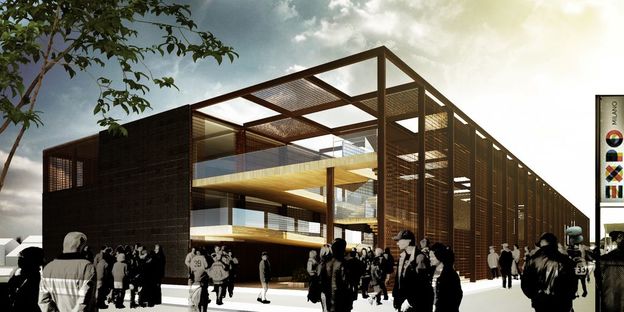 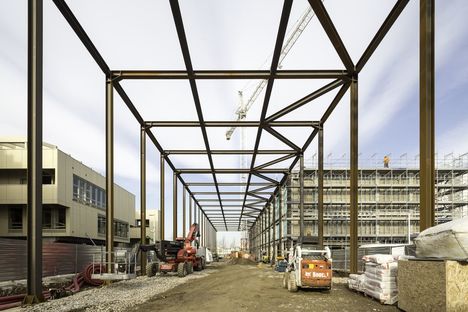 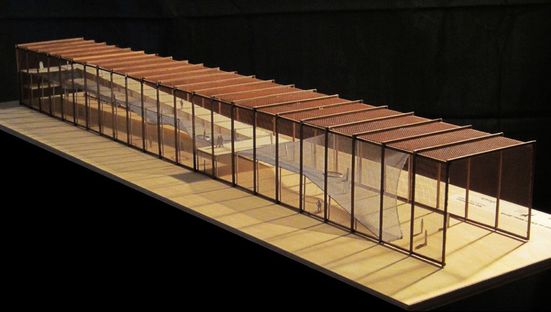 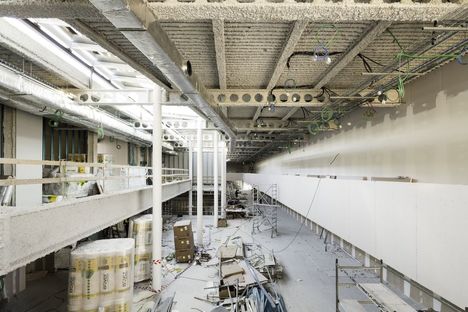 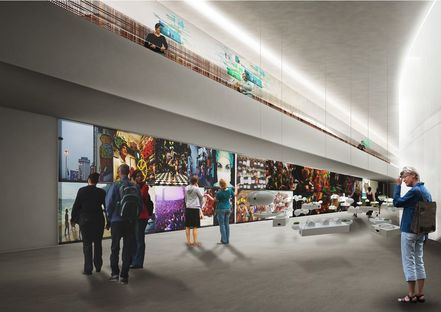 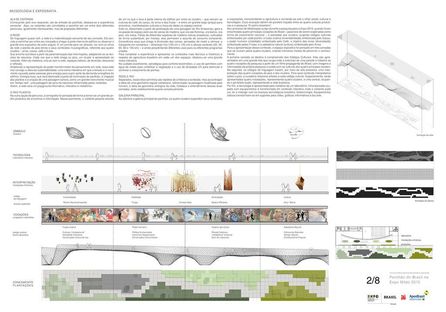 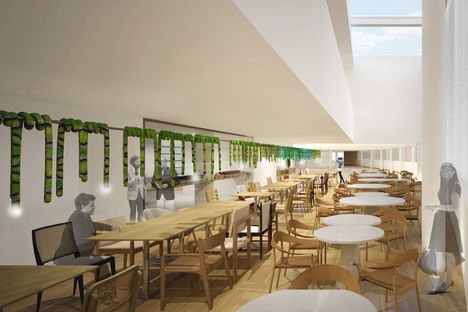 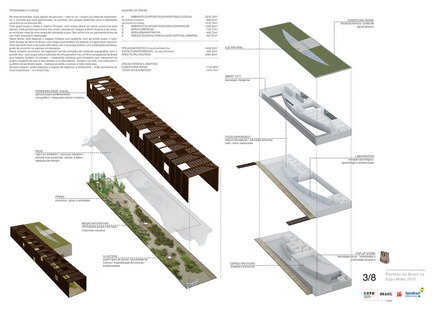 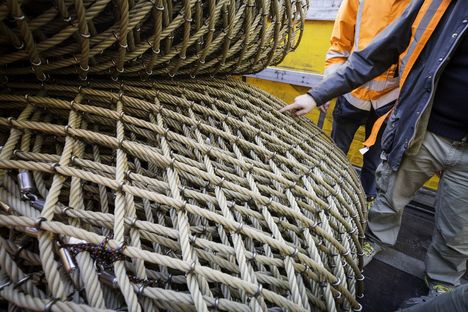 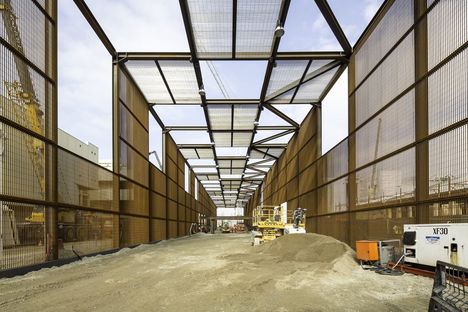 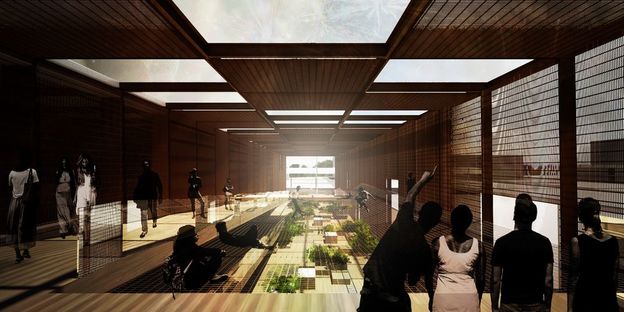 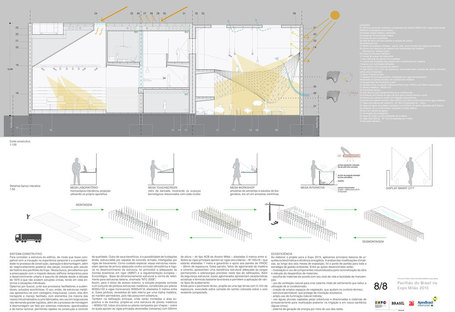 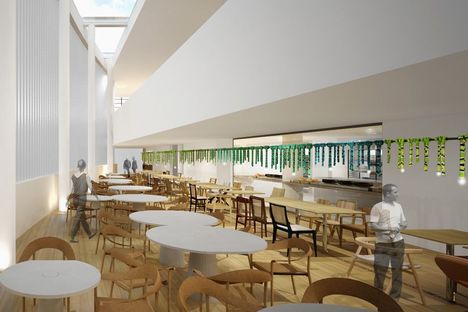 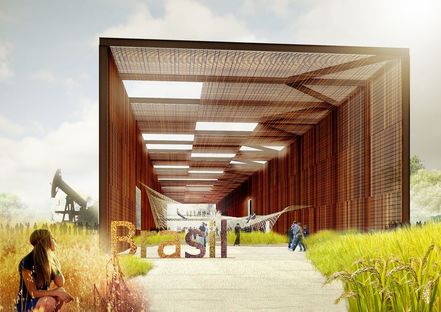 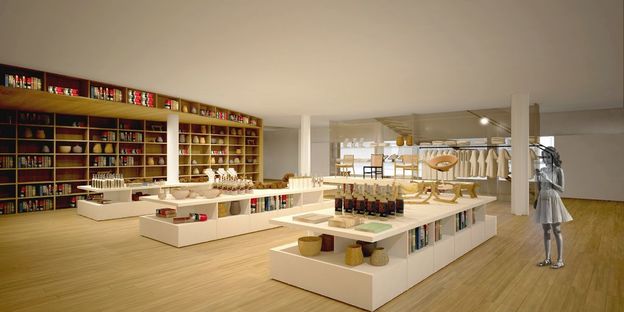 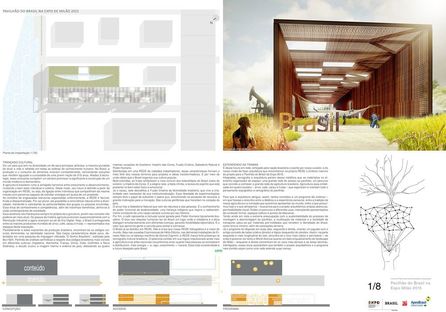 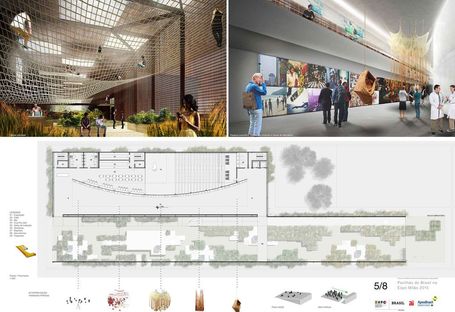 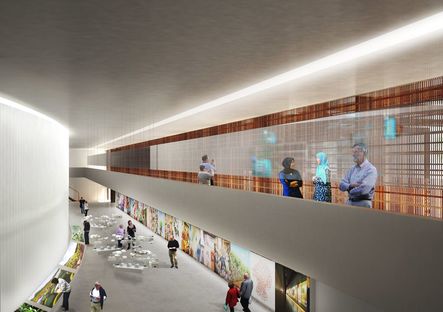 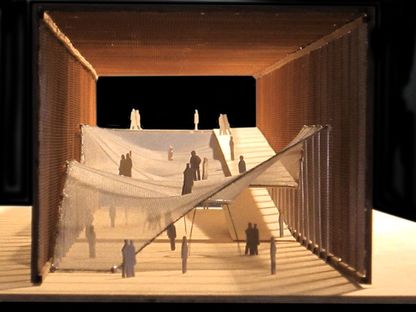 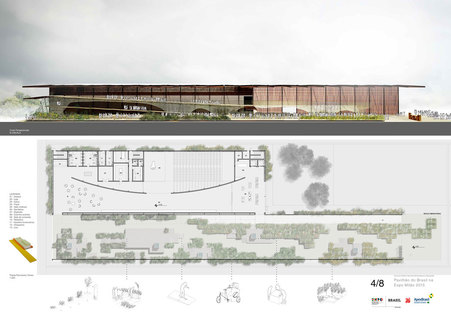 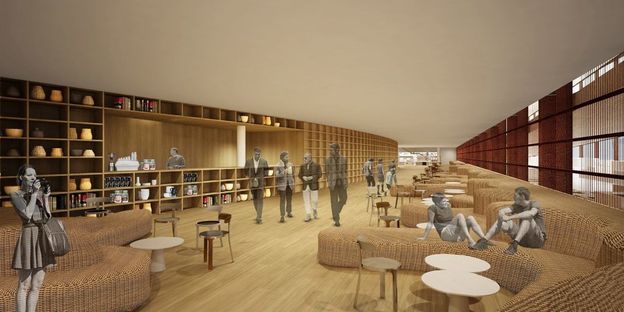 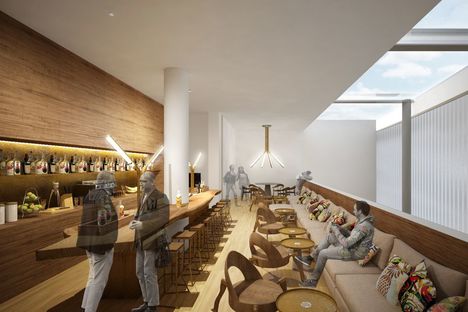 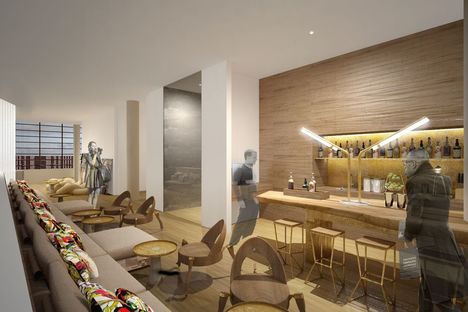 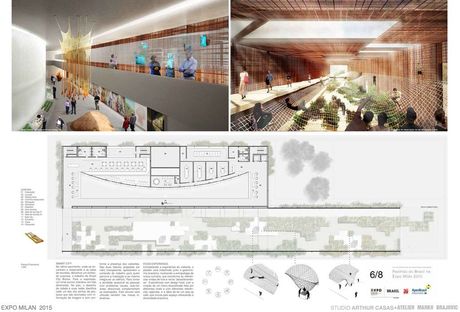