In a university campus, Studio Gang have created a theatre with a highly evocative power, thanks to its opening roof, based on a simple and relatively inexpensive technology 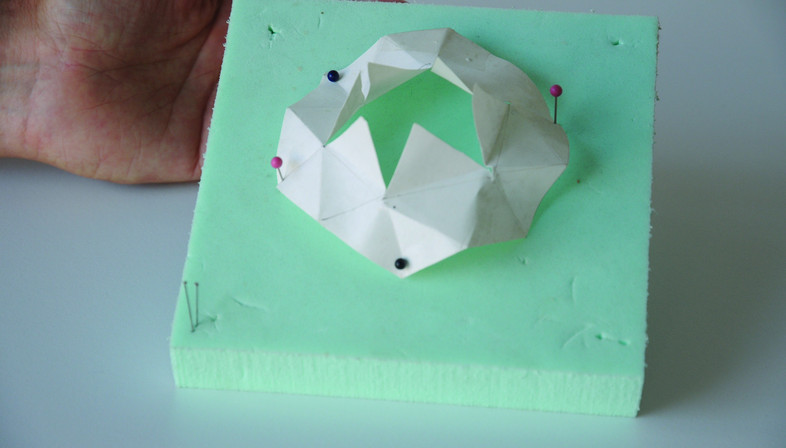 In Rockford, Illinois, there is a theatre with an opening roof, a feature that has earned it the name of Starlight Theatre. The building has 1100 seats. The whole area of the stage faces onto the semi-circular stalls area above which there is a simple structural hexagon, consisting of steel trusses to which the same number of triangular panels capable of opening

The project originated from an idea put for the first time on paper, or rather, with paper, cut and folded in origami-like fashion. An important rudimentary means of fixing in order to implement the engineering in a natural way. With this simple little model, the degree of formal simplicity originated in the beginning was kept, so as to ensure good manageability during both the design and the executive stages , and finally with advantages during use.

Studio Gang's idea was possible thanks to the advisory services of Uni-Systems of Minneapolis, who conceived and created the technological device that makes it work, and then applied it to the structure designed by the architects.

Each of these triangles, therefore, contains a mechanised device able to act as a lever on the beams so as to make the roof turn and open, creating a special visual effect.

The whole stage machinery, relatively inexpensive, consists of a set of mechanisms, the main one being a jackscrew. This generates the torque required in order to enable rotation of the roughly 15 metric tons of each single triangular panel, although the whole system has been tested to lift 50 metric tons. Each panel has the noteworthy size of 11 metres along the base by a length of almost 13 metres. To move them, each motor has an output of only (so to speak) 5 Hp. The whole system is managed by a computer operated by the stage engineer. Should the system not work, due to possible redundancies of its own, a device is fitted inside each jack that prevents it from back-driving, that is to say it prevents the panel from being opened more than it should be. In addition to the jackscrew there are also two other jacks that would support the panel in the event of a sudden failure, avoiding accidental falls onto the stalls. It should be specified that none of these mechanical parts are visible from outside, since the panel is designed to contain them all.
The foyer, which is the volumetric base of the whole dome, is a reinforced concrete building with porthole-like windows here and there on the facade that, especially in the evening, give rise to an original lighting effect. The finishing materials coating the surfaces vary from wood to aluminium and are capable of characterising the whole environment. 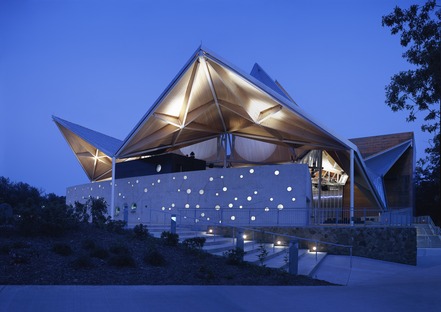 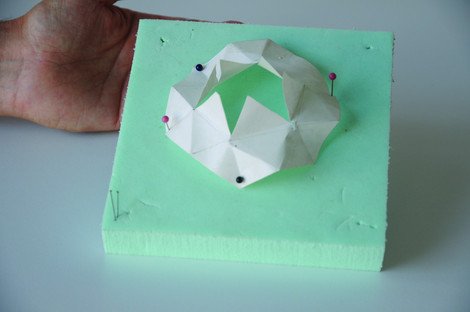 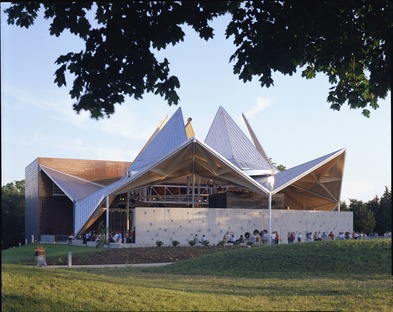 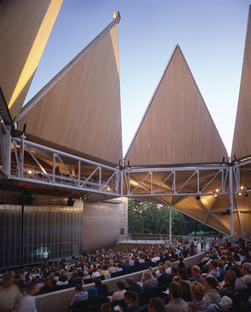