Gravity and light join in a new synthesis in Alberto Campo Baeza’s house in Monterrey, Domus Aurea. A homage to Luis Barragàn, Campo Baeza’s Domus Aurea has a gold wall that commands light throughout the entire project. Elements of the Spanish architect’s design philosophy appear in the home. 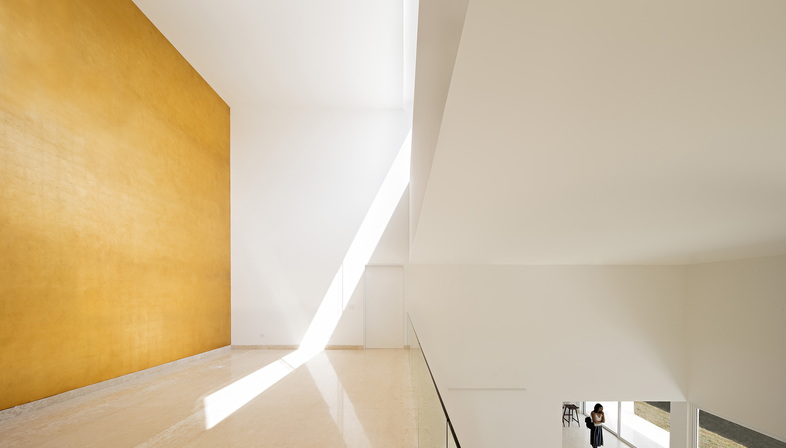 The Domus Aurea in Monterrey reveals Alberto Campo Baeza’s intention of looking back at the history of architecture with homages and cultured references. First of all, the name, Domus Aurea, recalling the Roman Empire and the architect’s beloved Italy, borrowing from the residence of the Emperor Nero (who is said to have lined the inside of his home with gold) the idea of decorating one of the walls with gold, to act as a fulcrum for light in the most important space in the home. But this historical connection is not enough, and in fact it may be purely a coincidence. What Campo Baeza says is that the gold wall was inspired by Luis Barragàn, revealing the heritage of a great master of twentieth-century Mexican architecture.
Observing the project sketches and how they evolve in the layout, we may note a series of symmetries and ratios of proportion typical of amphiprostyle Greek temples. The layout is square, not rectangular, and all the most important elements remain unvaried. The house is surrounded by an external wall one floor high, representing the base of the temple. As in an amphiprostyle temple, there are porticos on the two main walls, reproducing two rows of columns in the layout. In between them is the space of the pronaos, followed by the naos, the inner chamber of the temple that contained the statue of the god or goddess and also plays a central symbolic role in Campo Baeza’s project.
Here he has created the intersection of two spaces of double height, one on the ground floor and one on the first floor, which together create a space filled with diagonal light. A tall window lets in the sun’s rays so that they strike the gold wall on the first floor and are reflected down into the middle of the living room. This effect of light bouncing off sculpts a diagonal space, transforming it into a form of “lay divinity”, a leap from the Greek architectural tradition to Luis Barragàn.
The solid golden light of the Domus Aurea strives to achieve the golden light of the convent of Capuchin sisters in Tlalpan (1954-1959), the light that filters through the yellow-painted grates and the windows of the chapel, a form of light that was invented by medieval and Gothic architecture and has undeniable spiritual significance. In the lay setting of a private home, Luis Barragàn’s religious light becomes Alberto Campo Baeza philosophical, architectural light.
Paraphrasing the architect’s own words, we might say that architecture is a box of space which he has skillfully but simply perforated to let light in:
“And so, when the architect appropriately traps light, LIGHT perforates the space formed of structures which, however heavy they are, need to hold onto the ground to convey the primitive force of GRAVITY’, break the spell and make that space float, levitate, fly. Santa Sofia, the Pantheon and the Ronchamp all offer tangible proof of this extraordinary reality”. Campo Baeza’s architecture aims to demonstrate its geometric weight only to lift it up with light.
The white of all the walls is the ideal background for the route the light takes. Alberto Campo Baeza sees white as absence: absence of chaos, absence of disorder, absence of uselessness, absence of redundancy. And the heritage of the Modernist movement.
Architecture permeated by light becomes a pure skeleton, allowing itself to be raised up by the muscular power of light. 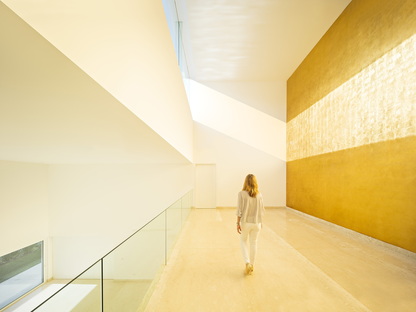 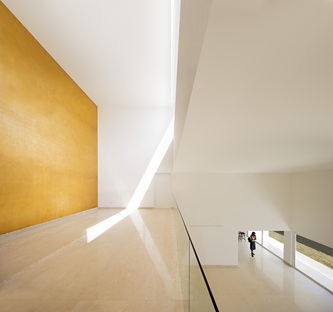 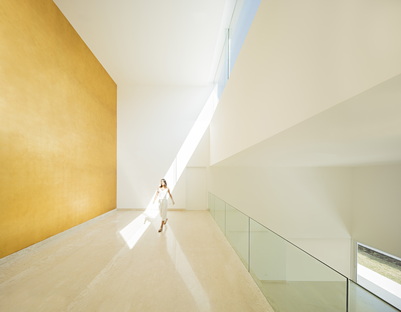 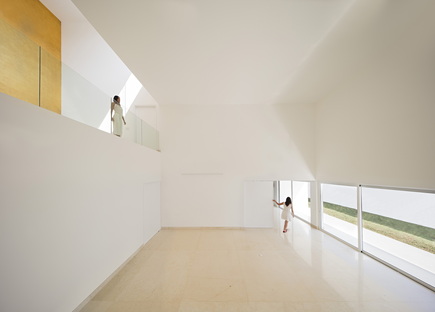 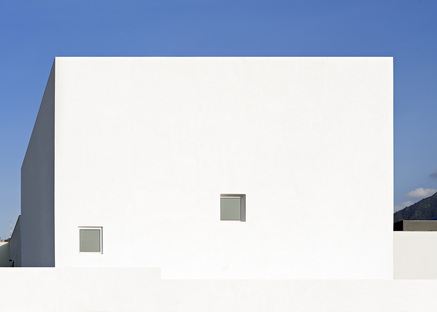 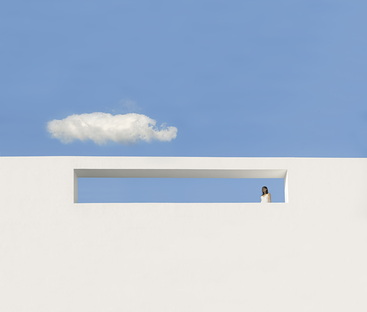 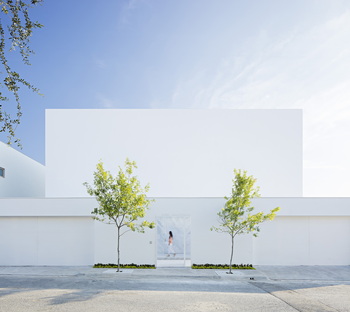 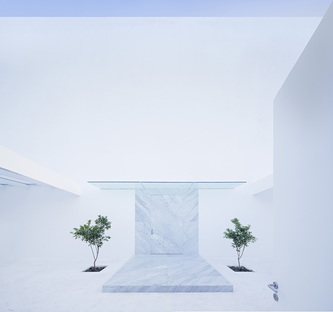 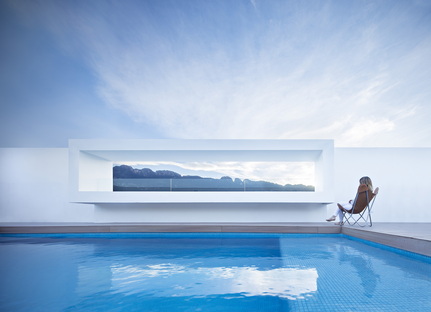 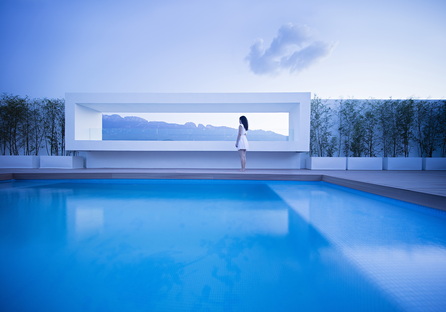 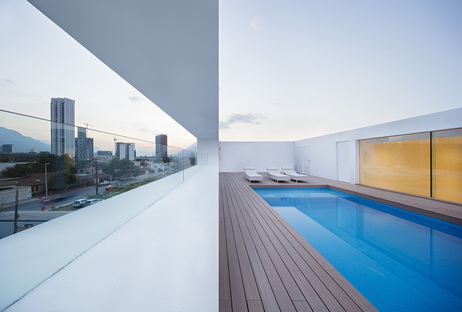 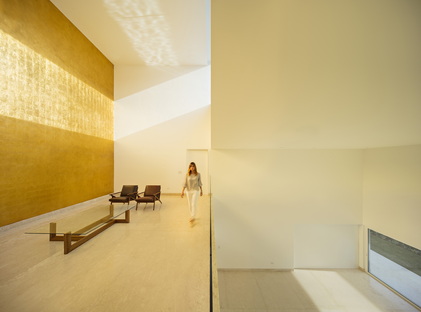 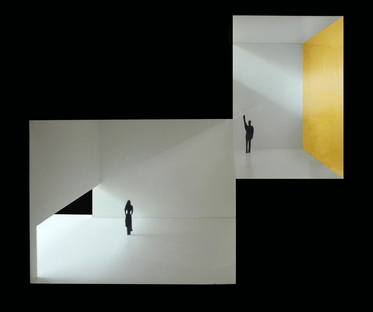 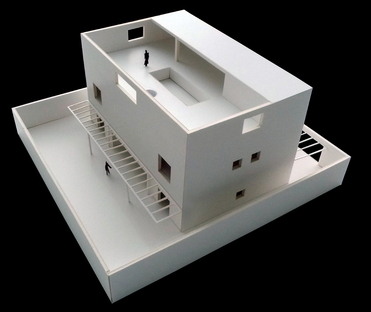 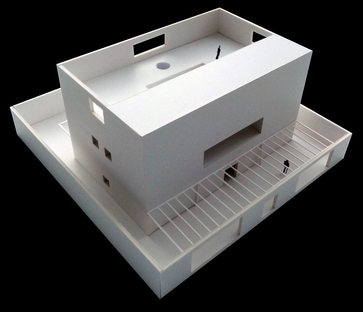 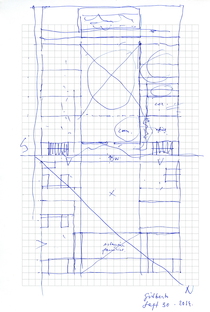 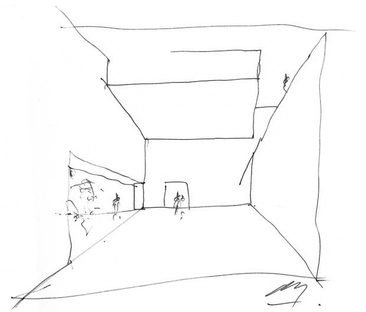 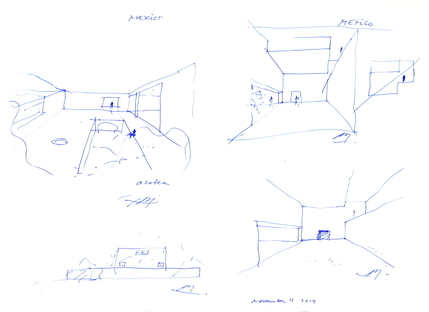 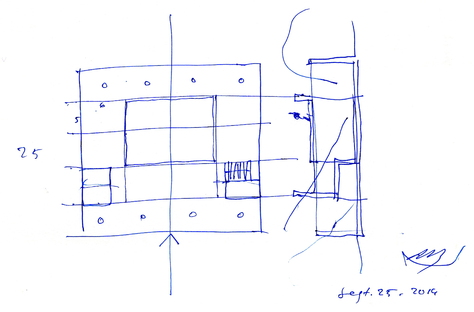 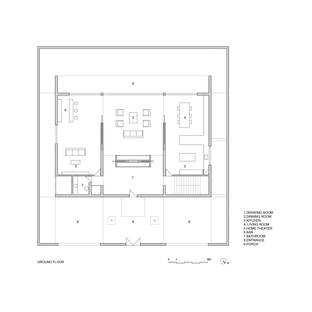 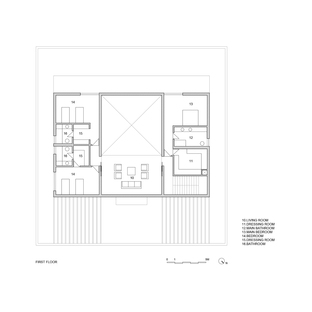 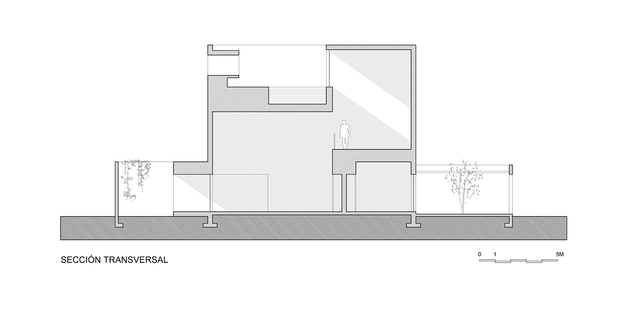 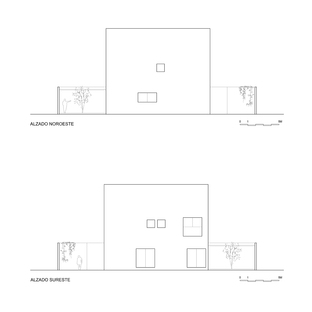 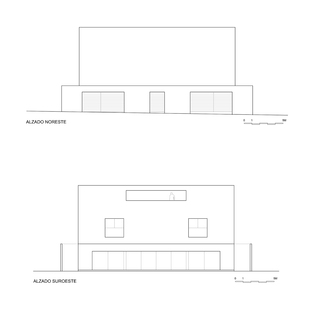