Akihisa Hirata develops a new living concept in his Overlap House in Tokyo, in which overlapping living spaces spiral around green areas. The wall decoration allows the house to blend into the neighbourhood. 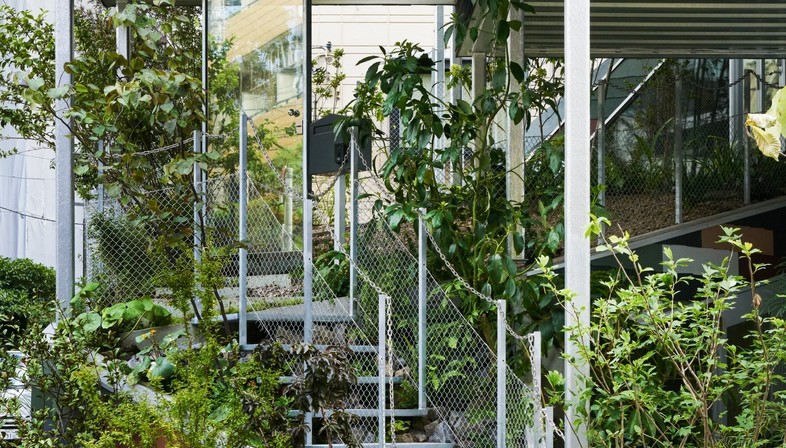 Akihisa Hirata designed Overlap House, a new residential building in Minami-Otsuka, in northwest Tokyo. Inspired by the idea of a body that is transformed with time, without hiding the signs of this evolution, and by the concept of urban stratification which reveals and recalls territorial policies, relations among neighbours, and the memory of places over the years, Akihisa Hirata goes back to the theme of the architectural whirlwind, that centrifugal force that was first expressed in his Art Museum & Library in Ota. Here it is back in a residential development of three overlapping staggered offset apartments.
Akihisa Hirata had already experimented with the idea of using greenery as a form of contamination between private and urban public in his famous Tree-ness house for art merchant Taka Ishii in the Toshimaku district. Here he returns to and further evolves the concept of the replicable modular composition in larger housing complexes. As in the Tree-ness House in Tokyo and the Art Museum & Library in Ota, the building opens up to the outside world, using green areas as an extension of living space and at the same time as a connection with the neighbourhood. The slope of the land creates a system of forces that rise and revolve around a centre, made evident by the alternation of full and empty spaces, of constructions and vegetation.
The Overlap House is the result of overlapping of three living units, three apartments on different levels, prolonging the image of the slope by giving each of them its own private garden; the gardens on the second and third levels are the green roofs of the first two units. The project’s level zero corresponds to the southwest corner of the lot, where a steel staircase revolves around the building, leading directly the top apartment, apartment C. The door to house A is at -150 mm, while that of house B is at +2700 mm, and an internal staircase links the living room level and the eastern part with the kitchen and bedrooms.
Apartment A is located slightly higher than street level, and as the site is on a slope, it has direct access to the street on the eastern side through its garden. Apartment B may be accessed via a path rising onto the roof of house A.
All the interiors include a living area which overlooks the garden via a glass wall, a more private study, bathrooms and a master bedroom. Each apartment is accessed via its own pathway, without being able to see into the other units, to respect each person’s privacy.
The Minami-Otsuka district is characterised by high residential density, with very small distances between homes and practically no space between properties, a condition characteristic of the entire city of Tokyo that normally leads to the design of highly introverted buildings with practically no openings onto the outside world, denying any dialogue or relationship with it. Noting the paradoxical sense of isolation generated by homes of this type, that alienation in which we have no idea who our neighbours are, dramatically evident in the Great East Japan Earthquake, Akihisa Hirata makes an unusual choice. He completely rejects this approach, metaphorically bringing the city right into the new building through its composition, materials and colour.
The Overlap House translates the chaotic city of Tokyo, with its road signs, poles and tangles of wires strung between them, into the natural disorder of gardens which “cling onto” the light metal structure: galvanised steel beams and pillars form a rectangular chequerboard of 2700 x 2700 mm units, bare sheet metal profiles and structural plywood. Big glass surfaces ensure continuity between the gardens and the living area in each apartment, prolonging the view from the outside into the house and vice versa.
Lightness, transparency and permeability are thus added to the intrinsic dynamism of a structure with a bold impact on the neighbourhood.
The roof and walls are covered with thin sheets of striped slate forming a motif that imitates the casual colouring of the surfaces in the neighbourhood: warmer, earthy hues at the bottom, more greens, greys and blues rising upwards, in a succession of colours determined by an algorithm. Akihisa Hirata says that: “Breathing life into the history of the city, I created a building that is both new and familiar at the same time”.
Akihisa Hirata’s Overlap House is not simply a single architectural episode based on three units, but in turn constitutes a module which may be expanded or repeated in the neighbourhood. 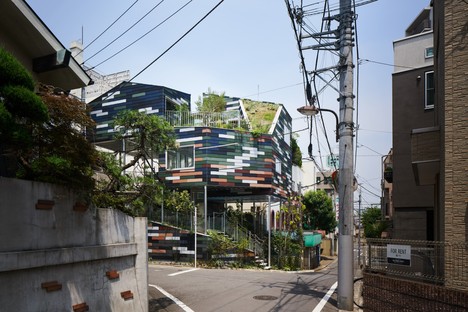 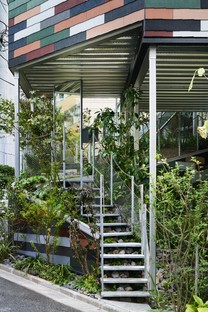 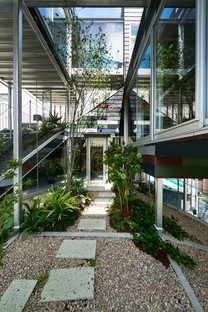 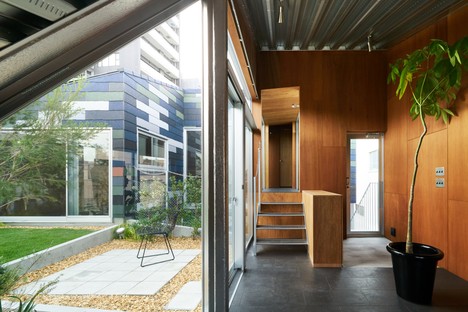 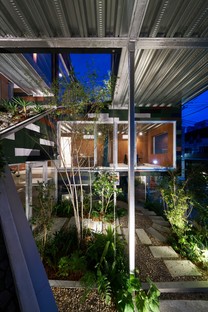 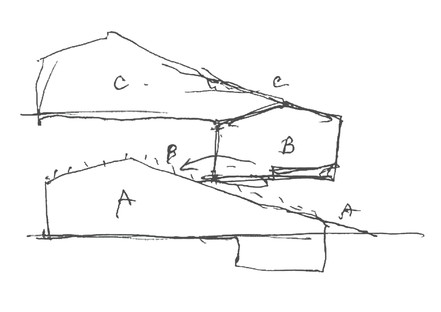 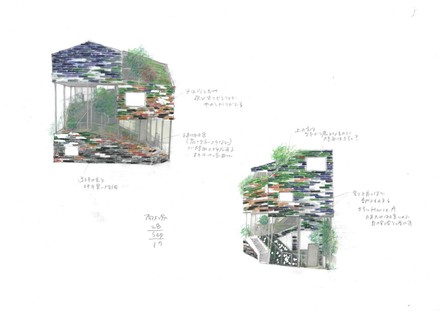 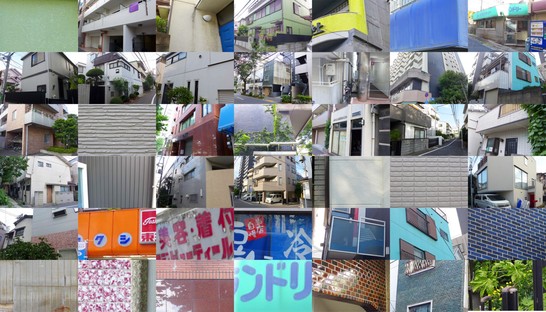 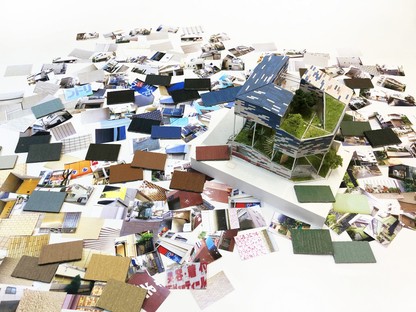 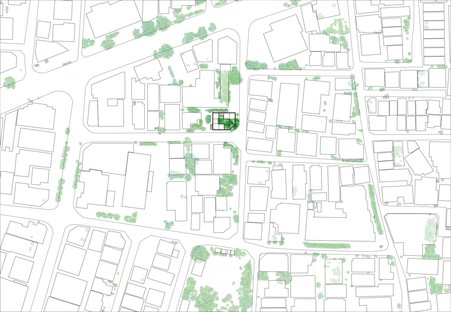 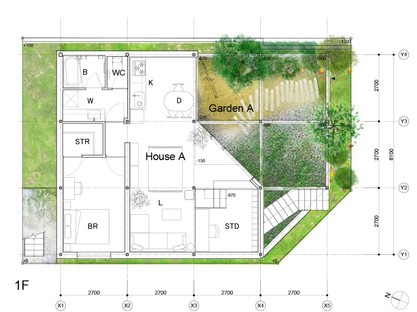 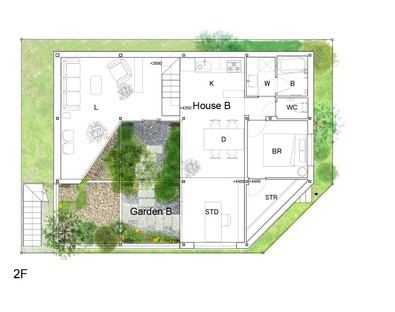 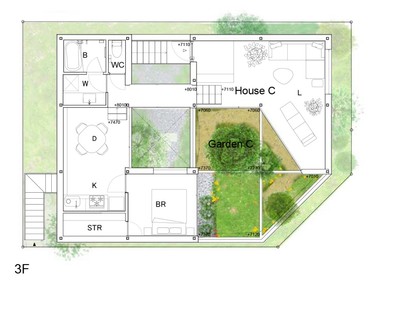 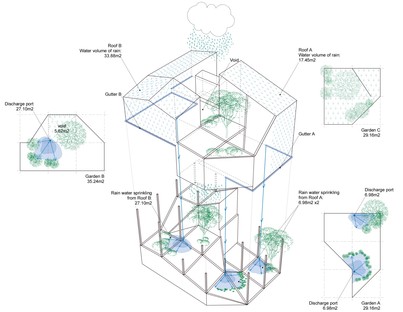 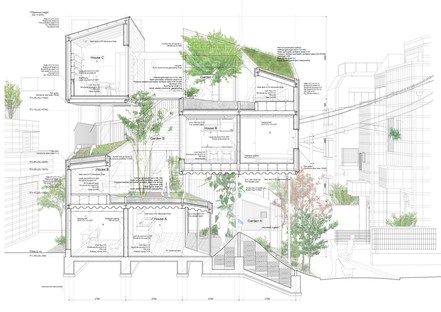 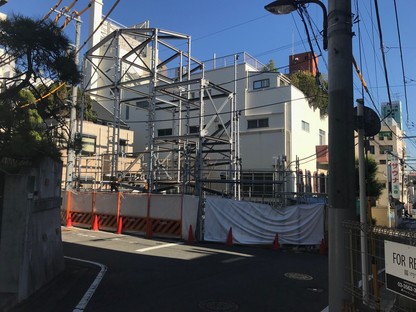