Borneo-Sporenburg, an old port area on the banks of the river Ij, near the centre of Amsterdam, offers an outstanding instance of contemporary town planning, incorporating a commercial and residential complex referred to as "The Whale" because of the unusual shape of its roof - reminiscent of the profile of a huge whale diving under the water and then surfacing. 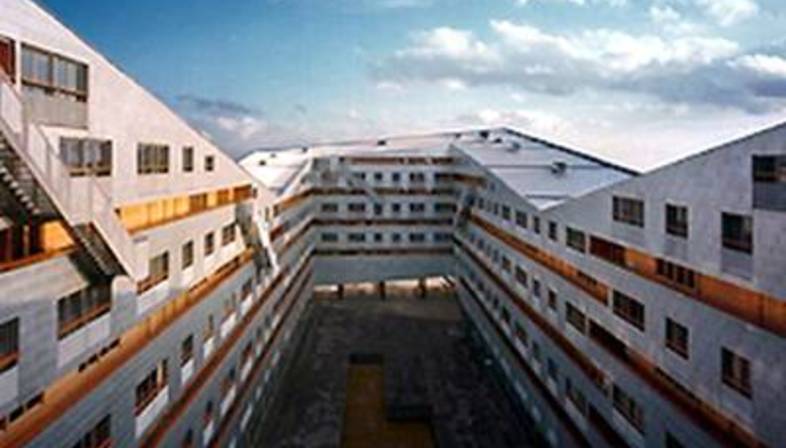 The building, of impressive size, incorporates 214 apartments distributed over thirteen floors and an underground parking lot extending over an area the size of a football field (100 x 50 metres).

The building is covered in natural zinc panels, and its windows with wrought iron gratings are protected with Amsterdam wooden railings; its extraordinary design permits "The Whale" to offer plenty of views of the surrounding environment, including both the dense urban fabric of the city centre and the waters of the Ij River.

To allow natural light to reach even the lowest floors and the inner courtyard of the building, it is raised on two sides to create a central fold increasing the available light.

The shape of the roof follows the route of the sun, drawing a striking shape like a whale's tail and letting space and light into the building's heart.
The result is complete redefinition of the closed block: what has traditionally been an interior domain appears almost like a public park.

The interior of the building consists of an alternating series of galleries attenuating all impressions of heaviness and providing access to the apartments on the same level and on the upper floor; the form created by the sloped lines strongly differentiates the residential units, with truly exceptional apartments on the lower and upper levels of the building.

On the outside, taut lines combine with the aluminium of the roof and the zinc of the façade, imprinting a sort of depth and metropolitan elegance on them; the windows are offset to blend and blur perception of the repetition of floors and create an appearance of definite formal unity extending from the pillared foundations to the roof.

Despite the strong prevalence of empty spaces (openings, loggias, windows)over full (opaque parts of the façade), "The Whale" looks like a solid with an essentially even, undifferentiated surface.

The wooden finishes ensure that the environment is warm and sound-absorbent, as does the outdoor garden, a treed park designed by Adriaan Geuze of West 8; the building's characteristic profile is visible even at night thanks to illumination of the raised ends of the roof.
The local residents have nicknamed the building the "Sphinx", struck by the fish-like shine on it as well as the enigmatic yet simple, pared-down feeling of this block rising out of a sea of lower level constructions. 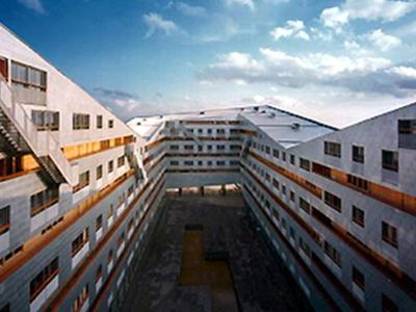 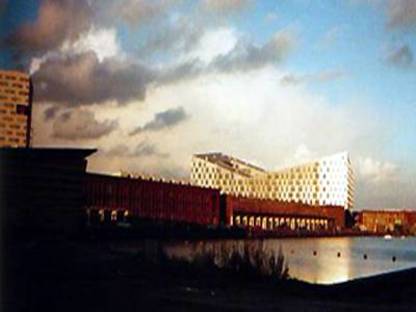 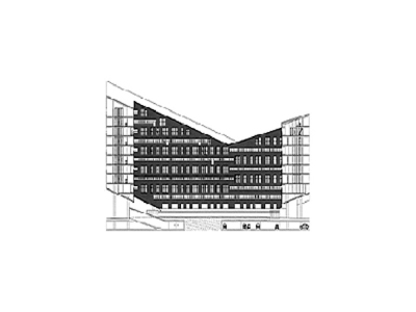 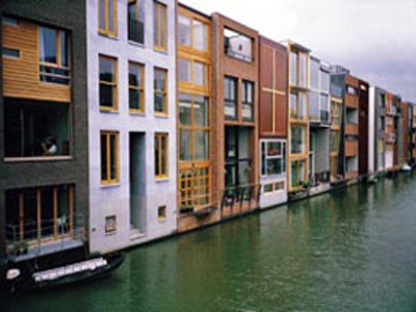