Nithurst Farm, the villa designed by Adam Richards for his family in the English countryside, is the latest manifesto of his architectural poetics. Playful effects involving symmetry along with contrasts in colour and style make this villa a truly surprising experience. It has garnered several awards from the RIBA. 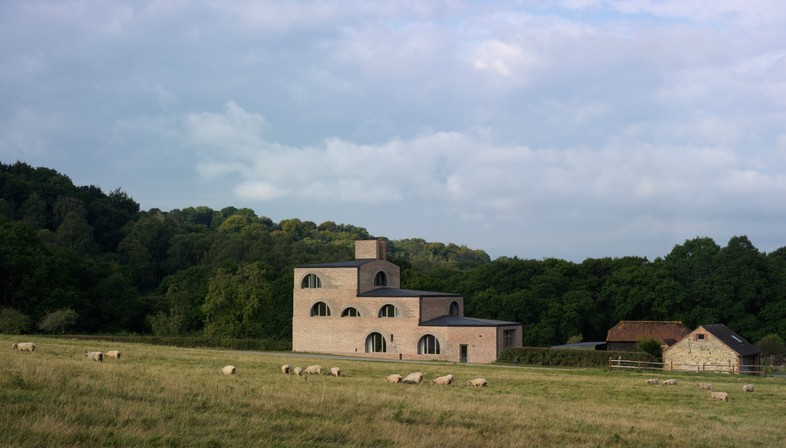 Stumbling across Nithurst Farm as you wander through the English countryside may at first seem like a dreamlike experience. The home that architect Adam Richards has designed for himself and his family in the South Downs National Park, in south-east England, is a remarkable blend of the creator’s personal inspirations, which range from the formal architecture of Sir John Vanbrugh’s Blenheim Palace in Oxfordshire to scenes from the film “Stalker” by Russian director Tarkovsky, by way of the layout of Andrea Palladio’s Villa Barbaro in Maser.
Variations in the symmetry and a stepped design immediately distinguish this three-storey home - which is cloaked in a brick skin and characterised by arched windows - at first glance. A collection of languages ranging from the classical or classicism, to the vernacular, all the way to Brutalism, without any of these labels being able to fully describe the design in an all-encompassing way. Instead, the project embodies its creator’s architectural personality.
Spread across three floors with a symmetrical floor plan which tapers from north to south, the house has a main entrance on the west side in a low, unassuming position. Meanwhile, a small internal flight of steps leads up to a sumptuous main room, four and a half metres high, with a kitchen island, full-size dining table and a smaller breakfast table, which is bathed in light from above by the vast arched windows. The concept of wonder - in the sense of a Carrollian journey of contrasts, from small to large, rustic to opulent - underpins the conception of this and all the other rooms of the house.
The central perspective, accentuated by the converging walls, draws one’s attention to what lies beyond the full-height bookcase on the south wall, which is complemented by a modular textile sculpture by designers Ronan and Erwan Bouroullec, created in collaboration with Kvadrat. The optical illusion of a double door which opens onto a wall provides a frame for a two-way tunnel which leads to a more private lounge. Inside the walls, there are small, rectangular rooms that are hidden away, home to service spaces such as a cloakroom, a study, a pantry and a staircase leading to the first floor, largely lacking any views of the outside in an effort to create the atmosphere of intimacy so often found only in such cosy recesses.
Whilst the kitchen is a space with a markedly industrial style - with its bare concrete walls showing signs of the formwork, the white oiled pine floor, the reclaimed stone and the monochrome canvases - the lounge is a lavishly-decorated alcove draped with wall hangings, curtains and lush carpeting. The sophisticated elegance of the interiors contrasts starkly with the ever-changing nature of the outside world, which is nonetheless an integral part of the living environment, boldly flooding into the house through the huge windows to the south and east.
The first floor is home to the children’s and guest rooms, and from here, a long central staircase - concealed by another double door - leads up to the master bedroom on the top floor. Here, again, we see echoes of the symmetry that characterises the floor plan, which remains constant across every level and helps to reinforce the idea of the internal routes. The forcibly circular layout lends a certain emphasis to the difference between the interior environments and the views of the surrounding landscape. Mirrored bedrooms and dressing rooms lead to a shared bathroom that faces north, towards the open countryside.
In terms of the exterior and the structure itself, the villa is made of concrete, with a black zinc roof and walls entirely covered by a skin of bricks. Due to its unique horizontally-stepped profile, the top floor forms a tower of sorts, an observatory which holds the treasure of the most breathtaking views of the English countryside. The arches - interspersed with small, unexpected openings - and the use of brick are both suggestive of classicism, hence why Adam Richards refers to it as “an industrial ruin wrapped in a Roman ruin”. Contrastingly, the colour palette of the small bricks, which spans from black to dark red to bright red, lends the building a lively feel that is closer to our time, suggestive of a scan of pixels. The darkest brick, which provides a frame for the arches, acts as a trompe l’oeil, giving a compact and uniform volume a sense of three-dimensionality.
The project won the RIBA South East Award 2019, the RIBA South East Building of the Year Award 2019 and the RIBA National Award 2019, and was selected as a finalist for the RIBA House of the Year and the Manser Medal. 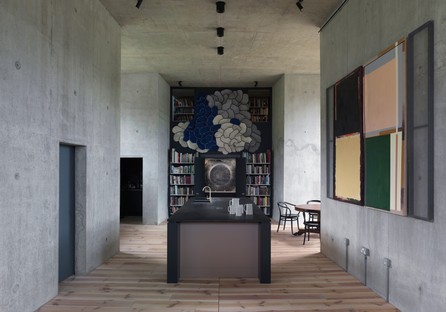 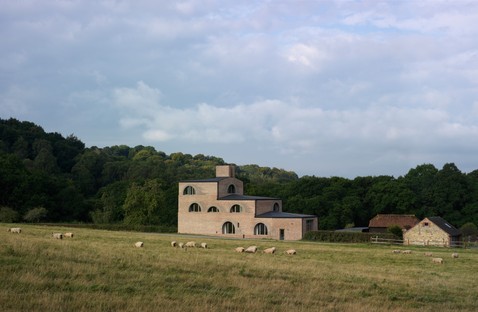 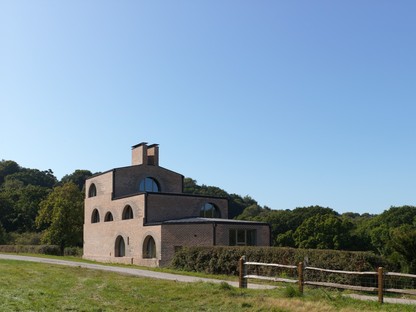 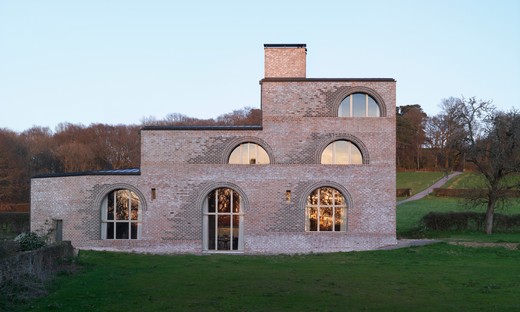 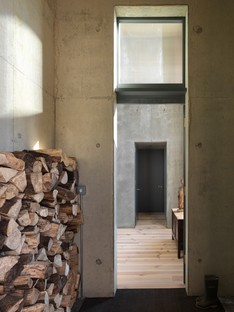 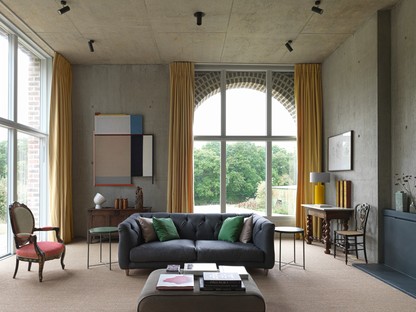 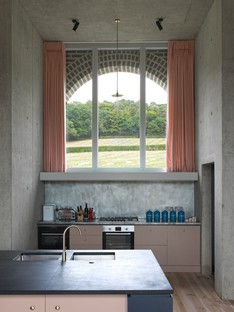 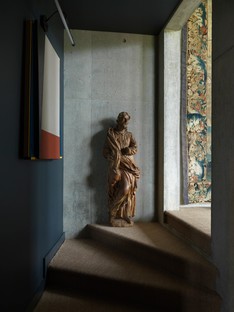 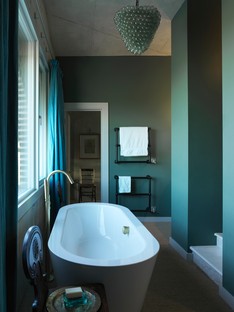 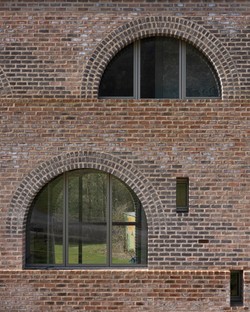 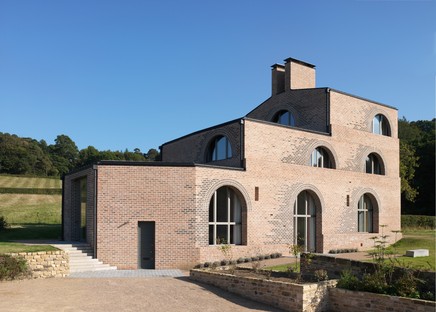 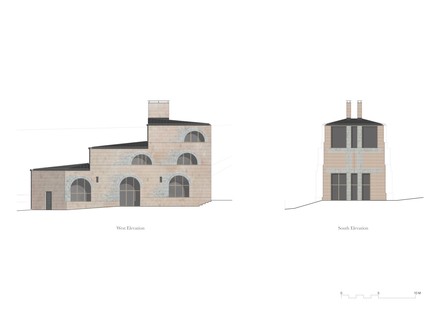 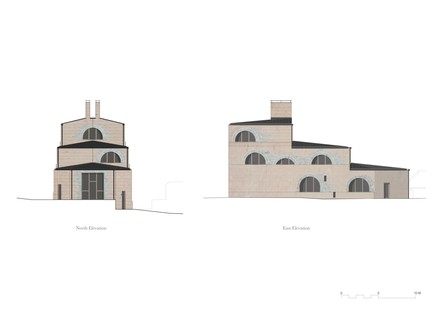 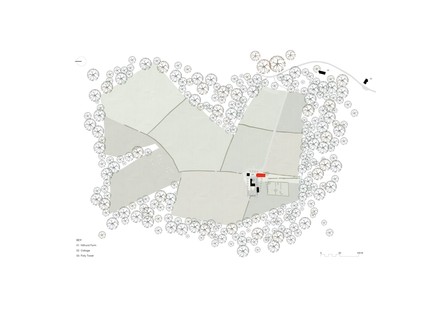 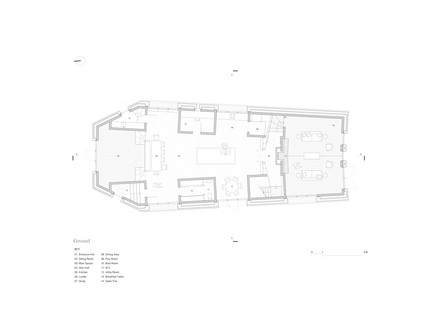 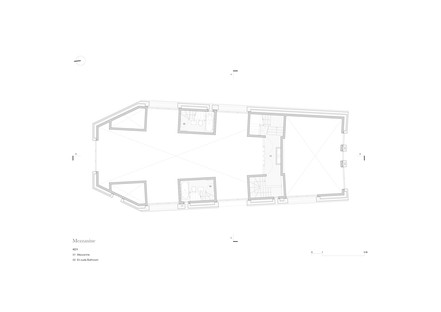 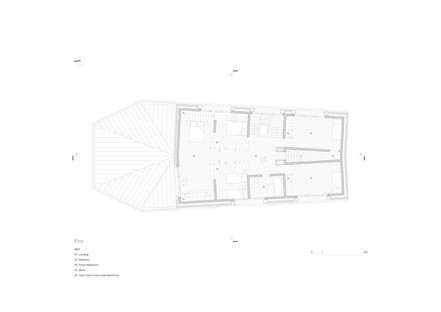 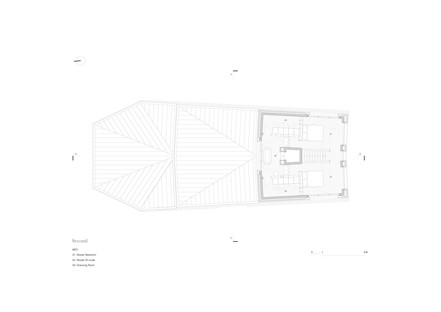 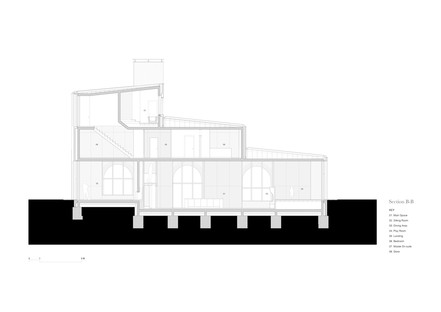 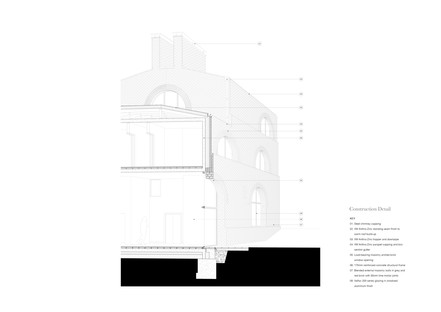 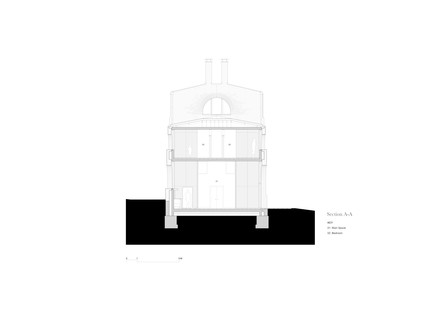