After twenty years of reporting on the world of architecture and design day in, day out, Floornature.com has now become one of the go-to portals for information on the industry. Passion, commitment and constant devotion to issues around sustainability and the environment: these are the fortes of a website that has proven capable of offering new tools for communication, harnessing the power of the image and new architectural languages, and promoting projects and research through incredibly successful international contests such as Next Landmark. By developing new themes and fine-tuning the information it offers, Floornature.com maintains its commitment to this day by constantly improving its columns, with twenty years spent not just monitoring the evolution of projects and materials, but also providing an insight into their consequences at the social, cultural and environmental levels. 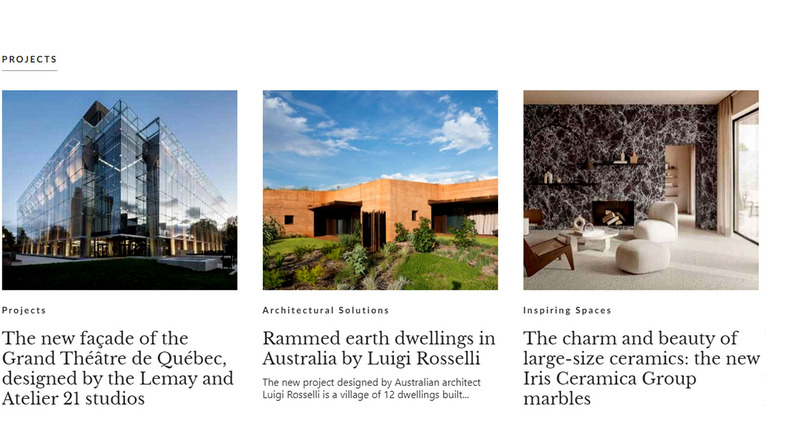 2021 marks the first twenty years in the life of Floornature.com, an international architecture and design portal that is one of the pioneers of brand journalism in Italy.
The brainchild of Romano Minozzi, founder and president of Iris Ceramica Group, the website has, over time, carved out an increasingly central space for itself amongst portals in the industry, becoming a prominent reporter on the evolution of architectural language and online journalism.
Twenty years dedicated to keeping those in the business informed would be an important anniversary for any publication, but in the case of Floornature.com, it is a particularly significant one, as the period spanning 2001-2021 coincides with the point in history when the spread of the Internet radically changed how we view and perceive not just architecture, but also society.
Translated into multiple languages from the very outset, Floornature has always had an international outlook, thanks to its daily pursuit of information that continues today with the very same passion, commitment and careful attention to detail as always.
Journalism that focuses on a close-up examination of projects both large and small from all corners of the world, including some of the most remote areas, with unwavering attention to sustainability issues, exclusive interviews with major industry players, and detailed looks at materials and the most modern technologies around.
In addition to and alongside these activities, the editorial staff of Floornature.com have been collaborating with some of the biggest names in contemporary architecture for the past ten years to run Next Landmark, the international competition promoted by Iris Ceramica Group. A contest that shines the spotlight on projects and research of various kinds that are brand new, highly innovative and representative of the state of the art in contemporary architecture. 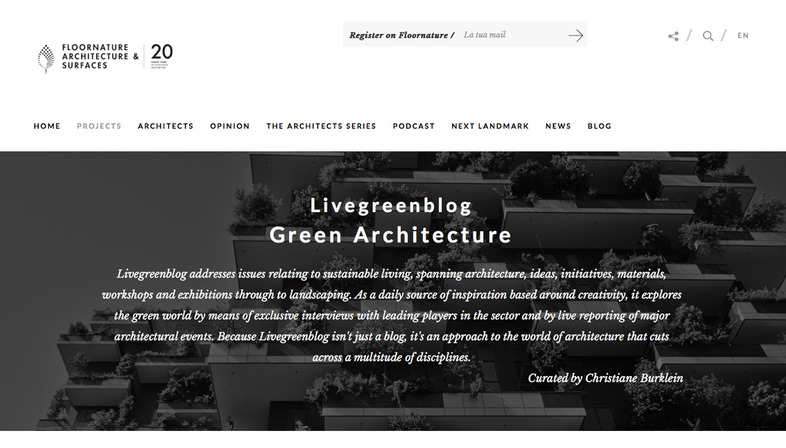 From Projects to Livegreenblog: all the latest in socially and environmentally sustainable architecture.

As previously mentioned, Floornature.com has been updated on a daily basis since its inception.
With a great many years of experience in industry publications behind it, the first management team of Floornature.com, headed up by Marco Casamonti (2001-2007), started exploring the architecture magazine’s true potential in the online world. With a permanent editorial staff flanked by external collaborators, this resulted in several new features being established, including the daily News section, all the latest updates on regulations in the sector, and the projects section, known as Panorama at the time: the only one with an international scope in a sea of Italian-focused websites.
Long before the main web platforms and social networks ever came about, Floornature.com also began to understand - and therefore promote - the power of images in architectural journalism, being a forerunner of many of the fundamental concepts of visual journalism through direct contact with firms, renowned architects and architecture photographers. In this context, the idea of a brand-new feature - namely video interviews with major architects - took advantage of the burgeoning concept of multimedia, an aspect which is now well-established but which was considered truly cutting-edge at the time (bear in mind that YouTube was only founded in 2005).
Over the years, and through Giorgio Tartaro’s time at the helm (2008-2010), Floornature expanded its horizons, offering both Itineraries and Monthly Specials, which further cemented its informational role through participation in annual events and trade fairs.
Since January 2011, Paolo Schianchi has been in charge of editorial content. In addition to the aforementioned Next Landmark competition, one of the most popular new features is Livegreenblog: a section that looks at the world of architecture through an interdisciplinary lens, dedicated “to sustainable living, spanning architecture, ideas, initiatives, materials, workshops and exhibitions through to landscaping”.
The Projects section has evolved substantially over the years, but has always maintained its goal of reporting on architecture ‘in real time’.
In an online world in which, thanks to communications agencies and company websites, seeking out information is no longer the problem it was twenty years ago, the focus has gradually shifted more and more towards the importance of design thinking, in terms of both architectural culture and positive social effects.
As such, the themes of both social and environmental sustainability, as well as the combination of the two and the pursuit of excellence, even ‘at the ends of the earth’, guide the Projects section, in particular thanks to its in-depth looks at the latest arrivals in the industry.
The Biographies section - which is contemporary with and in many cases even ahead of the corresponding individual Wikipedia entries - is constantly updated, checked and revised by the editorial staff through authoritative sources and direct contact with firms.
The Moods section (now Inspiring Spaces) is a thematic journey with a particular focus on interior design and the aesthetics of surfaces, with news on and insights into the latest developments in the sector, ever built upon the essential foundations of environmental and ecological sustainability.

We would like to thank Flores Zanchi for her valuable contribution of information regarding the first ten years of the portal’s life. 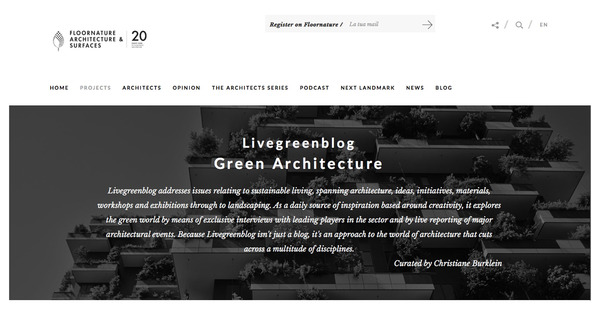